On a country road in Montgomery County, North Carolina, at the foot of Buck Mountain, is the grave of a man named John Jacky Morris. He is my third great grandfather. His gravestone says he died 7 Dec 1874 at the age of 86. Census records are consistent that he was born in Virginia about 1785, perhaps Mecklenburg County, per family legend. He married Amelia (her maiden name is unknown). Their first child, William Morris, was born about 1813. Family stories indicate that John came to Montgomery County, North Carolina in 1805 and settled near what is now River Road. John Jacky lived his life in Montgomery County as a gold miner, tunneling through and digging gold from the Uwharrie Mountains. Only atDNA and YDNA testing have uncovered the family of John Jacky Morris.

More than 500 miles away, in Limestone County, Alabama, in a small town that was once called Lentzville, near what is today, Athens, near the Elk River, is the grave of a man named John Matthew Morris.

A male descendant of John Matthew Morris carries not just the same YDNA of my third great grandfather, John Jacky Morris, but also shares 14 cM of atDNA with my male Morris cousin, who is also the YDNA tester. While that is not a lot of shared DNA, I think we are definitely within the genealogical time frame where records exist that may be able to link these John’s together and show who their common Morris ancestor was.

John Matthew Morris was born 29 Jan 1845 probably in Madison County, Alabama to Andrew Jackson (also seen as Johnston) Morris and Margaret, called Peggy, whose maiden name I do not know. 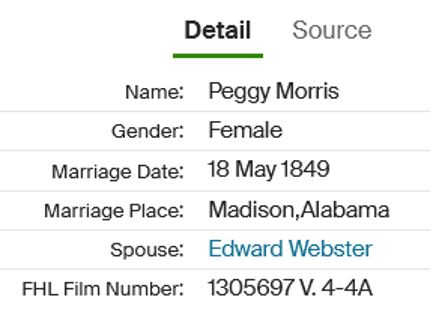 Margaret was enumerated on 11 Nov 1850 in Madison County, Alabama along with Edward Webster, her husband, and three of her Morris children, Thomas (b. 1839), Nancy (b. 1842), and John (b.1845). The other children belong to Edward Webster from a previous marriage. 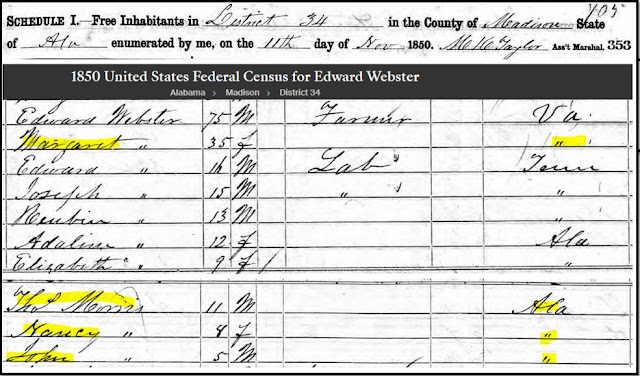 On 18 Jun 1860, in Madison County, Alabama, Margaret is enumerated as head of household with four children, Thomas, Nancy, John, and Andrew (b. 1852).

Andrew is probably not the child of Margaret’s first husband, Andrew Jackson (or Johnston) Morris as he was born after 1849, when Margaret remarried to Edward Webster. Interestingly though, it is Andrew's death certificate that lists his father's name as Andrew Jackson Morris. YDNA testing on Andrew's male descendants might be able to determine if Andrew is a Morris or a Webster.

In 1880, Margaret is living with son, Andrew and his wife who is also named Margaret.

According to Find a Grave, John Matthew Morris, son of Margaret, married Martha Matilda McElyea on 27 September 1865 in Limestone County, Alabama. All are buried in the old Lentzville Cemetery.

John Matthew Morris and Martha Matilda McElyea were the parents of the following children:

Note: Find a Grave memorial has Clytus R. Morris 1894 – 1962 listed as the child of John and Martha, he is actually their grandson and son of Walter.

Limestone County, Alabama was formed in 1818 from land given up by the Chickasaw and Cherokee. That same year, Revolutionary War veteran John Henry Lentz, and wife Savilla, settled on the banks of the Elk River. Lentz was granted land for his military service. Eventually, the family's settlement grew to the community of Lentzville. Lentzville Road follows the river where the growing town had thrived. 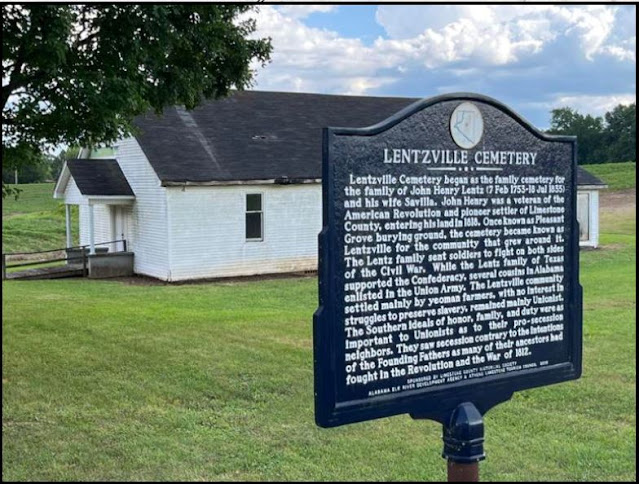 The Lentzville Methodist Church still stands in front of the Lentzville Cemetery where John, Savilla, and members of their family are buried. Savilla's headstone in Lentzville cemetery reads, “Pioneer mother of eleven children.” The other side of the stone reads, “She came to Limestone County in 1818. Was burned on April 25, 1847 and died May 6, 1847.” 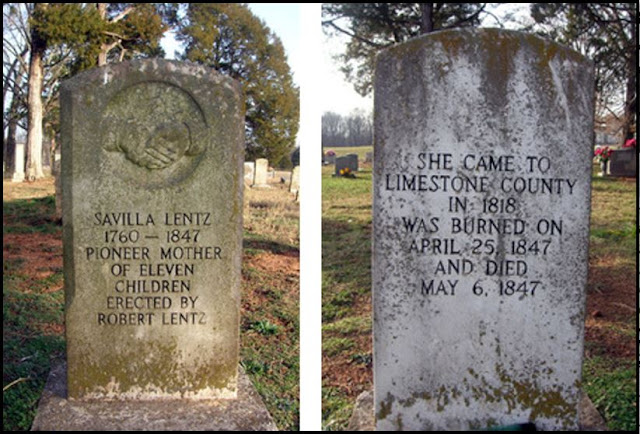 Henry Lentz applied for his Revolutionary War pension in 1832. He was noted as aged 75years. He served four tours in the Revolutionary War. His first three tours were served in 1775, 1778, and 1779 while a resident of Mecklenburg County, North Carolina. His fourth tour was served in 1781 under Captain Dred Harris while residing in Montgomery County, North Carolina. After the war, Henry states that he lived in Montgomery, Rowan, Lincoln, and Buncombe, North Carolina. He moved to Blount County, Tennessee and then to Madison County, Alabama, then to Limestone County, Alabama. 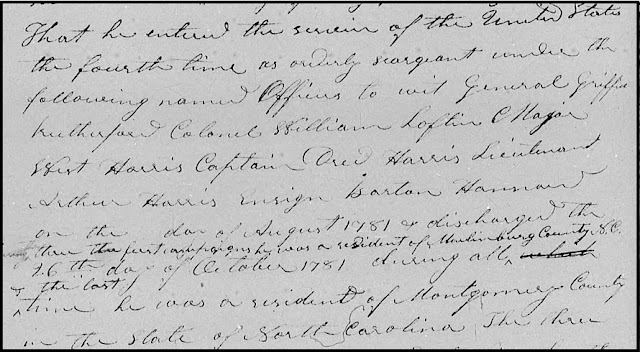 Posted by Uwharrie Roots at 7:02 PM