John Morris (1745-1815), Granville County, North Carolina, (married Phebe Tudor), is the Morris line that my male Morris cousin and uncle Y-DNA match to. We are in Group M29 at FTDNA Morris Project with several other Morris testers.

Samuel Morris (1710-1790) is supposedly the brick mason from Hanover County, Virginia who, in the 1740s, began reading the Bible and additional religious works in his home that resulted in the founding of Morris Reading Rooms across Virginia when his home outgrew the number of people who were showing up for prayer and Bible readings. Unfortunately, the tester was not willing to provide their entire line of descent from Samuel.

John Matthew Morris (1845-1913) Madison and Limestone Counties, Alabama is the son of Andrew Jackson (or Johnston) Morris born about 1809 in North Carolina. This is a very close match as the tester also shares 14 cM of atDNA with my cousin who did the YDNA test. I wrote about John Matthew Morris in my previous blog, “Of Common Things.”

Phebe Tudor is the daughter of John Tudor. He was born about 1710, Isle of White County, Virginia. John Tudor died in 1782, Granville County, North Carolina. He names his wife as Elizabeth and his six younger children as Valentine, Tabitha, Winifred, Bloomer, Daniel, Anne. He names three other children, presumably older ones, as Henry, John, Phebe, who are probably children from a first wife. After several years of research, I have been able to haphazardly connect John Morris and Phebe Tudor in my family tree through my maternal line, but not through the paternal line that I need to connect to. The good news is that my male testers do not have the surname Brock or Pinion in their direct lines, so it should be fairly easy to keep any DNA matches separated between them and me. What is fascinating though, is that the atDNA and the YDNA testers all descend from Stephen Morris, son of John and Phebe, the atDNA through Stephen's daughter Tabitha and the YDNA through his son, Littleton. What a small world! 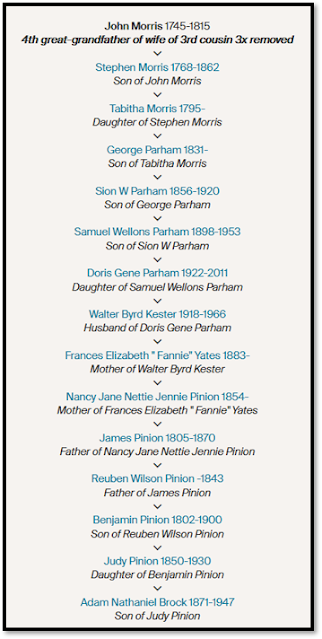 While I can find no estate file for John Morris, his wife, Phebe Tudor Morris, did have one. Her son, Stephen, whose line my paternal line YDNA matches to, was the Administrator for the estate of Phebe, his mother. 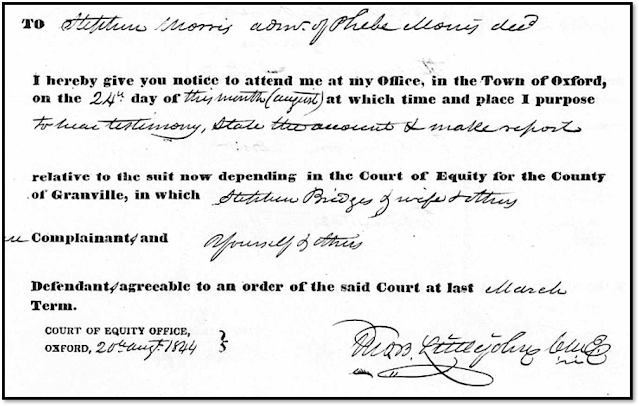 One of the best things I have ever seen in an estate file is when the Administrator lists out all the heirs and how they are related. Phebe Tudor Morris’s estate file does not disappoint in this regard. Shown in the estate file are all the next of kin. 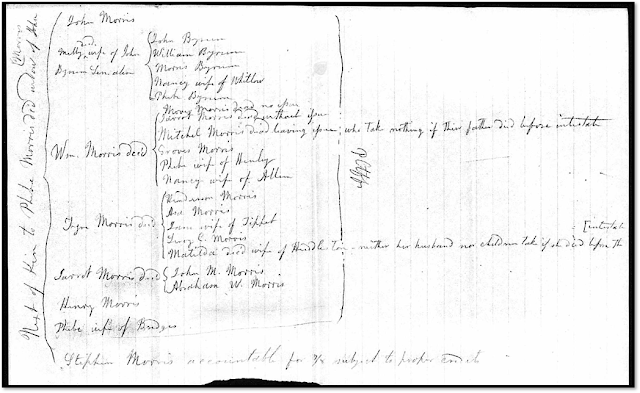 John and Phebe, like so many others of that era, were slave owners. In the estate file can also be found a list of slaves by name. 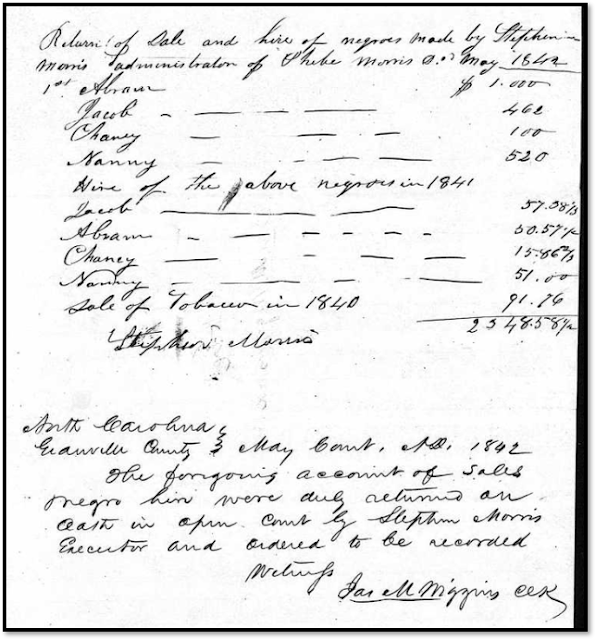 A list of inventories sold at the estate sale provides a clue to another mystery. Thomas Gresham bought several items and I suppose he must have been a close friend to the family. At this time, I do not know who Thomas Gresham is, but I was not surprised to find that the Gresham family and the Morris family knew each other in Granville County and maybe even in Virginia.

Along with the Morris YDNA match who descends from John Morris and Phebe Tudor, my male Morris cousin also has a Big Y-700 DNA match to a male who descends from James Gresham 1759 VA – 1837 Granville County, North Carolina. There was definitely an NPE (non-paternal event) that took place in this particular Gresham line.

Phebe Tudor Morris’s estate file also outlines a dispute over the division of land. Allen Thomasson provided testimony that he lived with Phebe Morris in 1839 and Thomas Gresham states that he did the “crying sale” for the Morris property.

Because of this, it was no surprise for me to see a Y-111 DNA match to my male cousin with the surname Thomasson

John and Phebe Tudor Morris did have a son named John. Unfortunately, this John is not my John. This John Morris married Francis Johnson, daughter of Archer Johnson Senior of Amelia County, Virginia. Francis, called Fanny, and her twin sister, Kizzy Mitchell, provide a joint testimony for their brother-in-law, William Allen, who filed for a Revolutionary War pension in 1832 in Granville County, North Carolina.

Kizzy Mitchell provides the proof needed to show that she and Fanny Morris are the daughters of Archer Johnson. William Allen married another sister, Elizabeth, called Betsy. 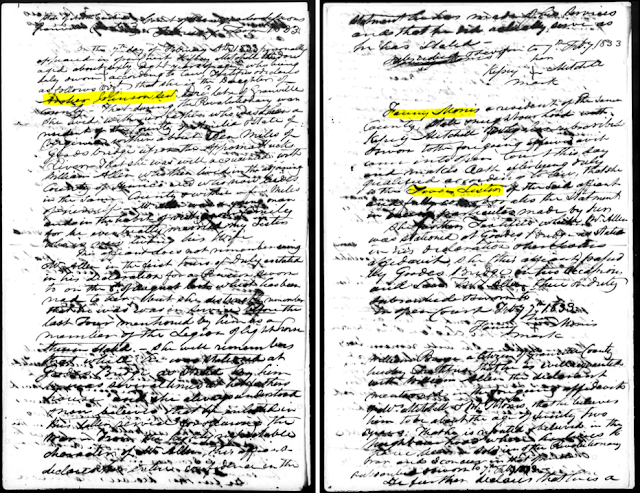 Posted by Uwharrie Roots at 7:34 PM