Granville County, North Carolina formed from Edgecombe in 1746 by mostly Virginia farmers who were concentrated on their efforts to grow tobacco. Some, if not most, of these men were second and third sons, “the lesser sons,” who would not inherit the majority of their father’s estate in Virginia and being that land was becoming scarce in the area, these men turned to new opportunities as land in the northern area of North Carolina opened for settlement.

Whether or not John Dozier, presumably the son of Leonard Dozier II and Elizabeth Ingo of Lunenburg County, Virginia, was a lesser son or not remains to be seen. He migrated to Granville County as early as 1750, just two years after his mother Elizabeth died, his father having died some 10 years prior. John obtained a Granville grant for 640 acres on both sides of Mill Creek and another grant in 1753 for 557 acres lying on the east side of Mill Creek. 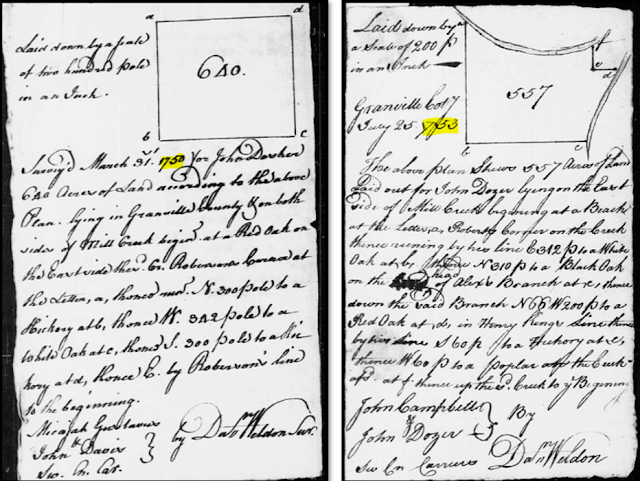 James Marks, the first-born son of John and Hannah Marks of Richmond County, Virginia, inherited the vast majority of his father’s estate. In the will of John Marks, his oldest son James was left “all the land with all and every appurtenance thereunto belonging to be his property.” The “lesser sons” Fennell and his brother William, just lads when John Dozier left Virginia, followed on the heels of Newman and Dye relatives to Granville County, North Carolina to discover if any opportunities awaited them there. 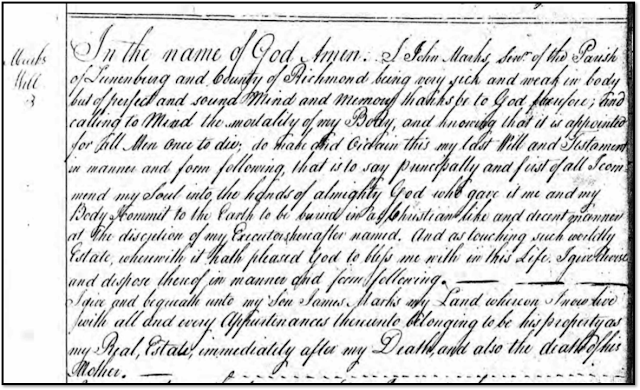 Arriving in Granville, North Carolina in the mid-1700’s, these men settled in the area of Smiths Creek, on the Roanoke River on the North Carolina-Virginia border and took up farming. The area became Bute County in 1764 when Granville was divided and Warren and Franklin counties in 1779 when Bute County was abolished.

Deed records for old Bute County are held by Warren County today and are free to view at Family Search.

Ann Marks, the sister of John Marks and aunt to James, Fennell, and William, is identified in the 1735 Richmond County, Virginia will of her father William Marks Jr. In that same will, William Marks Jr. identifies his friend Elias Fennell as an executor of his will, the other executor being named as John Deane, who was his son-in-law.

In a deed dated 3 Nov 1735, Elias Fennell becomes the guardian of the Marks estate until John Marks attains to a lawful age. 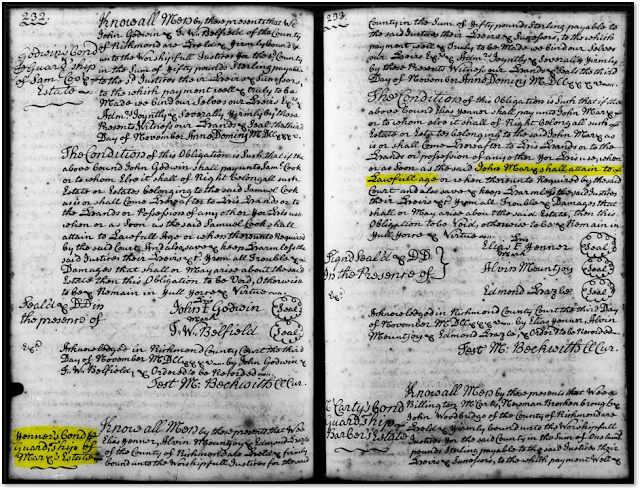 Elias Fennell wrote his will in 1739, just four years later. He identifies Ann as Ann Dozier, so we know Ann married between the years 1735 and 1739 to a man with the surname Dozier. 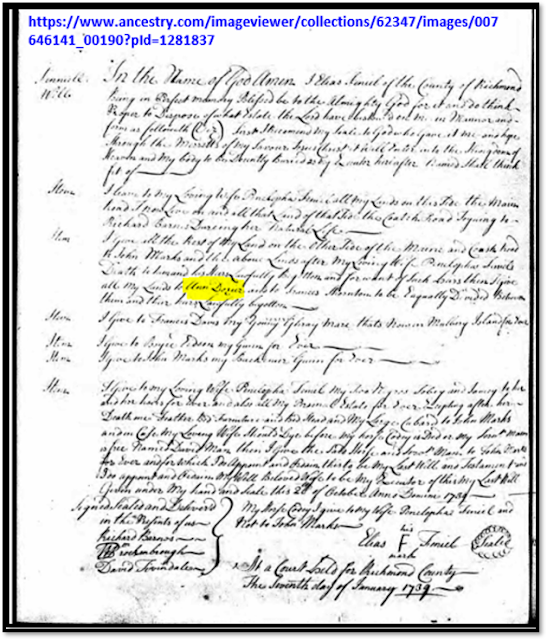 Multiple sources claim that Ann Marks married Leonard Dozier, often called the III (third), son of Leonard Dozier II and Elizabeth Ingo, and brother to John Dozier who arrived in Granville County, North Carolina about 1752, or earlier. Other sources I read state that Leonard Dozier III married a woman named Ann Gayle. While there are multiple source cards found on Ancestry.com, these are all listed as individual family collections, and not actual Bible, County or Parish records, and offer no real proof of either marriage.  If anyone has real proof, please send it to me via the Blog. 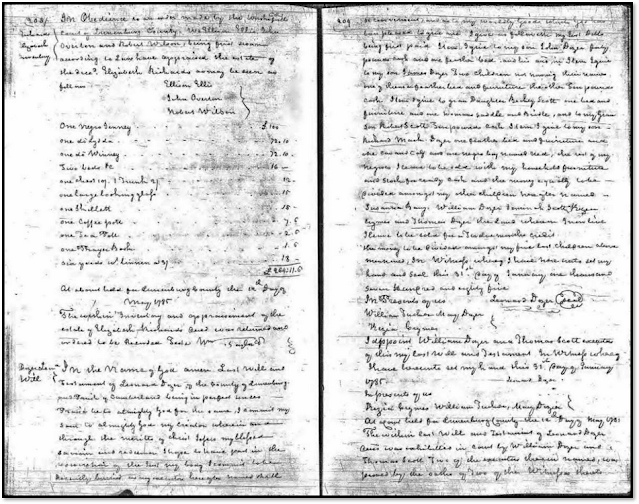 The circumstantial evidence that Ann Marks married Leonard Dozier III, while not overwhelming, was compelling enough for me to think there is some kind of family dynamic going on between the Dozier, Marks, Dye, Newman, and Wright families. I am not able to find the surname Marks mentioned in any Dozier records that I have reviewed thus far, with the exception of Leonard Dozier III’s will naming his son Richard Mark Dozier. I was, however, able to document a paper trail between the Newman, Dye, Wright, and Dozier men of old Granville / Bute counties. The deeds showed that these families were neighbors.

Based on the family circle found in Richmond County, Virginia and Granville / Bute / Warren County, North Carolina, the evidence thus far leads me to believe that Ann Marks may have married Leonard Dozier III, or at least a member of this Dozier family, and family members moved between Virginia and North Carolina between 1750 and 1770.

Leonard Dozier III is the son of Leonard II and Elizabeth Dozier. Leonard III is mentioned in the 1748 will of Elizabeth, his mother. She also mentions John Dozier as a son. 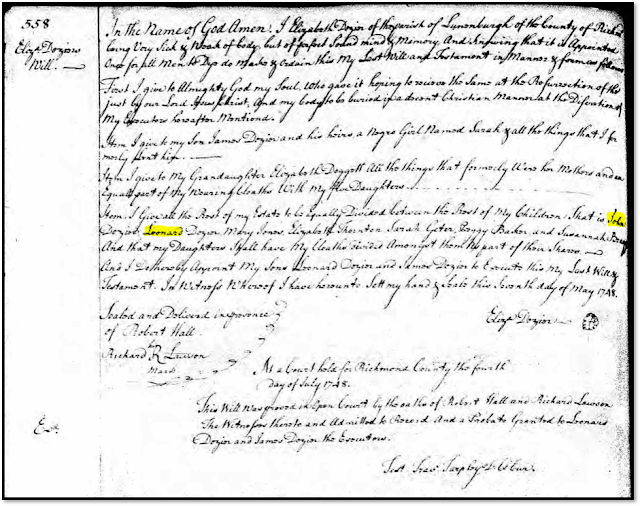 If Ann Marks did marry Leonard Dozier III, this would make her children first cousins to William Marks and Fennell Marks, their father John being a brother to Ann. William and Fennell Marks migrated to Granville / Bute County and lived near the Dozier family. Fennell Marks married Amy, who is either the daughter of Thomas and Catherine Dye Newman, or another close relation to them. Thomas Newman is found as a witness to many Dozier deeds and is listed as a neighbor on those deeds. Ann’s children would also be first cousins to John Dozier’s children if John and Leonard are brothers.

These family surnames are found together in the area of Richmond County, Virginia and again in Granville / Bute / Warren Counties, North Carolina. The circumstantial evidence here points to a very close family relationship and it would not be surprising at all to find these families migrating together from the same area in Virginia to the same area in North Carolina.

In Warren (Bute) County Deed Book A, 1764-1766, is found several transactions made by and between the Dozier family. Pages 35-36 shows a deed made 29 Sep 1764, from John Dozier, of the county of Bute, Planter, to James Dozier for 50 pounds Virginia money, 200 acres of land lying on the south side of Smith Creek, joining Harrison’s line and runs to Leonard Dozier’s corner at the Ridge Path.

I found Smith Creek on the 1770 John Collet map (North Carolina Maps). The Collet map was published just 6 years after the Dozier deed, so it was pretty current with the time. Smith Creek is located in what was then the Parish of St. John and is a tributary of the Roanoke River and sits on the Virginia / North Carolina line.

Two months prior to John Dozier selling to James Dozier, Leonard Dozier of Bute County on 13 Jul 1764 sold to George Blanton of Lunenburg County, Virginia for 65 pounds current money of Virginia 174 acres on Smith Creek. John Newman was a witness to this deed.

A month later, on 13 Aug 1764 Joel Certain (Sartin) and his wife Ruth of Bute County sold to John Dozier for 25 pounds current money of Virginia 130 acres on Little Creek, adjoining the lines of Stroud and Nicholas. James and Leonard Dozier were witnesses to this deed.

Little Creek may be Little Stone-house Creek, or it may be a creek that is no longer identifiable. Land grants for Little Creek show William Stroud who was granted land in 1752 next to John Dozier and adjoining Nicholas line. Searches for Nicholas produced one land grant on the west side of Hawtree Creek crossing Little Creek.

Susannah Wright Certain lived until 1853. Her brother-in-law, William Marks, moved her to Chatham County after the death of her husband, John Certain, in Granville County. Susannah is found on the 1850 Census for Chatham County, North Carolina. In her household is Mary Newman. In the household of her son, John, who is living next door, is Bennett Newman. I have not been able to identify Mary or Bennett Newman yet but am certain they are somehow related to the Newman family who lived in old Bute County. 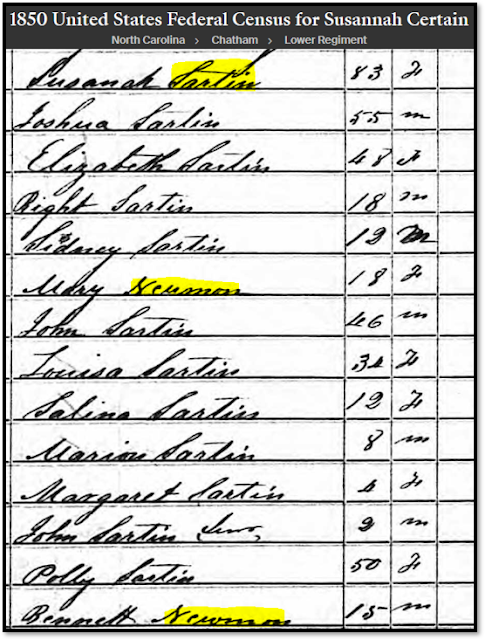 On 11 Apr 1765 John Dozier and Sibellah his wife of Bute County sold to George Wilson for 25 pounds Virginia money 100 acres on the west side of Smith Creek adjoining Eaton, Lampkin, and Blanton. Witnesses were Thomas Wilson and John Newman.

The Wilson’s are definitely another family that was intertwined with the Newman’s. I have not dug deep enough yet into that family, but do know that after Fennell Marks died in 1777, Amy Newman Marks married Richard Wilson. From that marriage was born Martha Wilson who married William Paschall.

William and Martha Wilson Paschall were still living in 1850 in Nutbush, Warren, North Carolina. Neighbors included John D. Tucker, son of John and Elizabeth Marks Tucker who married 15 Dec 1798 and are found on the 1830 Census living in Smiths Creek, Warren County. Both are listed between 50-59 on that Census. I cannot help but wonder if Elizabeth is the child of Fennell and Amy Newman Marks, perhaps born shortly after Fennell died in 1777 as she is not mentioned in his estate file. Her age would certainly fit!

As a side note, I have seen several sources who claim that Sibellah Dozier’s maiden name is Wilson but have not been able to find actual proof of it.

On 28 Jan 1765 John Dozier and Sibellah his wife of Bute County bequeathed to Leonard Webb and Sarah his wife 100 acres on the east side of Rocky Branch, (Hawtree Creek) joining Robert King and John Fowler. Witnesses were Thomas Wilson and James Dozier.

It is my guess that Sarah is the daughter of John Dozier. If that is the case, then John Dozier would have been born about 1722. Sarah is married, age around 18, and is being given land, probably as a wedding gift from her parents. The date of the deed is 1765, making Sarah born about 1747. Subtracting 25 years from that puts John’s birth about 1722, give or take a few years to allow for additional children.

On 9 Oct 1765 George King and Frances his wife of Mecklenburg County, Virginia sold to James Dozier of Bute County, North Carolina for the sum of 60 pounds Virginia money 210 acres of land on the south side of Smith Creek joining Robert King along the Camp Branch and Israel Roberson’s old line. Witnesses Wood Malone and George Roberson.

On 8 Oct 1765 James and Mary Dozier sell to William Dye Jr. 70 acres of land in Bute County beginning at Col. Harrison's corner and joins Nichols’ line. This looks to be a portion of the 200 acres on Smith Creek that John Dozier sold to James Dozier in 1764. Notice that the Ridge Path is now, a year later, called “the old road.” Witnesses were George Newman and Bennett Wood.

William Dye Sr. is the brother of Catherine Dye, wife of Thomas Newman.

Moving through each of the deeds provides more and more information about the area where the Dozier and their allied families lived. In a deed dated 2 Jan 1767 John Dozier and Sibellah his wife of the Parish of St. John, Bute County, deeded to John Wood 80 acres of land on the Ridge Road and joining the lands of Thomas Newman, George Newman, Ship Allen Pucket, and William Smith. Witnesses were Thomas Newman, Phil Burford, and Perriwell Wood.

Perhaps the deed that brings the most clarity that the Dye, Dozier, Newman, and Marks families are linked back to Richmond County, Virginia is one dated 9 Feb 1768 between John Hawkins and Mary his wife of the Parish of St. John sold to Fauntleroy Dye of the colony of Virginia, Richmond County for the sum of 100 pounds Virginia money 400 acres of land on Dead Creek in the county of Bute. Witnesses were Phillip Burford, William Wright (father-in-law to William Marks), and Thomas Newman (father-in-law to Fennell Marks).

The Dye family is another ancient family with roots back to old Rappahannock (Richmond) County, Virginia. They were in the Jamestown area when it was still the capital of Virginia, before being moved to Williamsburg in 1699.

Fauntleroy Dye is the son of Avery Dye and brother of Catherine Dye who married Thomas Newman. This couple, Thomas, and Catherine are the parents, or some other very close relation, of Amy Newman who married Fennell Marks. Fennell is the brother of my ancestor, William Marks, who married Temperance Wright, daughter of William Wright, who is a witness, along with Thomas Newman, to the Hawkins-Dye deed shown below.

Posted by Uwharrie Roots at 2:22 PM