Genealogy research on my Morris line makes me feel like a dog chasing its tail! I have been building out my family tree for Diza Morris, my second great aunt, trying to learn more about the Lucas family. Diza married Thomas Lucas late in life, 17 May 1900, at the age of 65. I was hoping to find some distant connection to my Morris family through the Lucas family, or one of their allied Hutson/Hudson families, that would lead to more clues on the origins of my Morris family.

But alas! I think Diza’s marriage to Thomas Lucas was more about the fact that Diza was 65-years old, never married, and Thomas, was 65 and a widower and it just made sense to the match makers of the family that Diza and Thomas simply needed each other.

And so, John Milton (J. M.) Clodfelter applied for the marriage license. 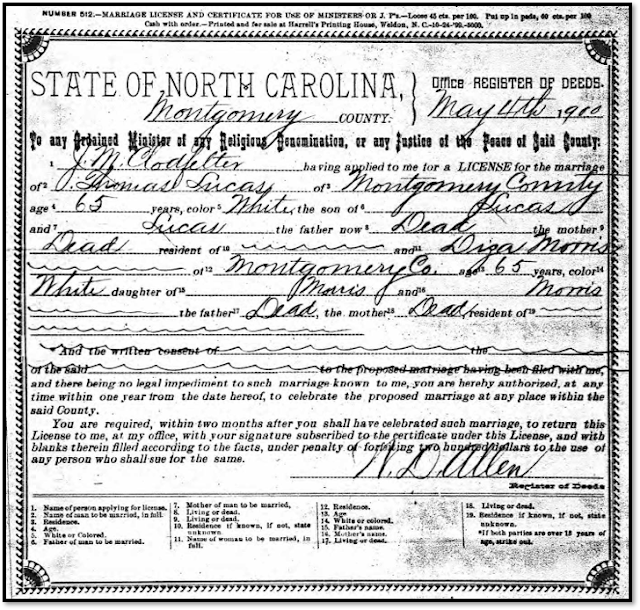 John Milton Clodfelter is the son of Raymond and Elizabeth Morris Clodfelter, and the great nephew of Diza Morris, through his mother, Elizabeth. John Milton’s sister, Martha Clodfelter, married Elzivan Lucas, the son of Thomas Lucas and his first wife, Mary Polly Hutson (sometimes seen as Hudson). They married on 13 Jun 1857 in Randolph County, North Carolina.

Robert Hutson was born about 1784 in North Carolina. He is listed in the 1853 estate file of his brother, John, who never married, and as dying prior to his brother. So, that puts Robert’s death before 1853.

Nancy, who intermarried with John Brewer

William, infant with no regular guardian

John, infant with no regular guardian

Noah, infant with no regular guardian

Polly, infant with no regular guardian, she later married Thomas Lucas in 1857

Rebecca, infant with no regular guardian

Nelson, infant with no regular guardian 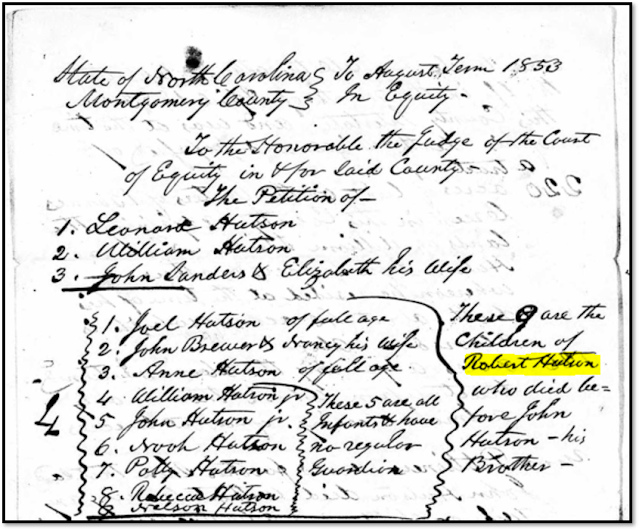 Robert is listed on the 1850 Census for Montgomery County as a farmer, with wife, Elizabeth, age 48, and most of his children. Neighbors are his brothers, John, listed as a Shepherd, and William, listed as a Laborer. 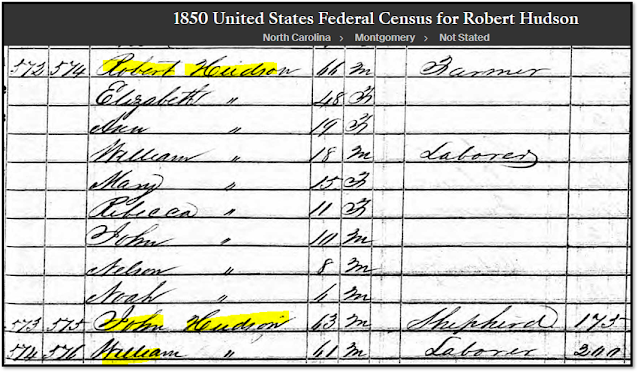 John’s estate file also lists the seven children of his brother Peter, who also died before him (John).

Polly, who intermarried with James Neighbors

Barbara, who intermarried with William Pool

Joseph, infant with no regular guardian

Jacob, infant with no regular guardian 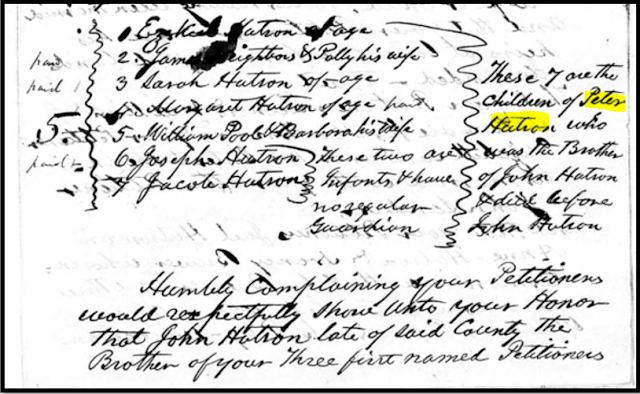 The estate file names William, Leonard, and Elizabeth, who intermarried with John Sanders, as the first three named Petitioners, and notes they are the siblings of John. John is named as the uncle of all the others. 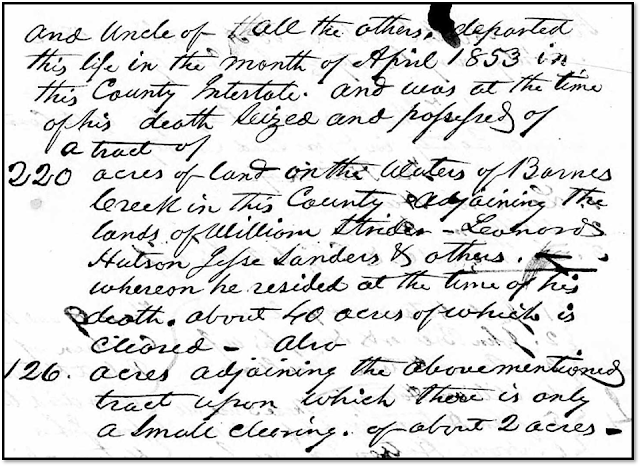 John departed this life in the month of April 1853 in Montgomery County, intestate. At the time of his death, he was seized and possessed of two tracts of land.

220 acres of land on the waters of Barnes Creek in the county of Montgomery adjoining the lands of William Strider, Leonard Hutson, Jesse Sanders, and others, whereon he resided at the time of his death. About 40 acres of which is cleared.

126 acres adjoining the above-mentioned tract upon which there is only a small clearing of about 2 acres.

The land would descend to John’s siblings, nieces, and nephews as he was never married and had no children.

And so it was that the legal heirs, not able to divide the land between them all, asked for the sale of the lands and the proceeds to be divided between the heirs at law. 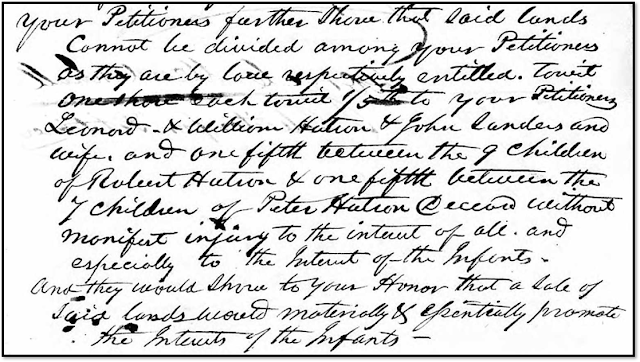 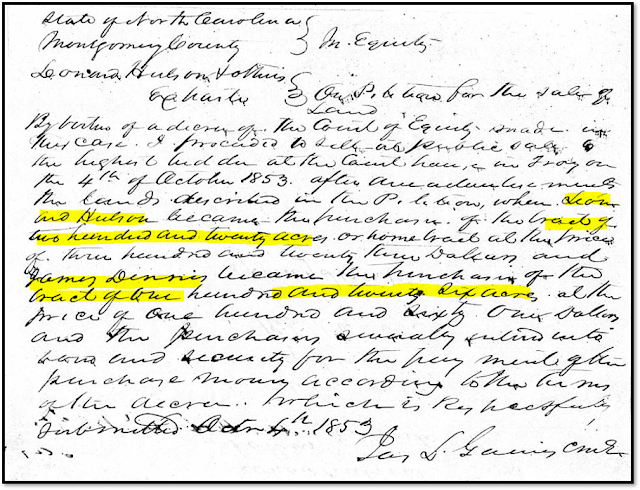 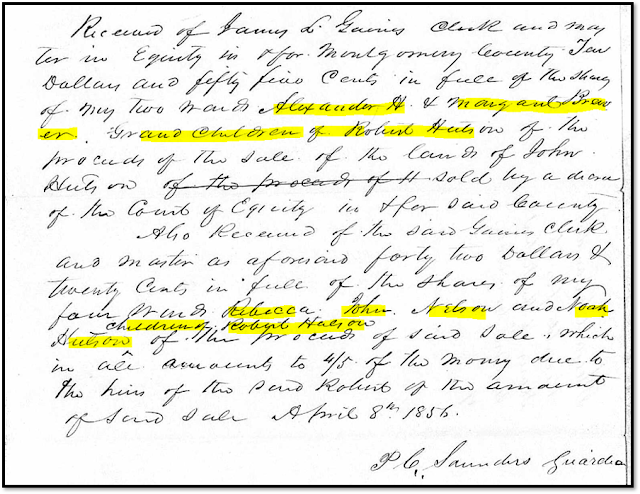 Leonard Hutson, brother of John, died about Oct 1865. His nephew-in-law, James Neighbors, who had married Mary, daughter of his brother Peter, filed his complaint as a creditor against Allen Jordan who was the administrator of the estate of Leonard Hutson. 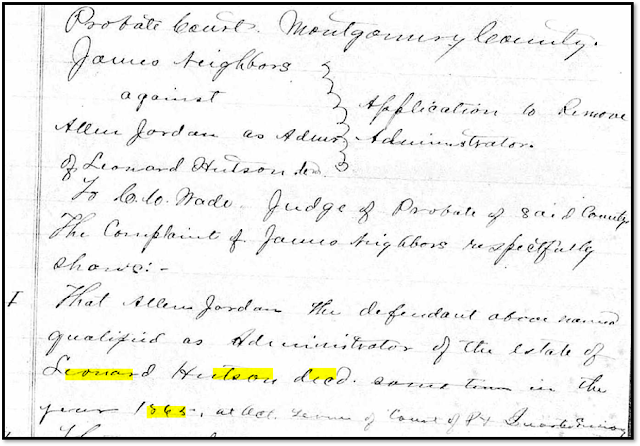 Things get a bit complicated in 1874 when James Neighbors files a petition in Randolph County against Allen Jordan, administrator of the estate of Leonard Hutson, in an attempt to collect the distributive share of the estate of John to Elizabeth Hutson Sanders, sister of Leonard.

In this action, James Neighbors names John Hutson as the father, rather than the brother, of Elizabeth. This can lead to confusion for researchers if they are not diligent and exhaustive in their research to find as many documents as possible to truly understand the dynamics of their ancestor families. One might assume that the father of Elizabeth is John, because a court document said so; however, mistakes were made all the time in documents back then, just as today. Taking all documents into account it can be understood that John is the brother of Elizabeth and not her father.

The court papers go on to say: this is a suit that began prior to the C.C.P. to recover from the defendant as Administrator of Leonard Hutson, deceased, the distributive share of one Elizabeth Sanders to wit one fifth part of the estate of her father (should say brother) John Hutson which the plaintiff alleged had been collected by the intestate of the defendant under a power of attorney from said Elizabeth and which she had assigned by deed to the plaintiff.

After proving the deeds of assignment to the plaintiff one Saunders was introduced as a witness and plaintiff offered to prove by him that he was the administrator of John Hutson and as such paid over to Len Hutson the distributive share of John Saunders and wife in the estate of John Hutson. This evidence was objected to and ruled out by the court.

The plaintiff then offered to prove by the same witness that he paid a certain sum of money to the said Len Hutson to with$72.59 for Elizabeth Sanders her distributive share in John Hutson’s estate. This evidence was also ruled out on objection by defendant.

The true inquiry was, did Len Hutson the agent receive the distributive share of Mrs. Sanders as her share in John Hutson’s estate from anybody? If so, that agent is bound (by law) to pay it over to the rightful owner. 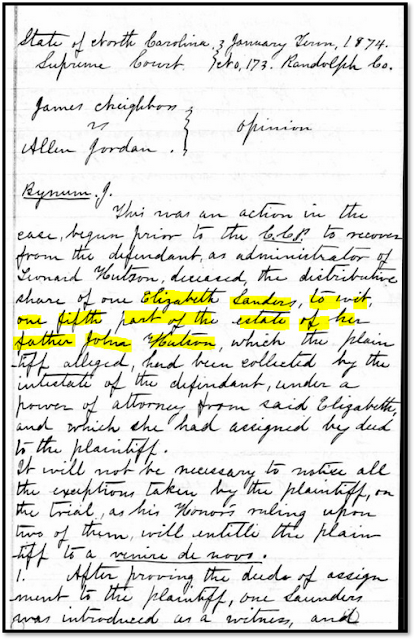 An 1855 Deed found in Montgomery County shows that John and Elizabeth Sanders sold their interest in the estate of John Hutson for ten dollars to Leonard Hutson, brother of Elizabeth.

Know all men by these presents that we John Sanders and Elizabeth his wife for and in consideration of the sum of ten dollars to us in hand paid the receipt hereby acknowledged have bargain and sold assigned transferred ... to Leonard Hutson all our interest right and claim to the purchase money arising from the sale of the land of John Hutson late of the county of Montgomery … the aforesaid Elizabeth Sanders being one of the sisters and next kin of the said John Hutson deceased and entitled to one fifth part of said purchase money which is hereby assigned and transferred. 28 Mar 1855. 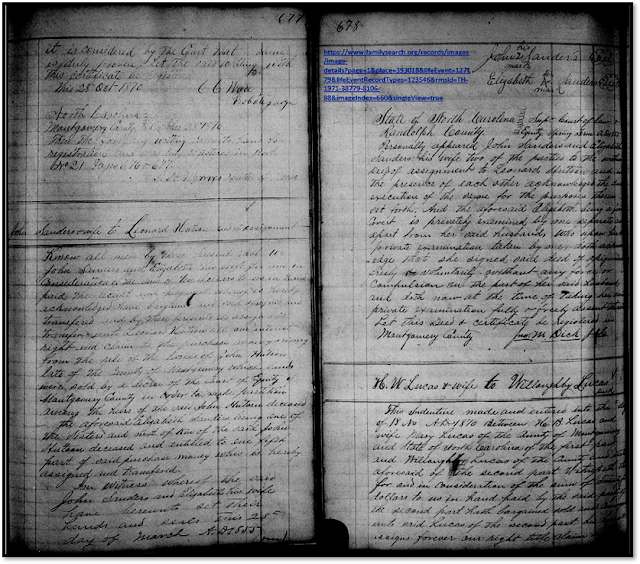 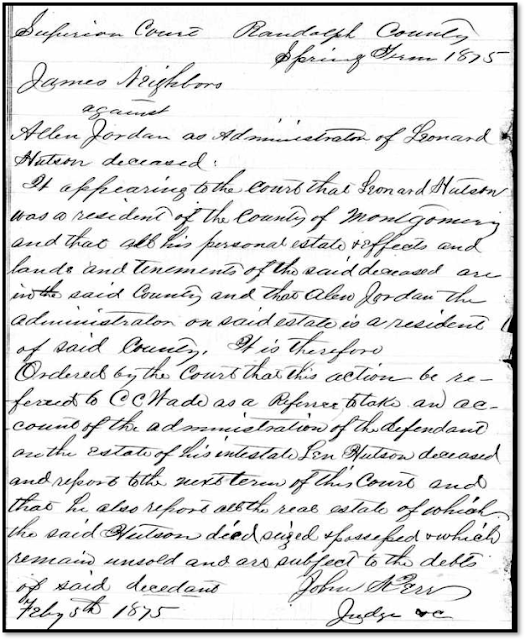 Going back through the 1853 estate file of John Hutson, I found that D. Hutson, on 29 Feb 1854, received from James Gaines, clerk and master in equity, the share belonging to John and Elizabeth Sanders, as well as his own. D. R. Cochran was a witness. 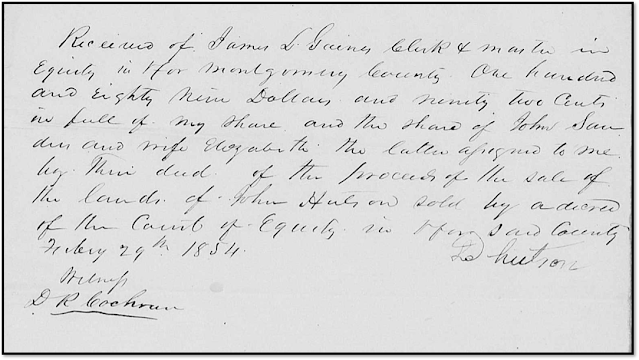 It would appear that Leonard Hutson married Mary between 1825 and 1830. Their first child, Allen, was born about 1830 per the 1850 Census data for Montgomery County. Allen went on to marry Lecy Graves Strider, the widow of Isaiah Strider. I have no information on Ritty, listed as 5 years of age or Bradley, listed as 1 year of age. 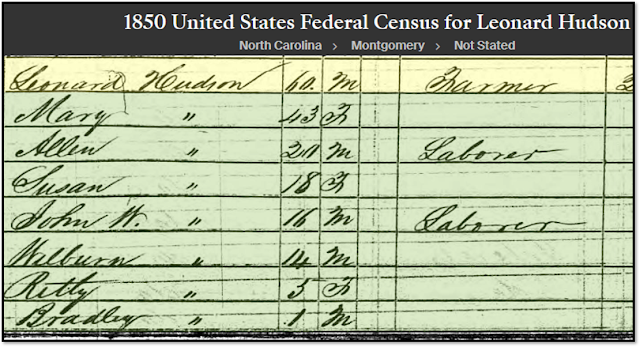 1860 shows Leonard living next door to his brother, William, who looks to be unmarried. John Wesley and his brother Winborne will die in the Civil War in 1862, just months apart. Susan goes on to marry Gilbert Nicholas. 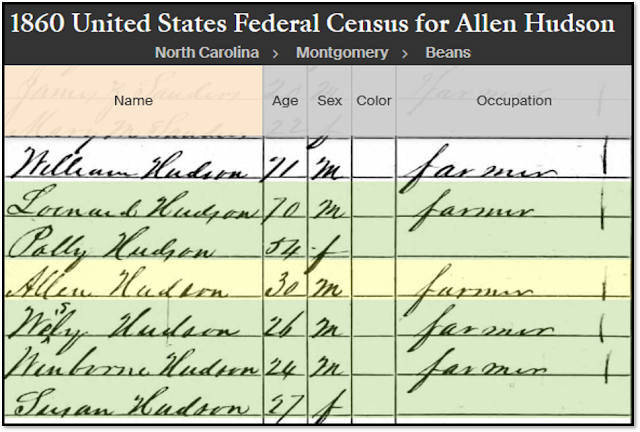 Allen Hutson died in 1878 and there are two estate files for him in Montgomery County on Family Search.

Allen and Lecy Graves Strider Hutson had three children, Martha, of whom I know nothing about, Dora, who married Gilbert Tucker, who descends from the Randolph Tucker line, and Effa who became the second wife of William Pinkney Hurley, who is the son of Ann Hurley, who is the sister of Rosetta Hurley, who had an illegitimate child with Pinkney Shaw.

The question in my mind – is Pinkney Shaw the father of William Pinkney Hurley? 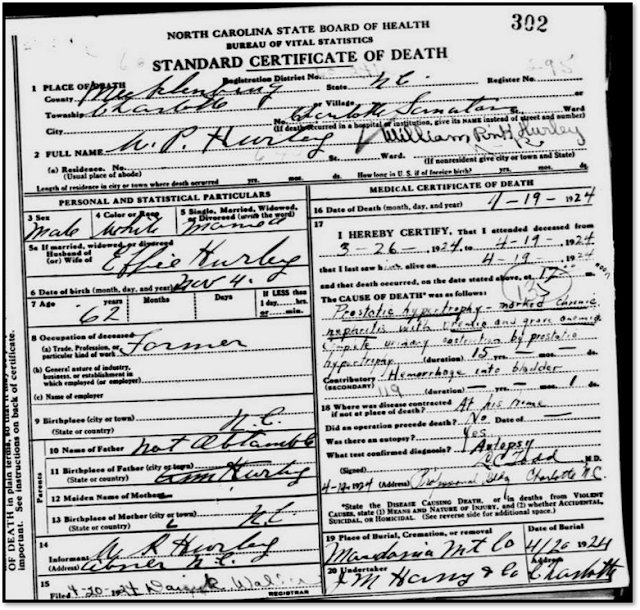 I have come full circle with the Hutson / Hudson family – my research leading me straight back to my own Morris line!

Pinkney Shaw was the husband of Eliza Morris, daughter of John Jacky and Amelia Morris and sister to Diza. Both Eliza and Diza are my second great aunts. Pinkney, by the way, is buried in the Morris cemetery on River Road in Uwharrie, Montgomery County close to Eliza. 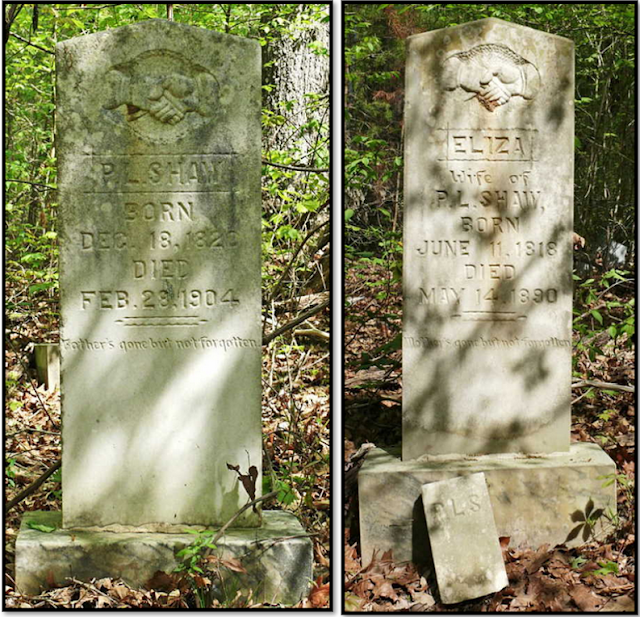 Posted by Uwharrie Roots at 1:09 PM