I have very faint, but affectionate, memories of Dora Carter, who was known to the family as “Aunt Dorie.” In fact, while I do remember my grandmother talking about Aunt Dorie often, I recall but one actual memory of her. I could not have been more than 4 years old at the time. My grandmother asked my older sisters to “watch out” for Aunt Dorie while she went to another part of the house to get something. The memory is fuzzy, to say the least, but I knew, that even though Aunt Dorie was a grown up, she required special care and attention. So, my sisters and I “watched” Aunt Dorie until grandma returned.

Dora Mae Carter was born 12 Jun 1900 to Leah Susan Lilly Carter, daughter of Green and Heathy Fesperman Carter. I do not know who Dora’s father is and because she never had children, no DNA testing can be done on her line. There is much speculation, and some family trees at Ancestry, list Frank Blalock as her father, but there is no actual proof of that.

Leah Susan Lilly Carter had seven children, all out of wedlock. There is an 1879 bastardy bond for the oldest child, John, showing Frank Blalock as the man who fathered him. I have seen no DNA tests on John Carter’s descendants, so I do not know if they have matches to descendants of Frank Blalock or not.

All our Blalock matches look to be coming through a Morgan line that was in Chatham County, North Carolina with the Blalock family and a Dennis line that married into the same Blalock line after they arrived in Montgomery County. 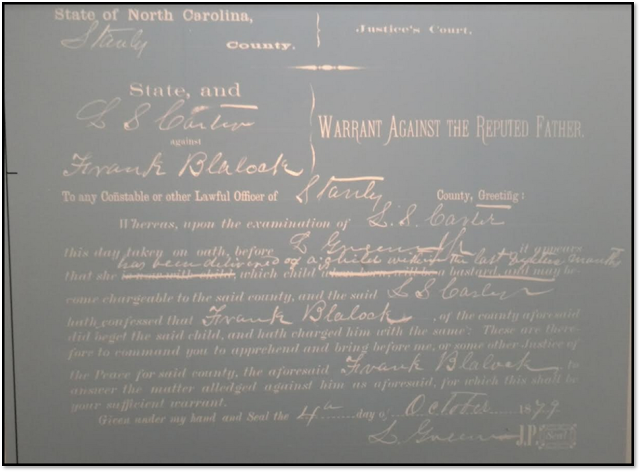 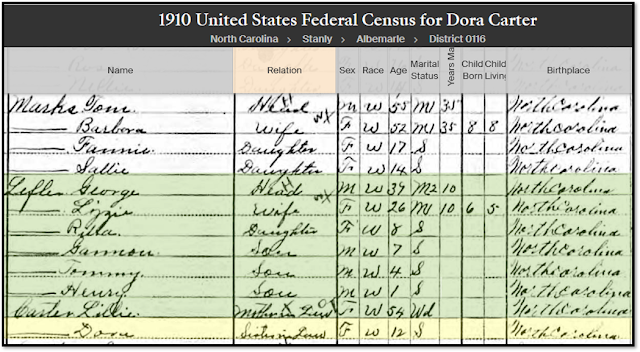 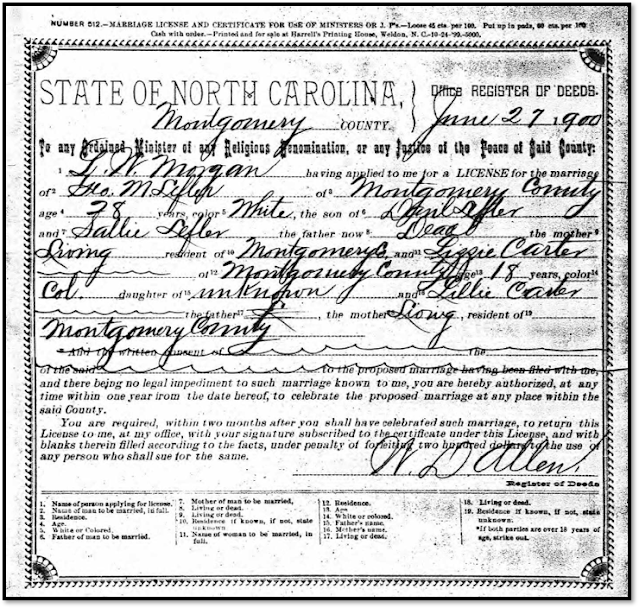 The couple were married by A. T. Morris, a Justice of the Peace, in Eldorado Township, Montgomery County, at the home of Tom Marks. C.H. Clodfelter, J.E. Lucas and S. C. Mandly (?) were witnesses to the wedding. 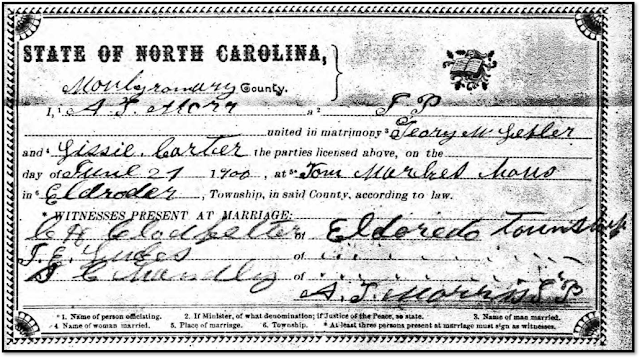 In 1920, Dora is living with her mother, Lilly, in Albemarle, Stanly County, working as a spinner in the cotton mills. Lilly lists herself as a widow, but to my knowledge, she never married.

George and Lizzie, sister of Dora, were the parents of Henry Lefler, born 1908. On 29 Oct 1926, Henry, his Aunt Dora, and his first cousin, James Holt, son of Henry and Pattie Carter Holt, sister of Lizzie, were walking down the Salisbury Road in northwest Albemarle when they were struck by a car driven by Mr. Chandler. Henry Lefler died as a result of being struck. James Holt was hurt, but not seriously, and he recovered. Dora was hospitalized with a fractured skull and was not expected to recover. Mr. Chandler was not driving recklessly, nor did he have any malicious intentions towards the trio. He did not see them and was blinded by the lights of an oncoming vehicle. 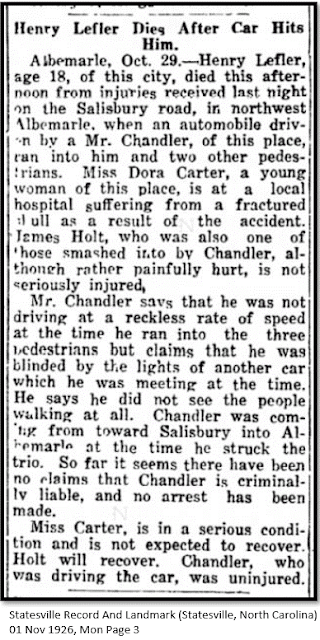 Dora did recover enough to hold down a job. She is found in 1930 living with her brother-in-law, Henry and sister, Pattie and working as a spinner in a cotton mill in Albemarle.

In 1940, Dora is still living with her sister, Pattie and still working in the cotton mills of Albemarle.

In 1950, Dora looks to no longer be employed. She still lives with her sister, Pattie in Albemarle.

I am not sure if Dora progressively got worse as she grew older, or if something else happened to her. I last saw her in the early 1970s at my grandmother’s house and she required constant supervision then. I would like very much to hear from the Holt family whom Dora lived with for the majority of her life. 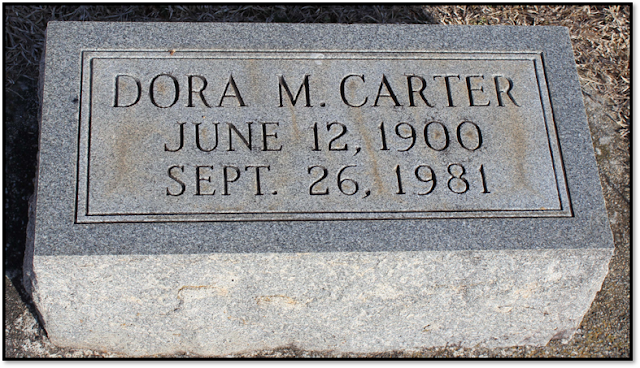 Posted by Uwharrie Roots at 5:59 PM