The first person mentioned in the division of land in the John Kirk Dec’d estate file is Parham Kirk.

Division the first lot No 5 valuation $561 to Parham Kirk bounded as follows Beginning at a pine standing about fifteen rod south of the county line and runs thence south 256 poles crossing Ryals (Riles) Creek to a sweet gum the corner of lot No 7 thence with that line and the line of lot No 6 North 50 East 238 poles to a pine by two pine pointers thence north 30 poles to two pines on Miller’s line thence as his line West 34 poles to a pine (?) thence North 70 poles to a corner thence West 150 poles to the beginning. Containing one hundred and eighty-seven acres as will appear in the above plat. 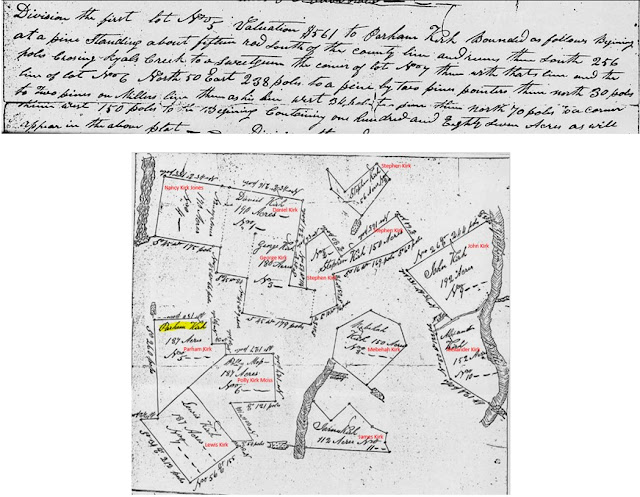 Parham Kirk was born about 1785 in Montgomery County, North Carolina to John Kirk Esq. I have seen multiple names for John’s wife and Parham’s mother, but have not seen any documented evidence yet as to what her name is. On the 1790 Census, Parham is listed in the household of his father, John Kirk, as a male under age 16. He has two brothers, also under age 16 and two sisters, whose age is not known as females ages were not listed on the 1790 Census. 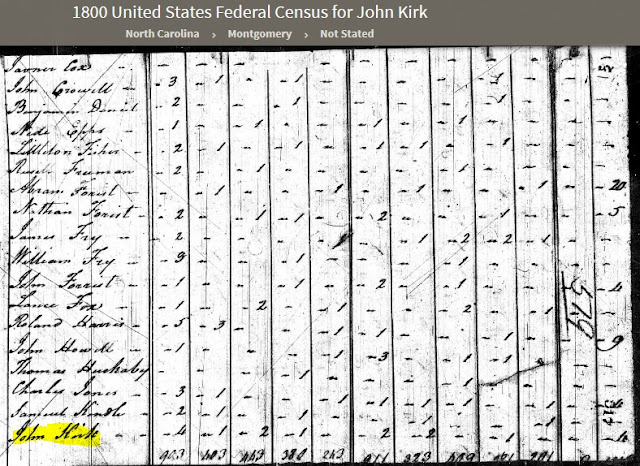 By 1810, Parham is living on his own. What is interesting is that he is shown with one male 10-15 and one male 16-25 and one slave. If Parham was born about 1785, he would be about 25 years old in 1810, not old enough to have sons between the ages of these children. No females are showing in the household, so it is presumed that Parham is not married, or his wife has died. Whomever these children are remains a mystery.

Since the 1820 Census of Montgomery County was destroyed, researchers must look to other records to confirm that a person was in the county between the 1820 and 1830 Census years. In 1823, a bill, read aloud and passed, authorized Parham Kirk, late Sherriff of Montgomery County, to collect the arrears of taxes due him. This old Newspaper clipping shows that Parham was still in Montgomery County and active in the community. 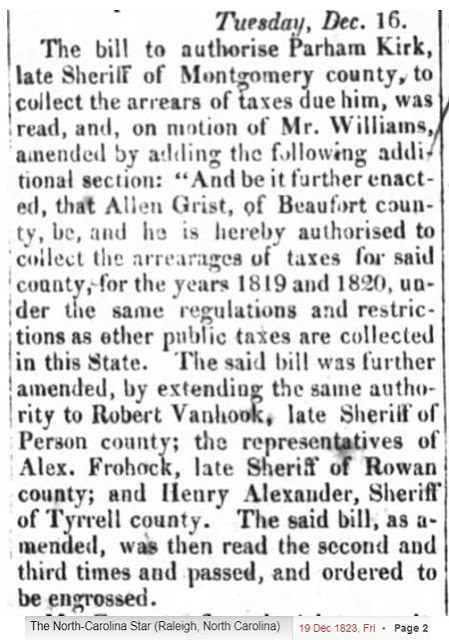 In 1828, the Western Carolinian (Salisbury, North Carolina) reported that a bill had passed to allow Parham Kirk to make a purchase of 350 dollars for the purpose of furniture for the government house.

In 1830, Parham, still residing in Montgomery County, is listed between the ages of 40-50, his actual age is 45 years in 1830. Residing with him is one male between the ages of 10-15. This child is not the same child as was seen on the 1810 Census. Those children would have been grown by 1830. So, who is this mystery child? Also note, there are no females living with Parham Kirk.

In 1850, we find Parham, age 67, making his birth year 1783. Parham is a farmer, living alone in Cabarrus County, North Carolina between Catharine Stewart and George Barnhardt. He lists himself as being born in Montgomery County.

On Monday, 10 Jul 1854, the Fayetteville Semi-Weekly Observer (Fayetteville, North Carolina) reported that Mr. Parham Kirk of Stanly County (cut from Montgomery in 1841), came to his death on Monday evening last by falling off a wagon. While crossing a small branch Parham fell from the wagon and the wheels of the wagon passed over him, killing him. Parham was about 70 years old. 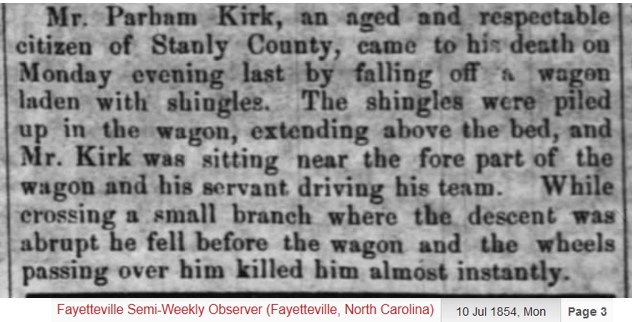 There are two estate files for Parham Kirk. Both are located on Ancestry and Family Search. The first, dated 1855, Stanly County, contains 88 pages. The second, dated 1856, Montgomery County, contains 11 pages. The first pages of both files contain the normal records (called writs) showing an attempt to collect debt from the estate or debt owed to the estate. The file dated 1855 contains a court record covering a land dispute between George, William and Thomas Crowell and Marvel Kirk, the Executor of Parham Kirk Dec’d. Neither of the records show the relationship between Marvel Kirk and Parham Kirk. Neither of the records contain the will of Parham Kirk.

On Family Search is found the book ‘Some descendants of John Kirk, 1745-1818 of Montgomery County, North Carolina’ compiled by S. K. Wheeler of Kings Mountain, North Carolina documenting the work of David Kirk Shaver. The book contains information on how to figure out the relationships (see below) but does not provide enough documentation on how the researcher discovered said relationships. However, it is listed that Parham Kirk had written a will in 1846 and in said will is noted specifically that Parham Kirk Jr had left the country (probably meaning county or state?) and should he not return within four years, then Marvel will inherit his portion of Parham’s estate. Thus, it can be reasonably assumed that Marvel is also the son of Parham. The only children listed as Parham’s are Marvel, Davidson and Parham Jr. 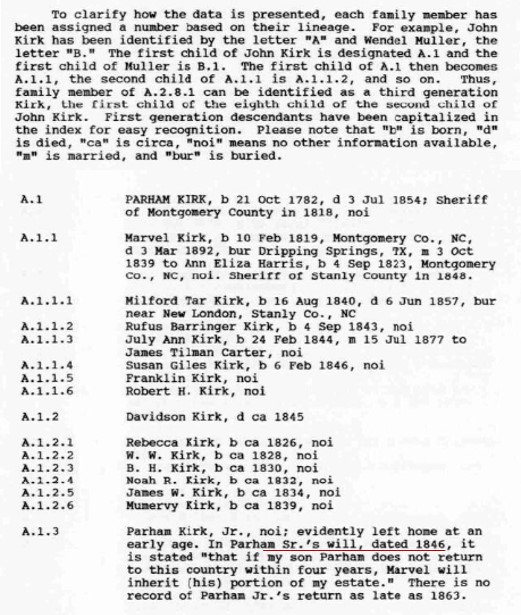 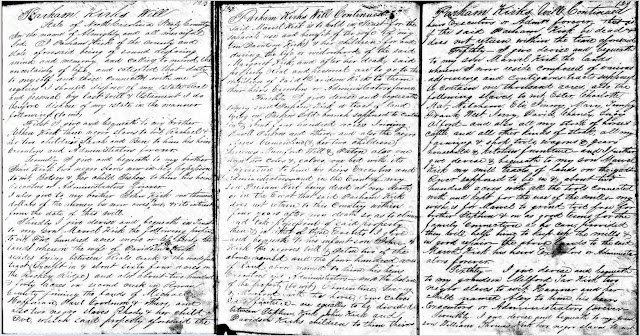 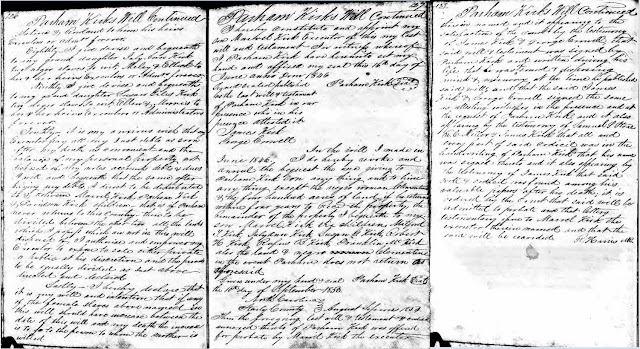 Parham Kirk, even before receiving his inheritance of land in his father’s estate division in 1819, had already begun to acquire land on his own. Parham would buy several tracts of land over a period between 1818 and 1850.

In Mar 1818, 75 acres of land in Montgomery County on the south west side of the Yadkin River beginning at his own corner about 50 yards south east of Ryals Creek and runs with James Crowell's line south to his own line of his Kimball tract then to his Parker tract. Chain carriers Caleb Goodman and John Daywalt.
In Nov 1818, 500 acres of land in Montgomery County on both sides of Parker's Spring Branch joining Richard Parker, Munley and Bonner's line and his own line. Chain carriers William Crowell and Drury Parker.

In Jan 1819, 100 acres of land in Montgomery County west of the Yadkin River, on the bank of the river, runs with Stokes's line then with Moses Crowell's line. Chain carriers George Crowell and Moses Crowell.

In Aug 1824, Parham entered 30 acres of land in Montgomery County on the south west side of the Yadkin River beginning Adam Pence's corner, runs with Caleb Goodman's line to his own line. This tract of land was surveyed on 4 Aug 1825 by Lockey Simmons. Chain carriers were Daniel Hall and George Grimsley.

Oct 1830, 64 acres of land in Montgomery County on the south west side of the Yadkin River beginning at a Cherry tree in his old line and joining Stephen Kirk's line then with Beards line to Moses Crowell's line to a 200 acres tract owned by Moses Crowell and David Kimball. Chain carriers David Roper and Moses Crowell.

Nov 1830, Parham had a 40-acre tract of land surveyed in Montgomery County on the south west side of the Yadkin River on the waters of Lick Creek beginning where his and David Kendall's line intersects to Moses Crowell's line to Kirk's Jackson Kimball tract. Chain carriers Stephen Kirk and George Crowell.

Dec 1835, 63 acres of land in Montgomery County south west side Yadkin River adjoining Moses Crowell and others beginning at Moses Crowell's corner and runs with his River tract then with Beards line. Chain carriers Marvel Kirk and Aaron Crowell.

Jan 1830 surveyed 7 acres of land in Montgomery County on the Yadkin River beginning at Daniel Kirk's and John Ru? corner on the bank of the river and at the mouth of Lick Creek and runs with Ru? line, formerly Moses Crowell's. Chain carriers J.A.H Parker and John Miller.

Dec 1843 surveyed 16 acres of vacant land in Stanly County (formed from Montgomery in 1841) on both sides of Lick Creek and south west side of Yadkin River adjoining his own line and James A. H. Parker's and others beginning at the mouth of said creek at Daniel Kirk's corner and Parham Kirk's 7 acre survey and joins Paul Barringer's line. Chain carriers Stephen Kirk and James A. H. Parker.
Nov 1850 surveyed 15 acres of land in Stanly County adjoining Wilee Earnhardt, George Crowell Sr and the lands of the heirs of William Hix dec'd on the waters of Curl Tail Creek and crossing the Fayetteville Road to a line of a 300-hundred-acre tract granted to John Kirk. Chain carriers George Crowell and William Stone.