The third person mentioned in the division of land in the John Kirk Dec’d estate file is Polly Moss.

At her father, John Kirk’s, death, Polly inherited 187 acres of land on both sides of Ryals Creek that adjoined her brother’s Parham (Lot No 5) and Lewis (Lot No 7). 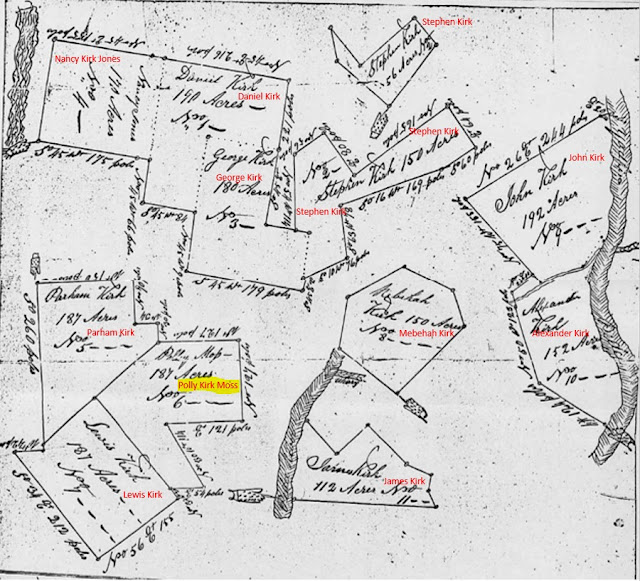 Polly Kirk was born about 1793 in Montgomery County, North Carolina, in those parts that later became Stanly County. She shows up on the 1800 Census for Montgomery County in the home of her father, John Kirk. She has 9 siblings, 4 brothers under the age of 10, 1 brother between the ages of 10-15, 2 brothers ages 16-25, a sister under the age of 10, 2 sisters between the ages of 10-15. 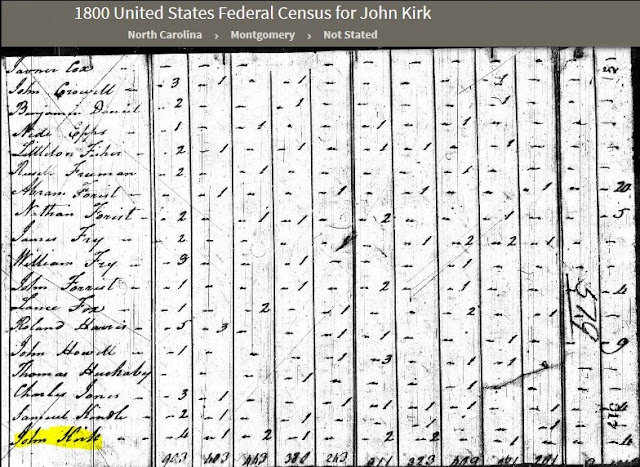 In 1810, John Kirk is listed with 4 daughters living in his home. Polly is most likely one of the 2 daughters listed between the ages of 16-25.

On 14 Nov 1834, Dr. Francis Kron noted in his journal that he had a visit from his immediate neighbor, Mrs. Paulina Moss, who was a living widow, being separated from her maniacal husband. I am not sure if this indicates that her husband is still living, but Polly is, indeed, separated from him either by choice or by death. Dr. Kron notes that Polly lives with her brother, James Kirk, who is about 36 years of age and not married. Dr. Kron also notes that Polly is a virtuous, active, amiable woman with much prudence. 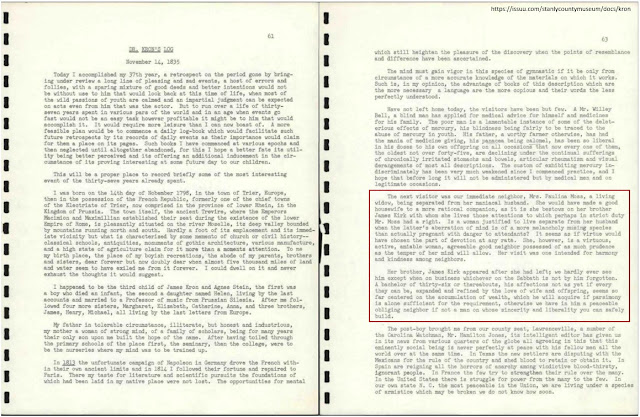 Back tracking to the 1830 Census, Polly Moss and her son can be found living with her brother, James Kirk. So, she has been a widow or separated from her husband since at least 1830. 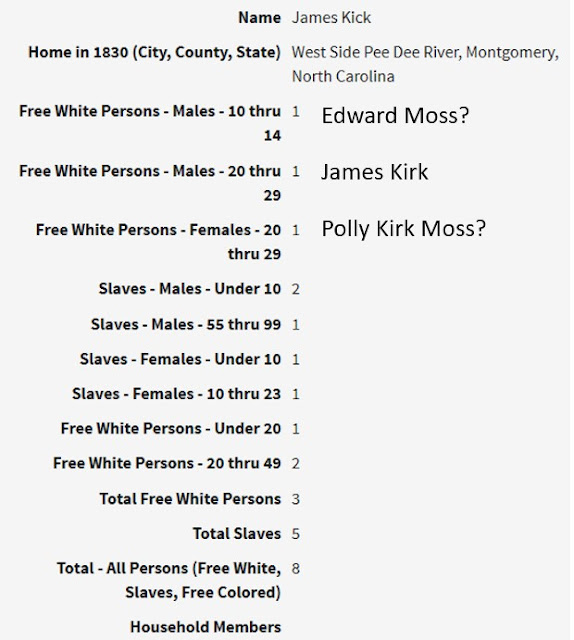 Dr. Francis Kron lived in what is current day Morrow Mountain State Park in Stanly County, North Carolina. Historical records tell us that this area was not, in what most think, the backwoods. I would venture to say that the area is more backwoods in current times than it was in the 1830s. On the contrary, Dr. Kron lived in a prosperous area, on a (then) main road and had many neighbors, among them, Fesperman, Moss, and Kirk, whom like himself were considered hardworking and prosperous families. 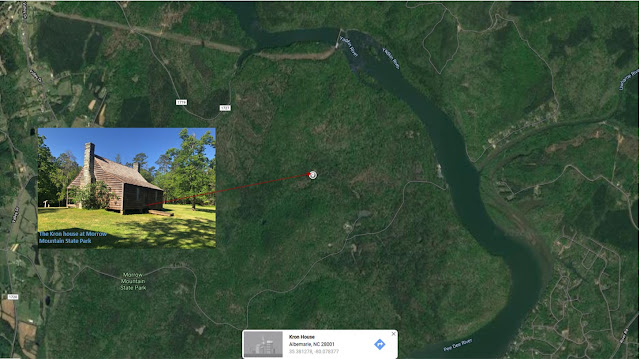 On the first day of Dec 1835, Polly sells to Conrad Miller of Rowan County, 23-acres of land that she inherited from her father, John Kirk, when he died in 1818. The deed states that this land was originally part of a 100-acre survey granted to James Morey and the survey showed it began at a stake on the west side and at the old Ford of said (Ryals) creek. 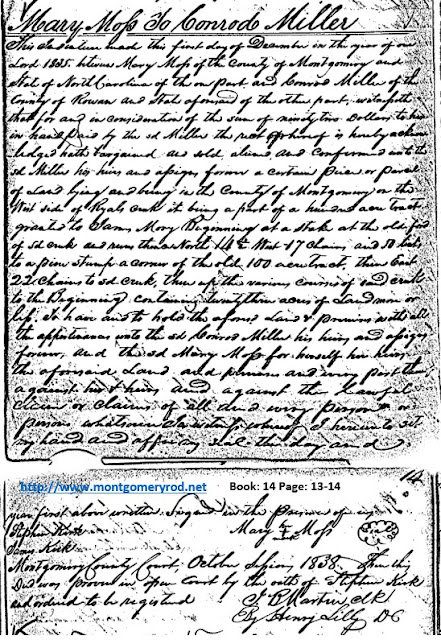 James Morey has two grants but only one shows issued, No 5382. That survey, done in July 1801, is for 100-acres of land on Ryals creek joining the widow Weeks, Fisher and Kirk’s land on the Salisbury road. The chain carriers were David Stillwell and Russell Freeman. At some point between 1804 and 1818, John Kirk perhaps purchased all, or at least part of, this land from James Morey. I found what might be a possible James Morey on the 1790 and 1800 Census of Montgomery County, but he seems to disappear after that. Since deed records for Montgomery were mostly destroyed, I am not able to confirm that John Kirk purchased this land from James Morey or from some other person that James Morey may have sold it to. 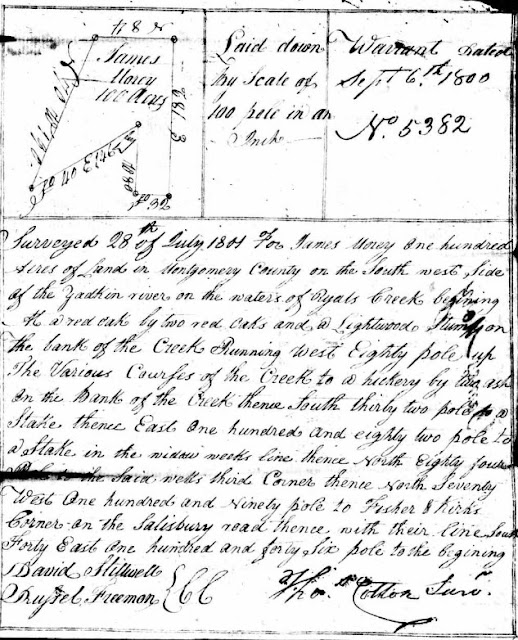 Conrad Miller, whom Polly Moss sold the land to, is the son of Jacob Miller, a man of German descent who hales back to LT Johann Wendel Miller who arrived in Pennsylvania in the 1730s. In 1753, a Land Grant is issued to Wendel Miller in Rowan County, North Carolina. He is one of the earliest settlers in Rowan County, and at the age of 22 takes a Native American to live as his common-law wife. She was called "Indian Lady" and given the Christian name Elizabeth (courtesy of Find-A-Grave).

Conrad Miller married Susana Lentz, the daughter of Johann Dewalt “David” Lentz, who is also of German descent, born in Berks County, Pennsylvania and made his way to Rowan County with the tens of thousands of German and Scotch-Irish immigrants who entered the colony from the north along the Great Wagon Road and settled in the western Piedmont of North Carolina. The Moravian settlements of Bethabara, Bethania, and Salem, as well as the cities of Salisbury (Rowan County) and Charlotte (Mecklenburg County), owe their creation and expansion to the Great Wagon Road (https://www.ncpedia.org/great-wagon-road). 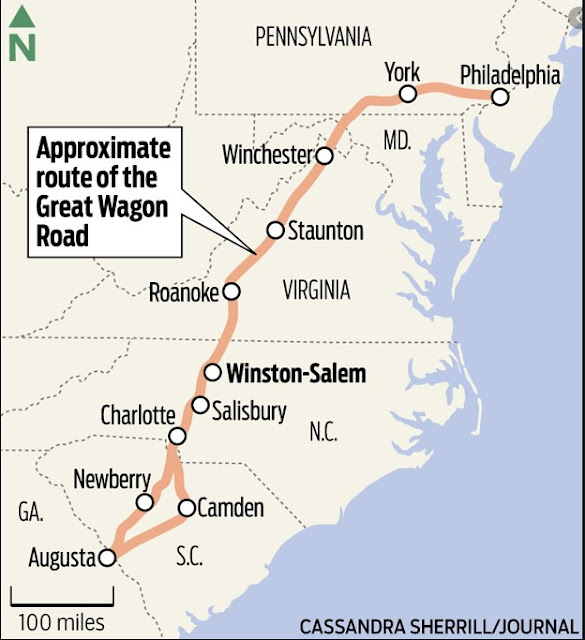 After 1835 things get a bit tricky in the research of Polly Kirk Moss. I feel certain that she had at least one child, a son, and they are most likely the same as listed in the household of James Kirk in 1830. Most research suggests that Edward Moss, married Christina Barringer, is the son of Thomas and Polly Kirk Moss. My research has not found any documented evidence to this theory. I have not found any to disprove it either.

There is some research done by David Kirk Shaver Sr found on Ancestry and attached to many family trees that seems to indicate that enough research has been done on this family to at least conclude that Edward Moss is the son of Thomas and Polly Kirk Moss. 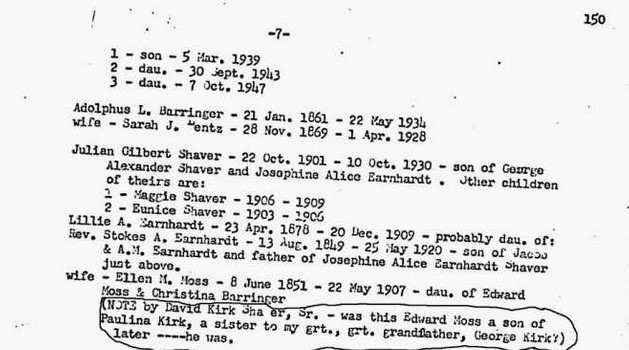 If anyone out there does have documented proof that Edward Moss is the son of Polly Kirk Moss, please reach out to me through this Blog.
Posted by Uwharrie Roots at 7:20 PM