Argulus Hercules Henderson was born before 1734. The earliest record I can find on Argulus is a 1755 North Carolina Taxpayers record for Orange County, North Carolina. He had to be at least 21 years old (or older) in 1755 to make the Census. Orange County was formed in 1752 from Johnston, Bladen, and Granville Counties, just three years prior to Argulus living there. 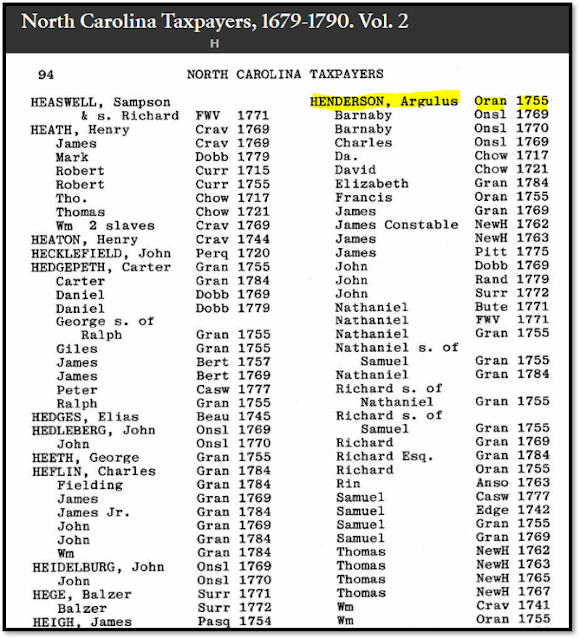 Argulus wasted no time in becoming a landowner. On July 15, 1760, he was issued a Granville Grant for 320 acres in Orange County, North Carolina, beginning at a Sycamore, a Water Oak, and Sweet Gum by Haw River then running south cross Little Creek 70 chains to a Hickory then east cross a bend of Little Creek 618 chains to a White Oak by Haw River then up the various courses of Haw River to the first station. This land was located in those parts that would become Chatham County in 1771.

Orange County Court minutes from Aug 1760 Ordered that the following persons be appointed a Jury to lay out a Road beginning near Robert Patterson's Plantation, thence to Colling's Ford on Haw River, thence to Hog's Ford on Deep River, thence down Cape Fare (Fear) to the County line: 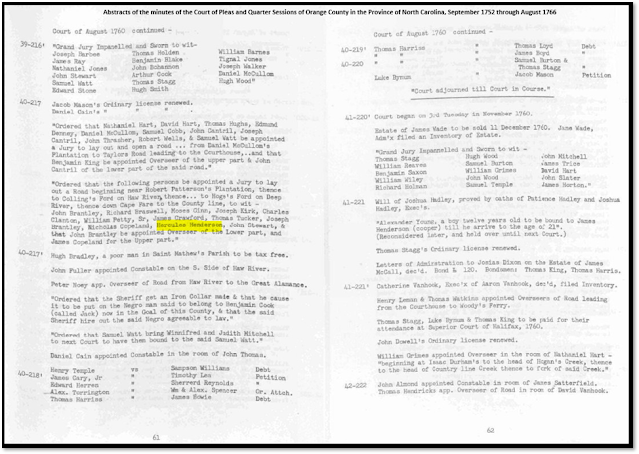 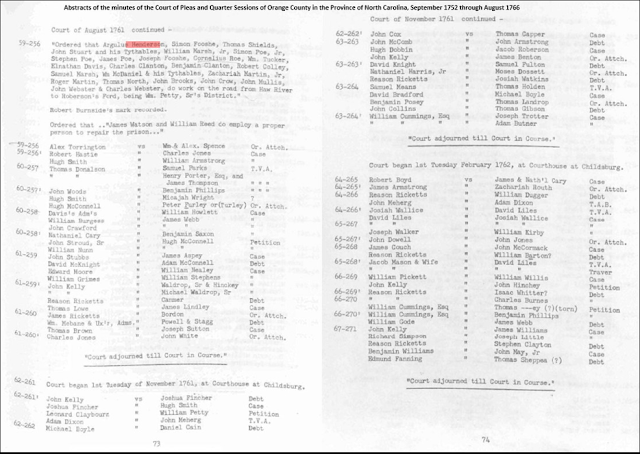 A circa 1777 map of Chatham County showing the area of Orange (now Chatham) County. 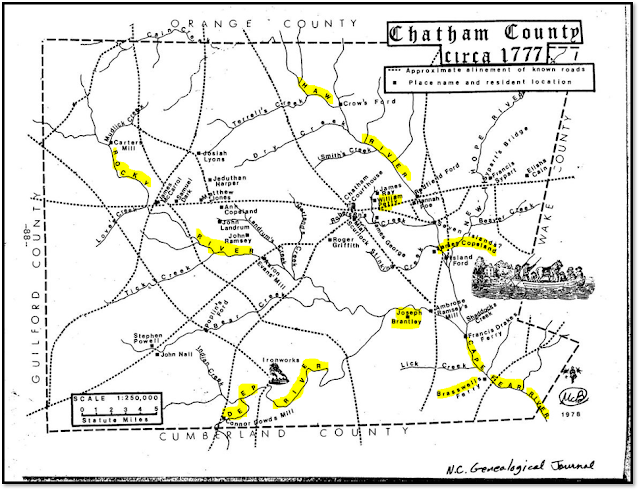 When protests failed to offer any relief from the high taxes, fees and confiscation of property, and colonists saw their taxes being used to build an elaborate home and office complex in New Bern for government officials, the Regulator’s resorted to violence, taking some officials hostage or destroying personal and public property. The Regulator movement culminated at the Battle of Alamance in May of 1771, where many were wounded or killed in battle, and others later hanged by then North Carolina governor William Tryon.

It is not known if Argulus Henderson was among the Regulators who fought at the Battle of Alamance. 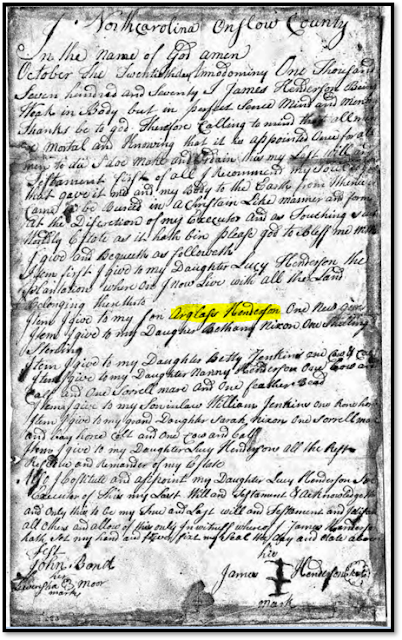 6 May 1779 Argulus entered Grant number 607 for 300 acres of land on Brooks Creek in Chatham County, North Carolina joining John Stewart and Hackney (probably Joseph Hackney) and includes the improvement James Henderson lives on. He was issued the land on 9 Oct 1783. 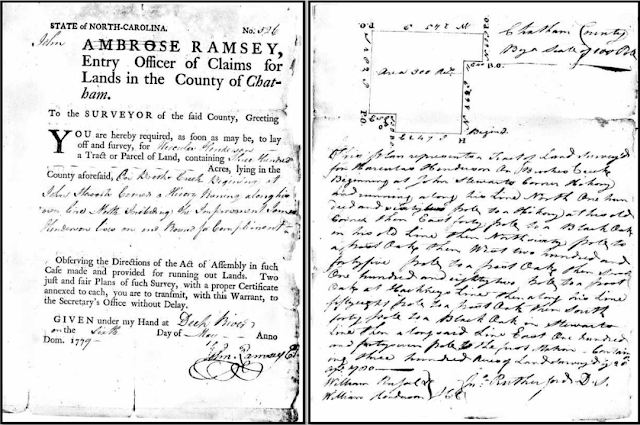 It appears that Argulus either fought in or provided support for the Revolutionary War as on 20 Aug 1783, he received a payment of 31 pounds 1 shilling and 8 pence for his claim submitted in the Hillsborough office. 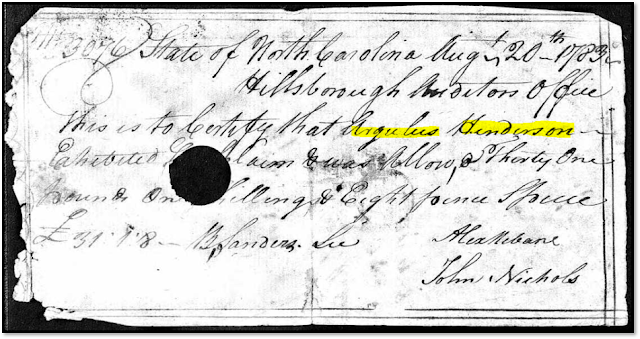 In Oct 1783 Argulus entered a grant for 250 acres beginning at a black oak the south side of the improvement where Ignatius West formerly lived and including the improvement. 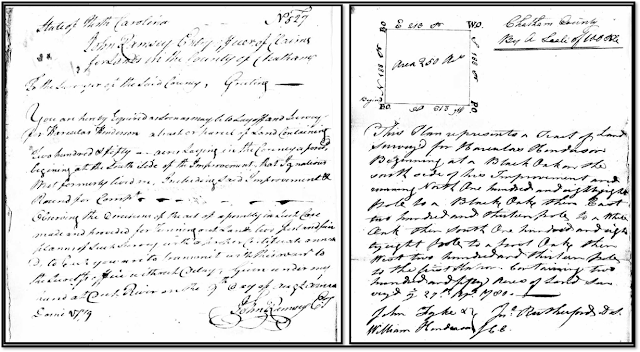 In Aug 1784, less than a year later, Argulus sold to James Williams the same tract of land situate lying and being in the county of Chatham beginning at a back oak in the south side of his improvement 250 acres. 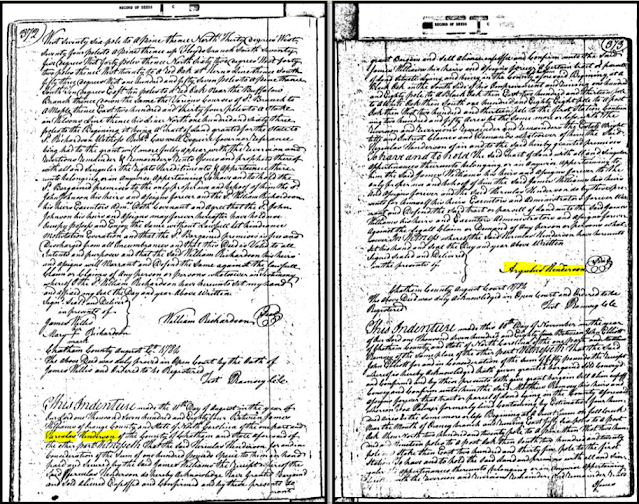 I am not able to find Argulus Hercules Henderson on the 1790 Census. He does appear on the 1800 Census for Chatham County, Hillsborough District, North Carolina with the following people in his home: 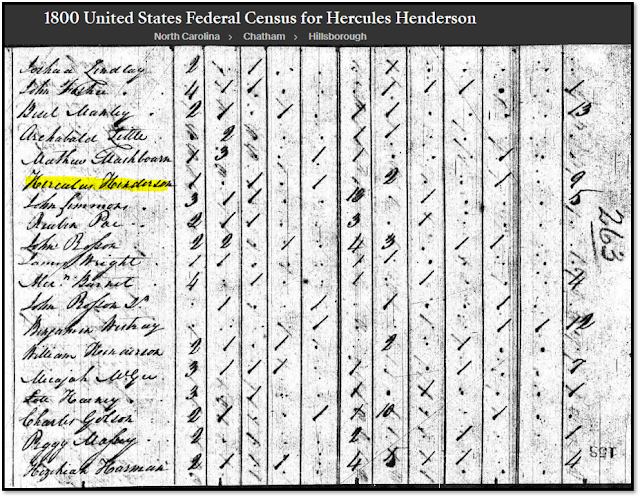 Argulus wrote his will (shown below) on 6 Sep 1804 in Chatham County, North Carolina naming the following heirs:

In Nov 1804, Argulus deeds to his son John, the house and plantation where on he now lives, on the east side of the meadow branch lying and being situate on the north side of Brooke’s Creek, 150 acres, joining Nicholas Prince. Argulus reserves lifetime rights to the land. 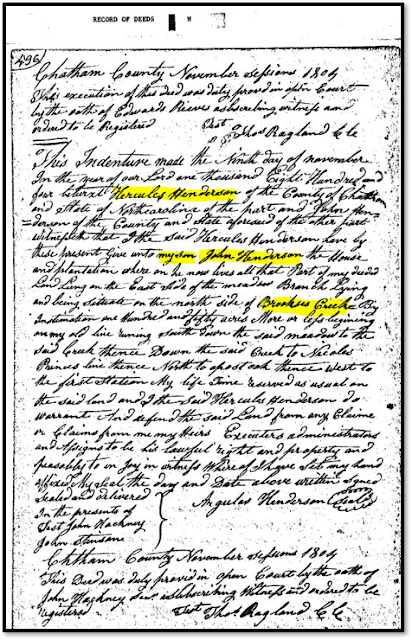 Argulus died before August 1806 as his will was proved in the August Session of court in 1806 by the oath of William Brewer. 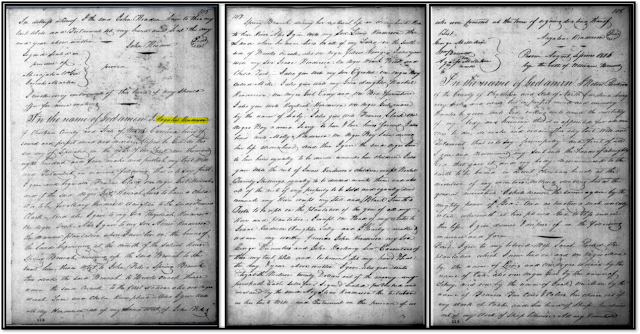 Posted by Uwharrie Roots at 6:33 PM