Finding What You Didn't Know Was Lost

Have you ever lost anything before? I have! I once lost my wedding ring and spent the whole day looking for it only to find it right where I forgot I had left it. I have been lost in a different country, which is scary. I have never found anything I did not realize I had lost until a few weeks ago when I was browsing around my Ancestry tree looking at my Marks relatives. I came across Jarvis and Ida Mitchell Marks and began looking at the empty space beside their son, Curtis Marks. My family had told me that Curtis had never married and he had no children, so, I had never really tried to find out anything about him. As such, his space on the tree just sat there empty and I did not know much about him. I am going to use this Blog to tell what I uncovered about Curtis – and it is something big!

First, though, let me remind everyone that the reason I started the Blog, Uwharrie Roots, is to explore ideas and research my third great grandfather, William Buck Marks. Having determined that there was not much recorded evidence of William Marks existence, I decided to start a Blog about all the people who lived around him in hopes of discovering anything about him. The Blog has worked thus far and I have uncovered a lot that I did not know before. With that said, we will jump right into learning about Curtis Marks and how, through him, I found exactly what I was looking for in the person I never knew existed.

Curtis Thomas Marks was born to Thomas Jarvis and Ida J. Mitchell Marks on 16 Dec 1908 in Montgomery County, NC. He was the fifth of eight children. I do not know why but Curtis did not make the 1910 Census, which, at first, led me to believe that he was probably not born in 1908 but maybe in 1910, after that Census had been enumerated. The 1910 Census shows Jarvis (35), Ida (30), Mary (8), Buddy James (Johnie) (6), and Ida (3). I checked the Stanly County 1910 Census for Tom and Barbara Lefler Marks, the parents of Jarvis, just to see if baby Curtis was visiting with the grandparents the day of the Census, but he was not there. I am not able to find Ida’s parents, John W and Lillie Frances Mitchell on the 1910 Census. It is possible that baby Curtis could have been visiting with his maternal grandparents. 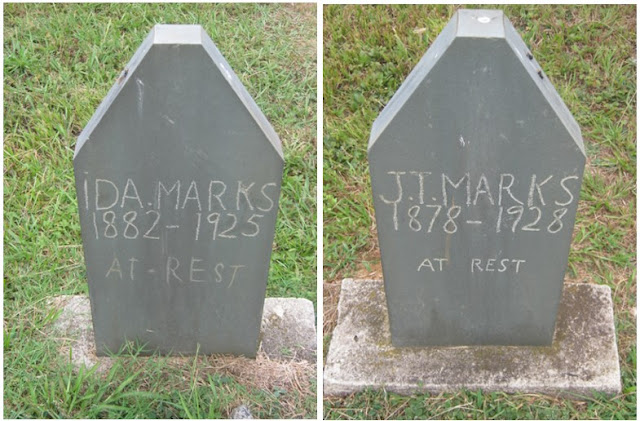 By 1930, Curtis, now 22, is living as a boarder with his sister, Mary and brother-in-law Clarence Cecil. You can see that Curtis’ grandparents, Tom and Barbara Lefler Marks, live next door. Bettie L, Clarence’s mother lives in this household, as well as L.T. (Tebe Marks), the brother of Mary and Curtis.

Up until this point of my search, I am finding everything to be exactly as the family had always believed. That Curtis lived with his sister or other family members into adulthood and never married. It is when I was not able to find Curtis on the 1940 Census that I began to search for military records thinking that perhaps Curtis served in WWII. I did find Curtis’ draft card and on it, he lists his wife, Mary Elizabeth (Cox) Marks. Curtis and Mary are living in Rockingham, NC. It is 1939, Curtis, now 31 years of age, has a wife. 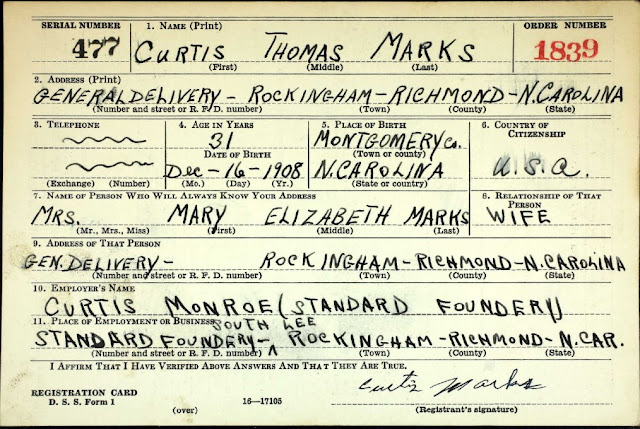 Super excited, I begin to look for children and I did find them. Due to privacy concerns, I will not go further in this blog. I can tell you that I am in touch with the descendants of Curtis Thomas Marks, my third cousins, and we are arranging to meet in person very soon. One descendant has agreed to take a Y-DNA test so that we can learn the paternal Marks line of our third great grandfather, William Buck Marks!

Curtis Thomas Marks died on 12 Mar 1992 and I am very happy to report that his marital status has changed from ‘Never Married (Single)’ to ‘Married.’ 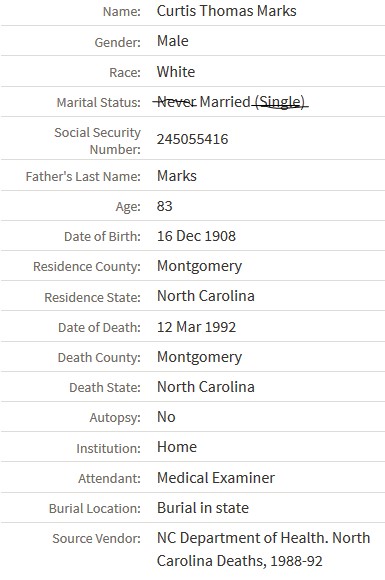