Richmond County, NC formed from Anson County in 1779 and named for Charles Lennox, third Duke of Richmond and Lennox who was an Englishman and a member of the Parliament of the United Kingdom who sided with the colonists in America during the American Revolution. Kader Keaton, a colonial American officer in the American Revolutionary War, was a founder of Anglo-American settlement in Richmond County. Known for its railway history in the southeastern sector of Richmond County is the city of Hamlet. Prior to the turn of the 20th century, the Seaboard Air Line Railroad moved to Hamlet, helping the town become a crossroads for rail spurs extending from Florida to New York and all points east and west. In 1900, the SAL Railroad constructed the Hamlet Historical Depot Seaboard Air Line Passenger Depot, a Victorian architecture train station that is one of the most photographed train stations in the eastern United States. The depot added to the National Register of Historic Places in 1971 and fully restored in 2004. In 2009, the city of Hamlet dedicated a new building to the Tornado steam engine locomotive—the first one in the State of North Carolina. D.J. Burr & Associates of Richmond, Virginia built the original locomotive in 1839. Federal forces briefly captured it during the American Civil War before repatriation. In 1892, Raleigh, NC featured the Tornado in its Great Centennial Celebration. Hamlet is also home to the National Railroad Museum and Hall of Fame, a striking collection of artifacts from the Seaboard Air Line Railroad spanning decades of time. (Wikipedia) 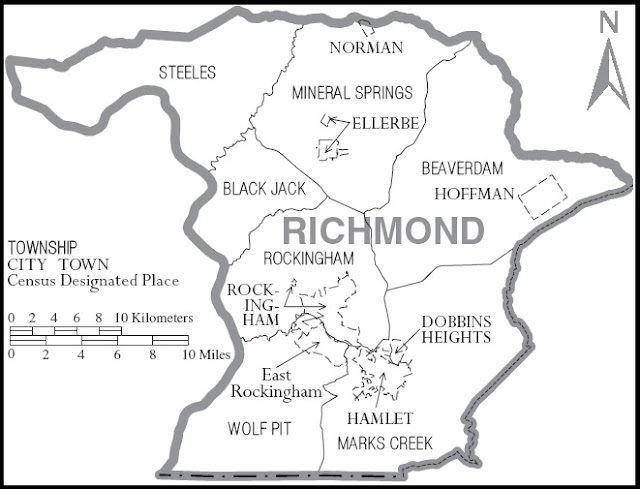 The Marks of Richmond County, NC began with Elias Marks from Stanly County. Read more about Elias Marks in my Blog, The Marks of Stanly County, North Carolina. The available documentation tells the story that Henry Marshall Marks, second oldest son of Elias Marks and Judith Allen, was born 8 Apr 1848 in Stanly County, NC. On the 1850 Census for Stanly County, NC, Henry, noted as being two years old, has two older sisters, Mary (14) and Sarah (10) and one older brother, James (11). Henry’s father, Elias, is 42 and his mother, Judith, is 37. Elias’ listed job is a laborer and the three older children are in school.

Henry Marks would be 23 years old in 1870. I know he has left the area, as I am not able to find him on the Census record for Stanly County. Thinking he might have moved across the river to Montgomery County, I searched for him there but was not able to find him. I searched for him in Anson, Rowan, Davidson, Union, Richmond and Cabarrus counties but to no avail. It took me quite some time to figure it all out, and it was not until I began researching the children that I discovered Henry must have married and moved to Mississippi as at least one of the children’s death certificates state she was born in Mississippi. However, as is the Marks’ theme, he magically reappears in Stanly County in 1880 with his wife and six children. I continue to search for this Marks family in Census records in Mississippi. I will update this Blog if and when I find them.

It is in Richmond County that I found a marriage license, dated 19 Oct 1887, for Henry Marshall Marks and Mary E Thrower. Mary, born 1 Jul 1840, is the daughter of John Thrower and Sophronia C Jenkins. 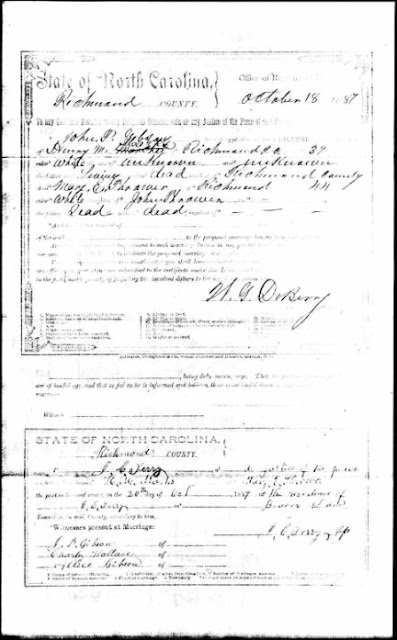 The 1900 Census for Beaver Dam, Richmond County shows the other children that Henry Marshall and Anne Calloway Marks had between the Census years. Benjamin F was born in Sep 1881 and Mary E was born in Jul 1883.

The year 1910 shows the family still in Beaver Dam, Richmond County. The older children have married and left home. Ben and Mary, the two youngest children, remain at home with their father and stepmother.

Henry Marshall Marks died on 28 Sep 1919 while driving his car from Ledbetter to Hoffman. 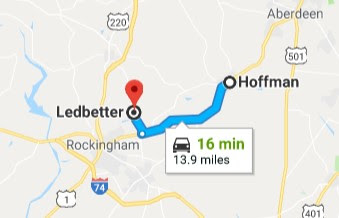 His death certificate only states that he died suddenly after having a severe attack of the head. 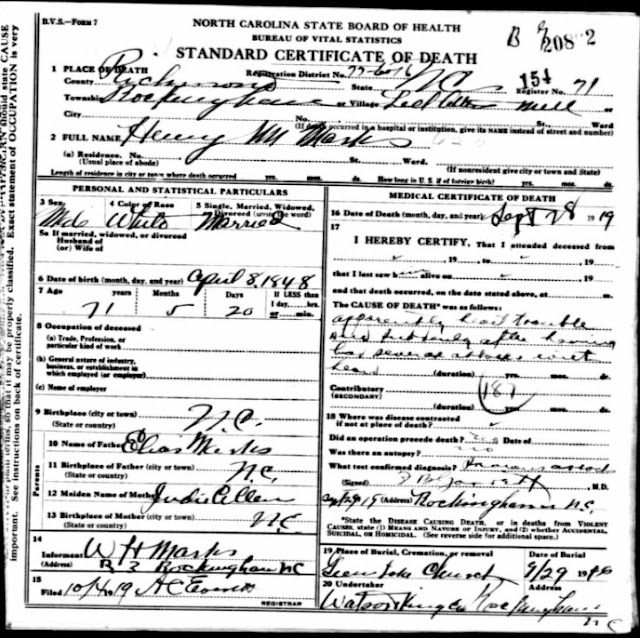 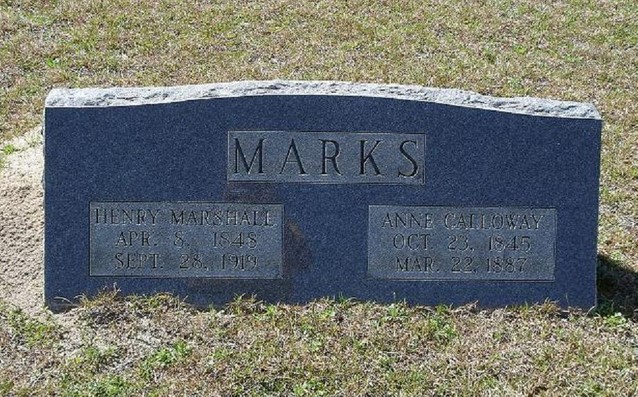 I found a Newspaper clipping from the Rockingham Post-Dispatch dated 23 Oct 1919 written by ‘A Friend’ who had many nice things to say about Henry Marshall Marks. 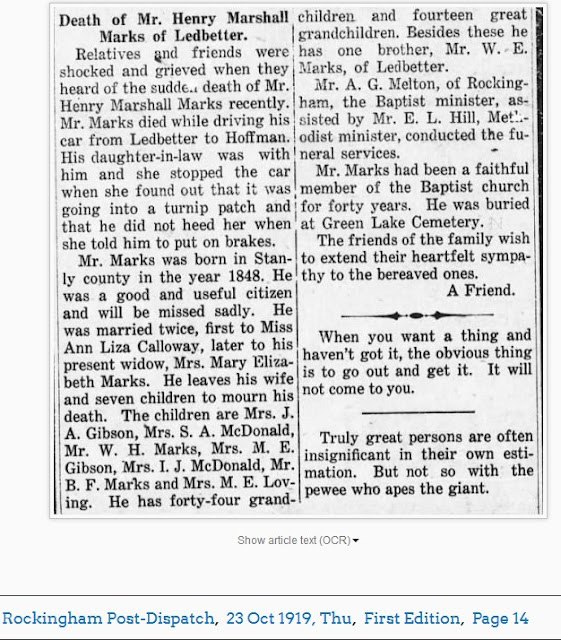 Mary E Thrower Marks lived with her stepson, William Marks, until her death on 26 Jun 1921. Mary was buried in the John Thrower Cemetery in Beaver Dam, Richmond County, NC alongside her parents, John and Sophronia Jenkins Thrower.

On 2 Jul 1921, Henry’s son, William H Marks, entered Probate court requesting Letters of Administration on the estate of Henry Marks. All of the children, with the exception of Julian, who died in 1891, are listed as entitled heirs of the estate. 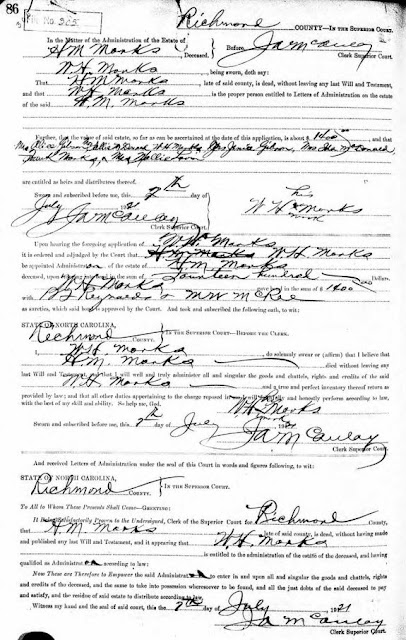