I am a history buff. I cannot help it. I love learning about people, places and the events of the day in the times in which they lived. I love to hear stories of how people lived and what was important to them in the era that they lived in. I am a fan of old graveyards, maps, newspapers, museums and storytelling. I have been reading a lot about the history of North Carolina of late, in particular the area of Stanly and Montgomery Counties and the adjacent counties to learn about the places and the people who populated these areas. I figured out early on that knowing the history of a place is vital if you want to know about the people who lived there. Where did these people come from? What means of travel did they use? Who were the families they joined when entering a town or left behind when going west or south as new land became available? Whom did they marry or divorce? Where did they go to school and church? Where did they bury their dead? What hardships did they face? What jobs did they work to make their livings? On and on the questions go. Sometimes, you learn about an ancestor who was a risk taker and find out fascinating things that they did. Other times, you learn that perhaps you could have lived without knowing your ancestor was not on the good side of the law; and of course, there is always that illusive ancestor who you know existed but can’t seem to find a paper trail to prove their existence if your life depended on it! Thus is my third great grandfather, William ‘Buck’ Marks. He is the very reason I began this Blog, to explore everything I can about everyone who lived around him in hopes of finding him somewhere in the documents of history.

Large-scale European settlement of the region known as Stanly County today, came in the mid-18th century via two primary waves: immigrants of German and Scots-Irish descent moved from Pennsylvania and New Jersey seeking enhanced religious and political tolerance, while immigrants of English backgrounds came from the region of Virginia and the Cape Fear River Basin in Eastern North Carolina. In early English colonial times, the Stanly County area was politically part of the New Hanover Precinct, out of which Bladen Precinct created in 1734. The renamed Bladen County subdivided to create Anson County in 1750, which in turn spawned Richmond and Montgomery Counties in 1779. (Wikipedia)

I came across Elias Marks in the Daniel Freeman store ledger for Lawrenceville while searching for my third great grandfather, William ‘Buck’ Marks. Lawrenceville was the seat of Montgomery County, North Carolina (including the land that is now Stanly County) from about 1817 to about 1842. The Cochran family owned the original town plat, dated July 2, 1817. By the mid-1840s, the county seat moved to Troy, where it remains. The estimated population of Lawrenceville was about 500, with a Post Office established in 1818. The town had two General Stores, one belonging to Daniel Freeman. LANDTRUST of Central North Carolina now owns the 112-acre historical site.

Be sure to read Job’s Children Blog to learn more about Lawrenceville. 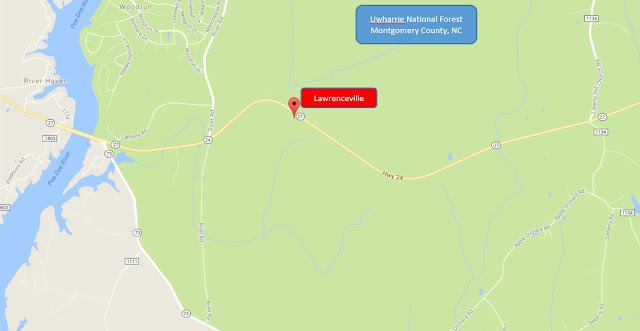 I found Elias Marks on page 45 in the Daniel Freeman store ledger for Lawrenceville making a purchase for a Ben (Marks). More on Ben to come in later Blogs. I do not know the relation between Elias and Ben but I know they knew each other personally, because they make purchases on behalf of one another. They also share the same surname, so it is logical to assume they are related.

You can read more about the ledger in my Blog Daniel Freeman’s Store Ledger.

It is possible that Elias Marks is a brother to my William Marks and that he was born in Chatham County, NC about 1808. I believe, but cannot prove, that John and Catharine (Caty) Gunter Marks are the parents of my third great grandfather, William, as well as Elias Marks (both John and Catharine are in the Daniel Freeman store ledger). John Marks had a land grant for 100 acres of land on Clarks Creek in Montgomery County, North Carolina as early as 1807. Clarks Creek runs through the west side of Lawrenceville. Also possible, is that Elias was born in Montgomery County about a year after the family moved from Chatham County to Lawrenceville. William, born about 1795, would have been about 12 years old at the time of the move. The problem with this theory is that I am not able to find a John Marks in Chatham or Montgomery Counties with family members of the right age group for the 1800 Census and there is no John Marks in Montgomery County on the 1810 and following Census years. Yet, John Marks did exist as he is making purchases at the Daniel Freeman store in 1833, 1834, and 1835. Caty Marks is on the 1830 Census for Montgomery County but not the 1800, 1810 or 1820 Census. Therefore, the question is, how can a family own 100 acres of land for more than 25 years and be shown making purchases at the local General Store but not show up on the Census records? It is frustrating! More on John and Caty Marks in later Blogs as I discover new information. 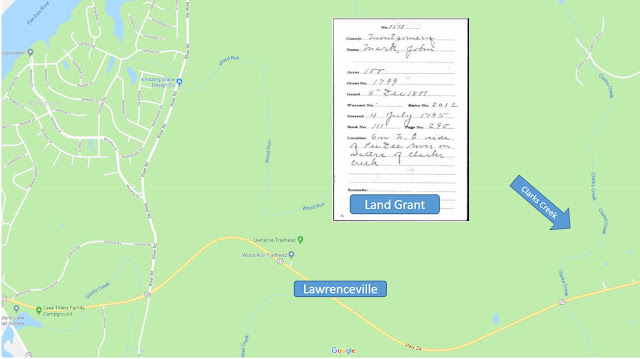 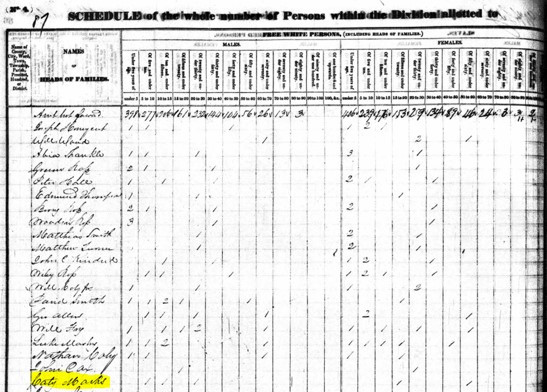 I found the Elias Marks family on the 1840 Census in West Pee Dee, Montgomery County, North Carolina. This area would eventually become Stanly County. Elias married Judith Allen, most likely about 1837/8. Because the Montgomery County courthouse burned down several times, and records destroyed, there is no marriage record that I can find so, I am guessing on dates. Elias and Judith have three children, Mary Jane, born 1836, James, born 1839, and Sarah, born 1840. About this time in history, Montgomery County included the land east and west of the Pee Dee River. The citizens on the west side of the Pee Dee River had to travel to the courthouse in Lawrenceville by crossing the river on a raft or ferry. It became difficult and dangerous and the citizens demanded a new county established, with its own courthouse, on the west side of the Pee Dee River. 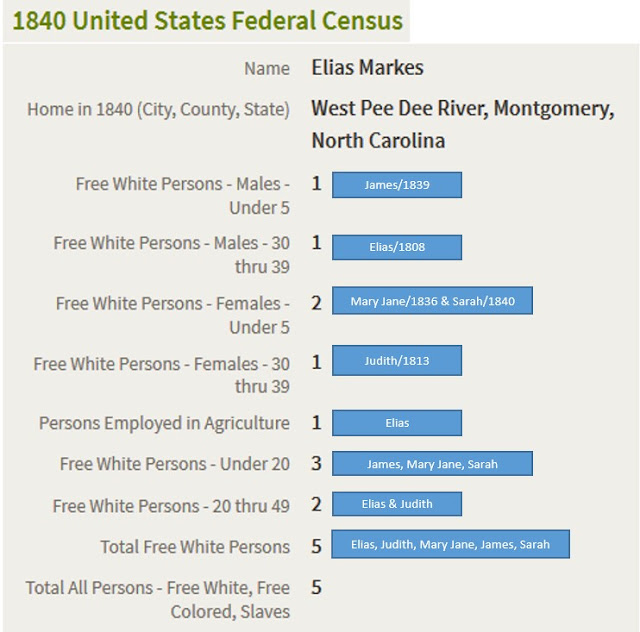 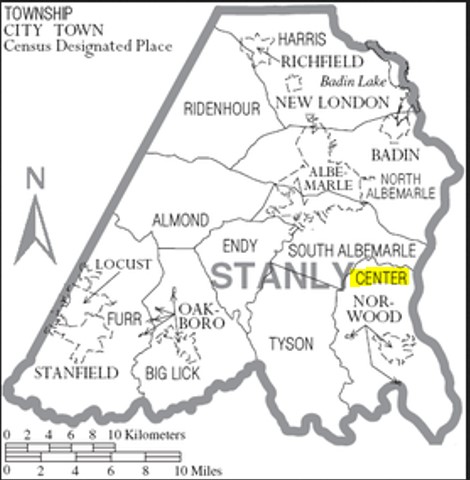 In 1850, Elias and his family lived in Center Township, directly on the Pee Dee River, in the new county of Stanly. The Pee Dee River became the dividing line for the two counties. Elias and Judith now have four children in their home, Mary Jane (14), James (11), Sarah (10), and Henry (2). 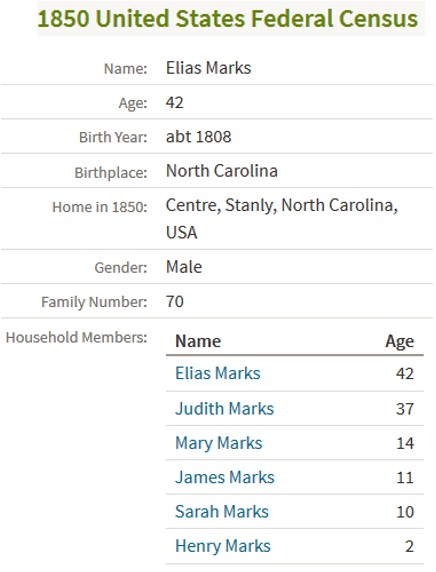 The 1860 Census finds the Elias Marks family in Stanly County. Elias now 53 and his wife, Judith, 41. Mary Jane and Sarah Marks are no longer living with their parents, yet I am not able to find marriage or death records for them. Mary Jane does show up later as M.J. Calloway, living with her parents on the 1870 Census. James (21) and Henry (13) and still at home. Two new names appear William E (9) and Judith A (6). 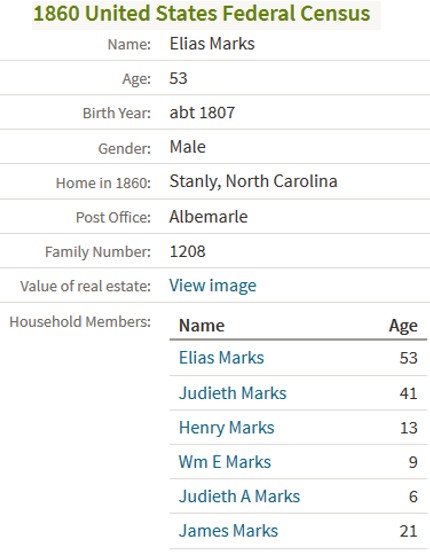 In 1870, Elias is now 62 and Judith, 58. William, 18 and Judith, 15 are still at home. James married Nancy Riggsbee in 1861, about a year after the 1860 Census. I have a few leads that Nancy Riggsbee may be from Chatham County, North Carolina. This would be of some interest as it might indicate a connection back to Chatham County, North Carolina, where, supposedly, my third great grandfather, William Marks, was born. Henry Marks is not on the 1870 Census but he is back in Albemarle, Stanly County by 1880, married to Ann Calloway, with six children. There are two new names in the Elias Marks house in 1870, Calloway Marks, 29, who is Mary Jane (see 1880 Census) and Judith F Marks, 9, her daughter. 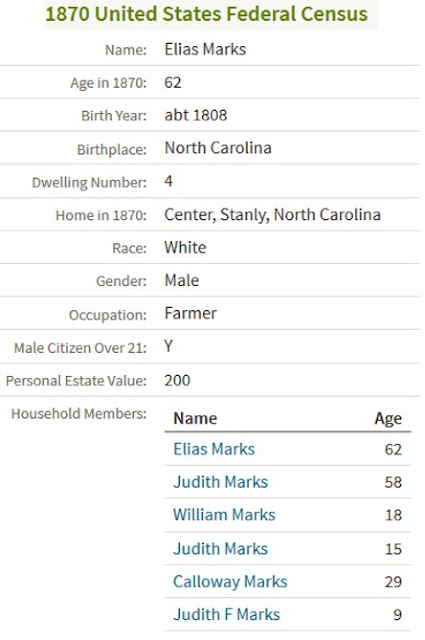 The year 1880 finds Elias (72) and his wife, Judith (real age is about 67), in Albemarle, Stanly County. His daughter, Mary Jane (M.J.) Marks Calloway and granddaughter, Judith F, are still living with him. To my knowledge, Mary Jane never remarried. I am still not able to locate a marriage or death record for her and I have not completed my research on her daughter, Judie. Judith Ann Marks married William Harrison Kirk and moved to Texas. She and her husband both died and are buried there. It is between 1870 and 1880 that Henry Marks makes a move to Rockingham, Richmond County, North Carolina with his wife, Ann, and their children. William Marks, Henry’s brother, will leave for Texas where he marries Nancy Martin. Eventually, William and his wife, Nancy, move from Texas to Rockingham, North Carolina, near his Marks family. Both he and Nancy are buried in Rockingham. 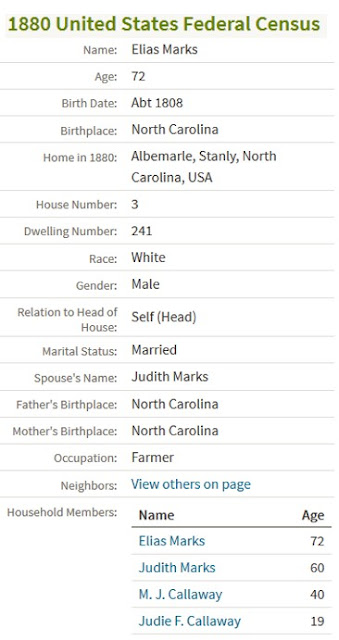 Elias Marks died about 1889 in Stanly County, North Carolina. His will, probated on 30 May 1889 with his son, William Edgar Marks, listed as Administrator. Elias’ wife, Judith, not mentioned in the probate records and I assume she died between the 1880 Census and 1889. I have not been able to find a grave for either Elias or Judith. 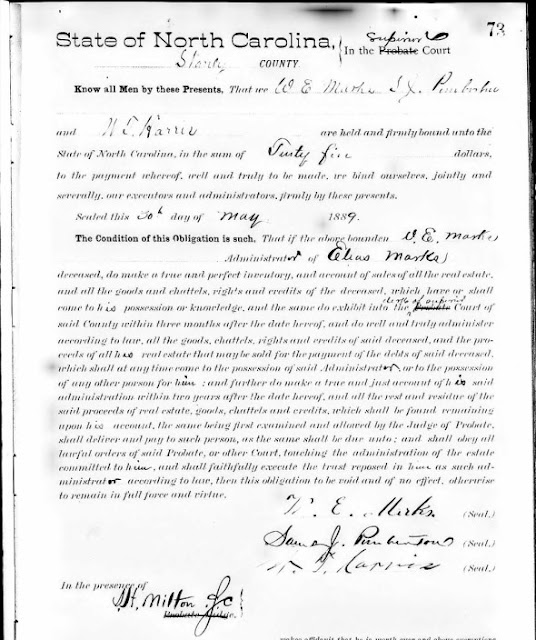