Family history and the death certificate of my second great grandfather, Tom Marks, says that my third great grandfather, William Buck Marks’, place of birth is Chatham County, NC. I have been working under that assumption and have been researching the Marks families of Chatham in an attempt to connect the Marks of Montgomery and Chatham together. I must admit, that I have not had much luck yet; I am not closed to the possibility that my William Marks is from somewhere altogether different and do, when time permits, explore other areas, but, my main focus right now is Chatham County. 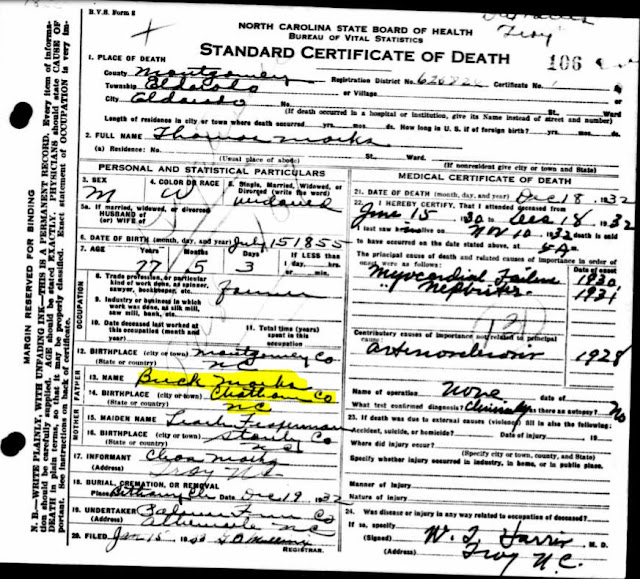 My first Marks find in Chatham County was that of William and Margaret Marks. While researching this family, I noticed Ancestry kept providing me the material in reverse order so, I learned about the death of William Marks before I learned about the life he had lived. A bit odd, but I went with it. William Marks died in 1842 in Chatham County, intestate (without a will). I first found his wife, Margaret, petitioning the Court of Pleas and Quarter Sessions in Chatham County for her dower. Her husband, William, now deceased, had left a considerable amount of real estate adjoining the land of Alfred Buchanan, James Womack and others consisting of 434 acres, another tract of land adjoining Thomas Ragland and John Partridge and others to contain 600 acres. Yet another tract of land adjoining John Bright and James Petty and others containing 150 acres. Margaret advised the court that her husband died leaving her a widow and the following surviving children: Richard, William, James, Nicholas, Sarah, the wife of William Farrell, Mary Eliza, the wife of John Harmon, Nancy, wife of Robert Sloan, and minor children, Margaret, Susan, and Lloyd.

The court ordered the Sherriff of Chatham County to summon a jury of good and lawful men of the county of Chatham to lay aside one third of the 1184 acres of land. The good and lawful men of Chatham County got around to it in Feb 1843 and finally in the May term of 1844, Margaret is given her dower of about 335 acres broken into two tracts of land. One tract of about 77 acres on the Cape Fear River and another containing about 258 acres and bordering the Raleigh Road, where the family currently resided, including the dwelling house and other out buildings.

Margaret’s oldest son, Richard Salter Marks, appointed Administrator, goes about selling the household items of William Marks, his deceased father. To my amazement at the laws in 1844, Margaret Marks must purchase the very items that she had free use of the day before. Her older sons bought household and farm items, I am sure, to give back to their mother so she can provide a living for herself and her minor children. It is interesting that the Widow Marks bought “one blind horse called Fox.” I wonder why she wanted the blind horse.

Thus far, I have been able to find only four land grants to Marks’ in Chatham County, none of them for a William Marks. The investigation continues on how William and Margaret Marks acquired the more than 1000 acres of land. I will update this Blog once I find out.

Since I lived on the coast of NC for some years, I had heard the name Salter before, so, my attention caught when I read that Richard’s middle name was Salter. I knew Salter was a Surname on the eastern NC coast and I began to wonder if Salter could be the Widow Marks maiden name and she had given her son her family name as his middle name. I began to do searches on the name Margaret Salter and found that other researchers had Margaret listed with a maiden name of Salter but I was not able to connect her with any of the Salter families I found. I think others must have had the same idea as me. Although I do believe that Salter is most likely Margaret’s maiden name, I am not able to prove it yet. Others are braver than I am and have linked her to the ancestry of the early Salter’s of Bladen County, NC. I did find a Land Grant for a William Marks in Bladen County, NC dated 1808 but I do believe that the William and Margaret Marks in this Blog were in Chatham County by then. There are 29 land grants for Salter’s in Bladen County that I have researched but still, I cannot definitively say that Margaret is a Salter. I have filed the land grant and the Salter information away with other ‘circumstantial evidence’ in hopes of one day tying up all these loose ends.

Update: Margaret Marks is the daughter of William Salter of Bladen County, NC 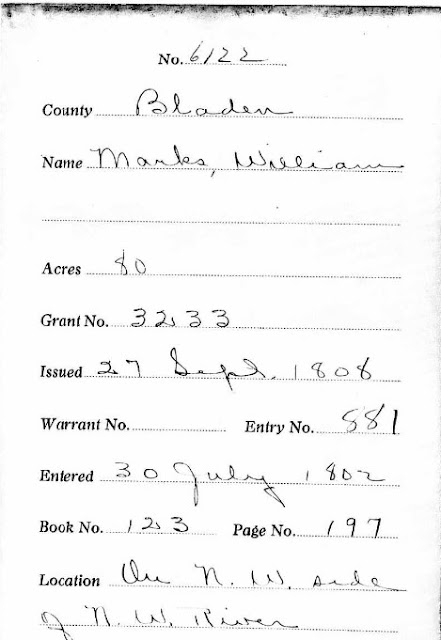 Both the Haw River and the Deep River dump into the Cape Fear River, which then flows through the counties of Cumberland, Harnett, Bladen and so on before it eventually dumps into the Atlantic Ocean near Wilmington. In Colonial days, the Cape Fear River was a means of transportation into the interior of North Carolina, and the Marks’ could have been one of the many Scots-Irish families who landed in Wilmington and made their way to what is now Chatham County and settled there. 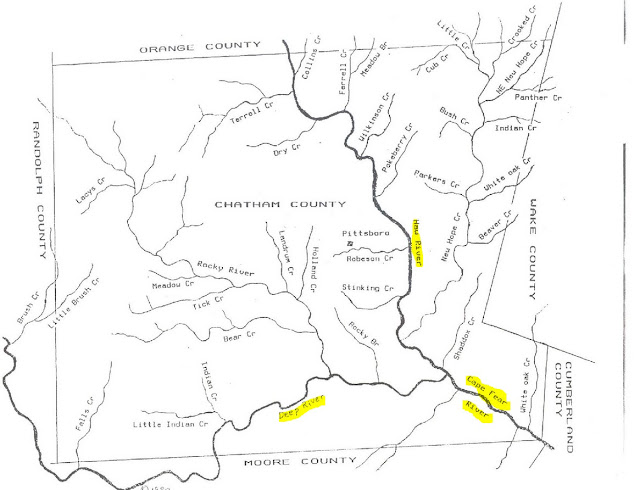 On November 11, 1844, Margaret Marks, awarded custody of her own child, Lloyd Marks, who is called a lunatic. By Feb 1848, William Marks, son of William and Margaret Marks, appointed guardian over Lloyd Marks as Margaret Marks died. I have great admiration for Margaret Marks. As I researched this woman, I could see that she knew how to take care of business and she learned not only from her own mistakes but from those of her husband too. I got the feeling, as I read through the court papers, that even though Richard, her son, may have been the Administrator on paper, Margaret was probably the one taking care of business behind the scene. Margaret did learn through the experience of her husband not having a will and ensured the support of her son, Lloyd, by writing a will before she died.

In Feb 1849, less than a year after his mother died, William Marks Jr is back in court to settle the estate of Lloyd Marks, his brother. In 1896, William Marks Jr dies, intestate, learning nothing from the experience of earlier years when his father died with no will.