Be sure to read I found your daddy, William Buck Marks

While researching my Marks family, I came across Daniel Freeman’s store ledger at the website Digital NC. It took me several weeks to go through the journal, as I wanted to capture every name and catalogue them so they would be easily available to me for future Blogs I want to write on other family members. I found several entries of purchases made by my third great-grandfather, William Marks, as well as two names I have suspected were my fourth great-grandparents, John and Catharine Marks. While I still do not have definitive proof of who the parents of William Marks are, I feel I am at least on the right track. It took me until page 383 of the ledger to find what I was looking for. Namely, that Marks is Catharine’s married name and not her maiden name. Mr. Daniel Freeman was kind enough to list her as Mrs. Catharine Marks on page 383.

It has long been the suspicion that the parents of William ‘Buck’ Marks are John and Catharine (Caty) Gunter Marks. Many posts on Ancestry.com as well as Blogs I have read over the years have indicated Marks and Gunter descendants alike believe that Caty Gunter, the daughter of Isham and Hester Pilkington Gunter from Chatham County, NC, married a man by the name of John or James Marks and moved away from Chatham. Isham Gunter’s will names two of his daughters as Caty Marks and Mary Marks, indicating that both girls married into the Marks family of Chatham County, NC. Below is a portion of Isham’s will, dated 28 Sep 1818, showing the girls were married prior to Sep 1818.

The recorded entries in the store ledger are between the years 1833-1835. Page five of the journal begins by noting that the journal belongs to Daniel Freeman and is for Lawrenceville, North Carolina, commencing Sept 1833. According to Land Trust of Central North Carolina, who purchased the 112-acre site, “this unique property houses the remains of the Lost Town of Lawrenceville, an important historical and cultural asset for Montgomery County. Lawrenceville served as the county seat in the mid-1800s and the courthouse burned prior to being moved to its current location in Troy. The town was located on the historic trading path that went from Salem to Fayetteville.” http://landtrustcnc.org/2013/historic-lawrenceville-property/

Lawrenceville was the fourth county seat for Montgomery County, North Carolina, the original town plat dated July 2, 1817, nearly one year before Isham Gunter wrote his will. I was able to find a reconstructed map of what the town might have looked like in 1836 when my third great grandfather, William Marks, lived there. According to research, Lawrenceville, named for Captain James Lawrence, the U.S. Navy commander of the USS Chesapeake, whose dying command to his officers was “Don’t give up the ship.” Estimates average that the population of the town was about 500 people and a U.S. Post Office established in 1818; the town had two General Stores, one belonging to Daniel Freeman. The map does not show where Daniel Freeman’s General Store was located but based on other research found on Daniel Freeman, I can only assume that his store was located near the center of town, in the public square where also the court house was situated.

Page seven of the journal is the opening of business with the first sale to a Miss Ann Bledsoe for $1.00. Matson Williams, Hudson Taylor, Ebenezer Hearne, Daniel Freeman, and Henry Davis finish out page seven. Some of the names in the journal are familiar, as I have seen them in Montgomery County Census records and other documents I have found over the years. I came across a few names, Ferrell and Poe, no longer found in Montgomery County, but prominent in Chatham County records.


Several Marks’ are listed making purchases at Daniel Freeman’s store. I am trying to tie these Marks’ together as I believe they must all be from the same family. My third great grandfather shows up on page 106 (Feb 1834) making a purchase for 2 dozen shoe tacks. There are several other entries in the store ledger of him making purchases for supplies to make shoes. I was happy to have found this as it lends credence to the Census records that list my third great grandfather as a shoemaker.

On the same page is listed Elias Marks making a .25-cent purchase and I wonder if he and William Marks went together to the store or perhaps ran into one another at the store and exchanged pleasantries. I discovered that descendants of Elias Marks made a move to Rockingham, North Carolina in the mid-1800s. More on that line of the Marks family in a later Blog.


North Carolina experienced a gold rush in the 1820s and 1830s, becoming the nation's largest producer of gold before the great California gold rush of 1849 (https://www.ncpedia.org/industry/gold-uwharries) and I imagine that my Marks ancestors were in the Uwharries working at the gold mines established there. By the 1830s, there were at least 15 mines in operation. The Russell Mine was one of the largest gold mines in the Uwharries, located in the northern part of the county, El Dorado. I firmly believe that my Marks ancestors worked at the Russell Gold Mine and probably at the Beaver Dam Gold Mine in Flag town. There is a great Blog on the gold rush of North Carolina posted at the Blog Jobs Children (http://www.jobschildren.com/search?q=reed+gold+mine) that gives one an idea of what a gold mining town must have looked like and what it was like to live there. I plan to visit Gold Hill in the very near future to learn about this myself.

Again, in Nov 1833, both Catharine Marks and Elias Marks makes a purchase for Ben (Benjamin Marks). Who is Ben to Catharine and Elias? I know Elias Marks married Judith Allen so Catharine is not his wife. I also know that Elias is not Catharine’s brother as Daniel Freeman lists her as Mrs. Catharine Marks – meaning that Marks is Catharine’s married name. Perhaps Elias is her brother-in-law and brother to John Marks, her husband. If Catharine and John were the parents of William Marks, this would make Elias the Uncle of William Marks. I also know that Ben is not the son of Elias Marks, as he is not in later Census records or court records. However, Elias did have a grandson named Benjamin Franklin Marks much later (1881). Could the grandson be named for a family member? I think Elias may possibly be the brother of William Buck Marks and Catharine is his mother.

Nov 1833, William Marks makes what I believe to be an interesting purchase of tuck combs. In the 1830s, female hairstyles included braided loops of hair affixed to the top of the head with decorated combs. These combs were quite the popular item in Daniel Freeman’s store, as almost every purchase made by a female would include tuck combs. I wonder whom my third great grandfather was buying a tuck comb for in 1833. His future wife, Leah Caroline Fesperman, was only 10 years old and lived across the river in present day Morrow Mountain. William Marks would have been 38 years old in 1833. I have often wondered if he had a wife that perhaps died. If so, no one has ever found her and there is no family tradition that he had ever been married before. Perhaps the tuck comb was for his sister or mother.
In Dec 1833, Benjamin Marks makes another purchase and, once again, included in the purchase is something for Buck (William Marks); John Marks makes a purchase directly after Benjamin. Whenever I see people in the same place at the same time, and especially in a small town, as Lawrenceville was, I cannot help but wonder if they traveled together to Daniel Freeman’s General Store or if they just happened to run into one another. I take notice that Benjamin Marks, more times than not, made big purchases. Notice that Benjamin bought Martingales (tack used in horse training) and John bought a saddle. It looks like the Marks men have acquired a horse and want to train it.


The Solomon’s are a familiar name to Marks family researchers. The Rev William Solomon married Tabitha Marks. I recently had the good fortune of contacting two women who are the fourth great granddaughters of the Rev William Solomon and Tabitha Marks. A lot of research on the Solomon family has been completed, yet almost none on the Marks family, not for a lack of trying, but mainly because there is not a lot of information to go on. However, both of these women were able to offer me some insight, more clues, to the Marks family as well as provide me with an alternate viewpoint. Sometimes the information provided is not one that is expected. While sifting through all the information, I ran across the name Diana Gordon of Clan Gordon in Scotland. There is a Starling Gordon found in the Daniel Freeman store ledger and I can’t help but wonder if this man is a cousin or uncle to the Rev William Solomon and came to Lawrenceville with him. I will write another blog about my relationship to the Solomon family and Clan Gordon at some point; for now my focus remains on solving the mystery of my third great grandfather, William ‘Buck’ Marks, and how he might be related to the Marks listed in Daniel Freeman’s journal.

While I do not yet know the relationship between Tabitha Marks and William Marks, I am sure that one exists because William Solomon makes purchases for the Marks family. Could Tabitha be the sister or cousin or even the daughter of my William Marks? That is the question I want answered. I learned from one of the Solomon/Marks descendants that she believes Tabitha had a sister named Nancy, who married a Carter, a family I also descend from; I have added a note in my journal to research this line. The information I am gathering is almost overwhelming and I am finding that tracking the leads in a journal helps. Here William Solomon makes a purchase for T. Marks; this is new information for me as I am not aware of a T. Marks.


John Marks buys tobacco in Mar 1834. Could this be the same John Marks with the Land Grant in 1807 on Clarks Creek in Lawrenceville? Is this John Marks the man that brought his family to Montgomery County, North Carolina and my fourth great grandfather? 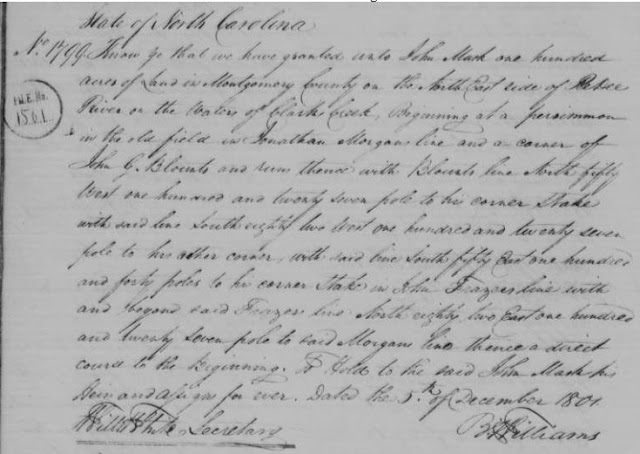 On page 384, Jun 1835 a Nancy Marks suddenly appears in Daniel Freeman’s General Store. I am learning that this is the Marks trade sign, suddenly appearing from nowhere and leaving their descendants wondering where they have been all this time.

Nancy Marks – Is this a daughter of John and Catharine? Married Marcus P. Carter

Below are maps that I found at http://www.carolana.com/NC/Counties/montgomery that show how Montgomery County looked when the Marks family lived there from the early 1800s through 1850 when William Marks married Leah Caroline Fesperman and their first child, Jane R. was born. 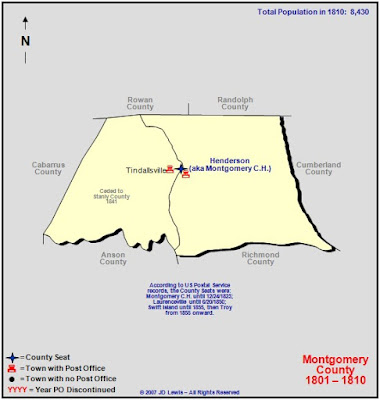 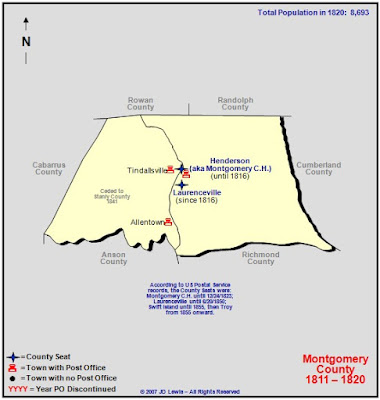 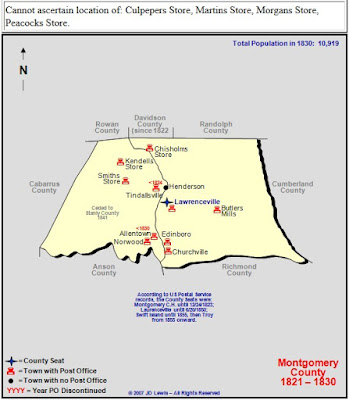 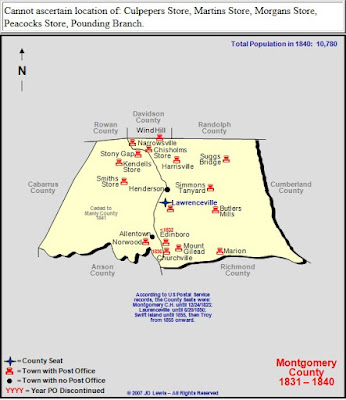 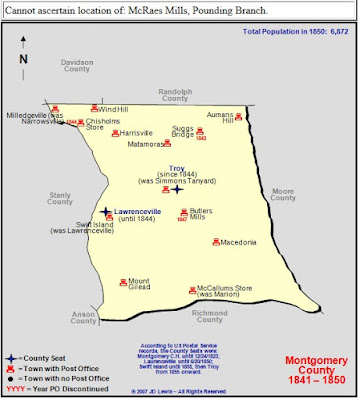