The Chisholm Family - By: J. Chisholm

Murdock Chisholm acquired 50 acres of land from John Mason, recorded in Deed Book B, page 19 Richmond County Registry. The date on the first page is March 29, 1783. The deed was duly proved by the oath of John Webb and ordered to be registered by the September Court of 1784. By way of location not much is stated other than it is near Mountain Creek. James Sanders’ corner is mentioned. Also mentioned are two white oaks and a blackjack marked by Solomon Sprawls and Anguish Chisholm for a dividing line. Trees marked by John Mason and Matthew English are mentioned. Angus (Anguish) Chisholm was a witness to the deed. 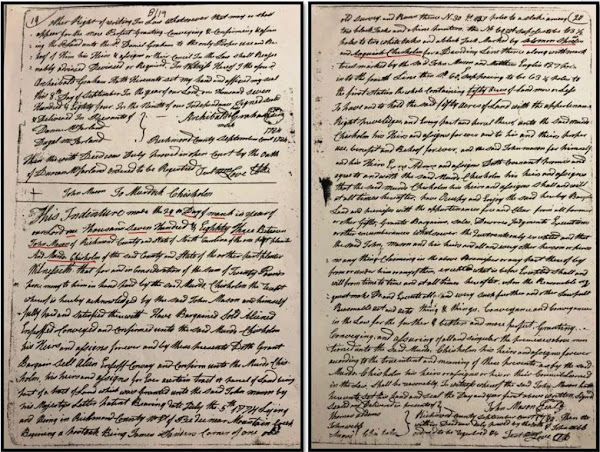 Murdock Chisholm and wife, Mary sold 50 acres of land to William McDaniel (aka William McDonald), recorded in Deed Book B, Page 403 Richmond County Registry. The date on the first page is November 25, 1785. The deed was duly proved in open court by the oath of Owen Slaughter Jun. It was ordered to be registered by the April Court of 1788. These 50 acres of land is the same land found in Deed Book B, page 19. Malcom Chisholm and John McDonald are two of the witnesses to this deed. 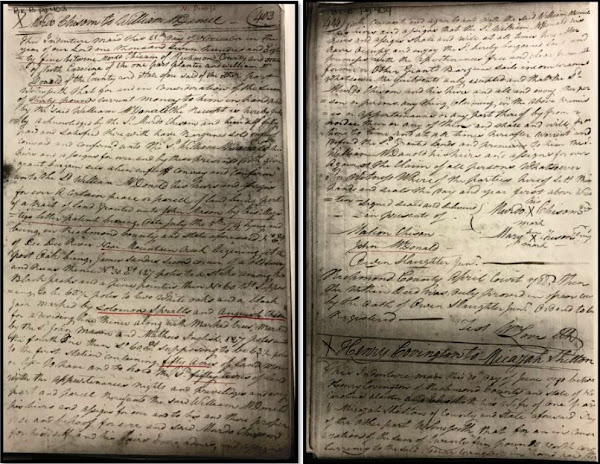 By following the chain of title of the Murdock Chisholm 50 acres of land, I found a deed from William Stringfellow to Enoch Stringfellow registered in Deed Book C, page 551 Richmond County Registry. The date on the first page is February 4, 1796, and the deed was duly proved in open court (April Term 1796) by the oath of Joseph Hines Esquire and ordered to be registered. The description of the second tract in the deed is the Murdock Chisholm 50 acres of land but its added information that helps in locating the land. The beginning of the description states the land is on Broom’s Branch. 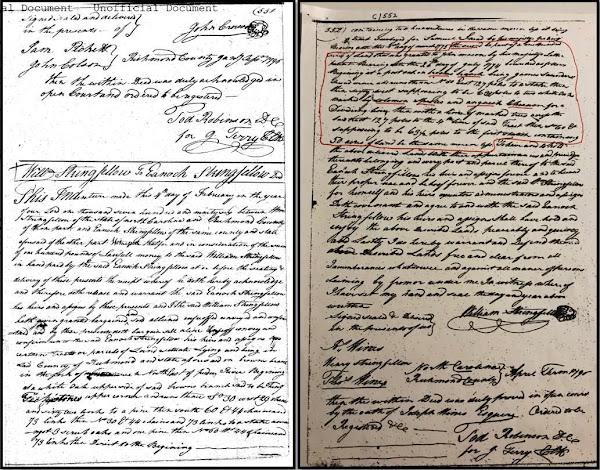 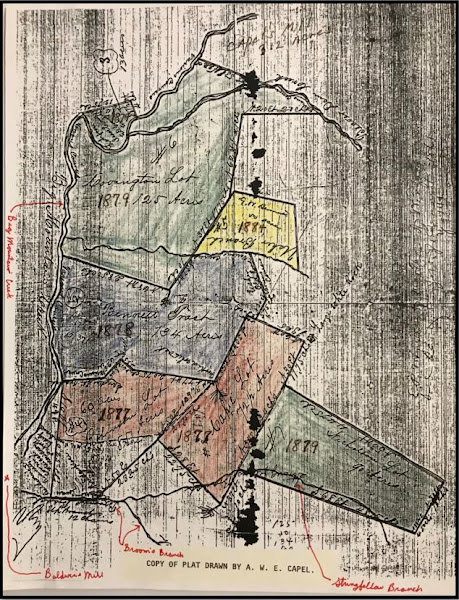 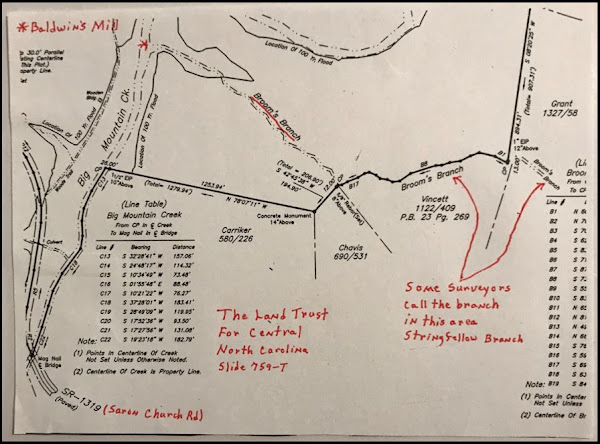 Several factors make me believe I have found the correct area. Daniel Chisholm, son of Murdock bought land from William Stringfellow, recorded in Deed Book C, page 551 and sold land that was once Murdock Chisholm land to his son Enoch Stringfellow. In an 1817 letter Eli Stringfellow, son of Enoch Stringfellow stated he was the uncle of Mary Chisholm (later Mary Chisholm Ewing) daughter of Daniel Chisholm, son of Murdock. While I have not figured out how Eli is the uncle of Mary, nevertheless Eli said it in the letter. So, the Chisholm’s and Stringfellow’s were in the same general area, probably were neighbors, had business dealings with one another and appear to be related but as of this day, I do not know exactly how. Also, the AWE Capel map has Stringfellow Branch on it.

The question now becomes what happened to Murdock Chisholm after he sold his land recorded in Deed Book B, page 403, Richmond County?

Facts that were known when I began to search for Murdock Chisholm after the land sold:

5. I did not find a 100-acre grant to Murdock Chisholm. He must have bought his land from an individual.

6. In 1843 Montgomery County deeds were destroyed by fire.

7. I saw a grave marker in the Scotch Cemetery at the end of Rush Rd. (NCSR No 1538) that had Dock on it. I felt like that stood for Murdock. That marker is not there now. It was destroyed by people who vandalized the cemetery. One record (I do not know if it is correct) I saw indicated Murdock was 88 years old when he died.

8. Daniel Chisholm, son of Murdock is buried in the Scotch Cemetery at the end of Rush Rd (NCSR No 1538).

10. The location of the grave of Benjamin Rush.

11. The location of one old Rush home place.

13. I had been told of the location of a very old house in the area on the property of Cleo Wooley. 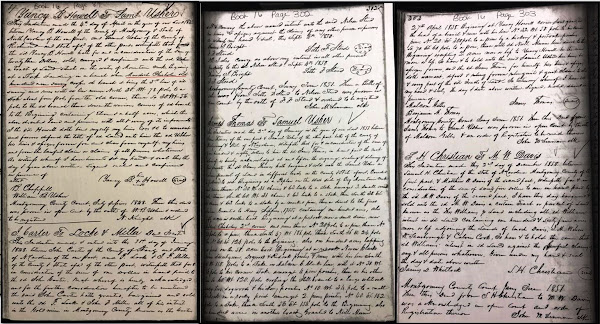 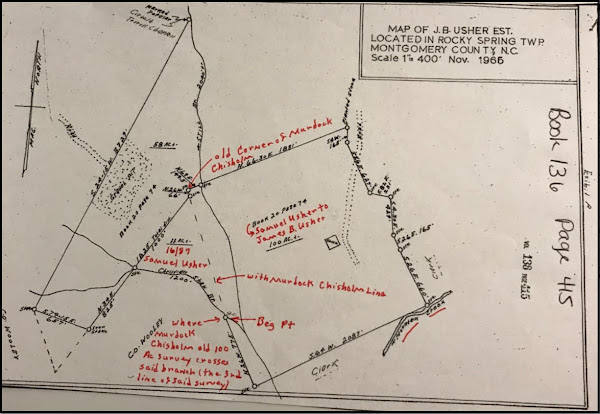 It is remarkable that even today the general shape of a portion of the Murdock Chisholm 100-acre tract can be seen on the Montgomery tax map. 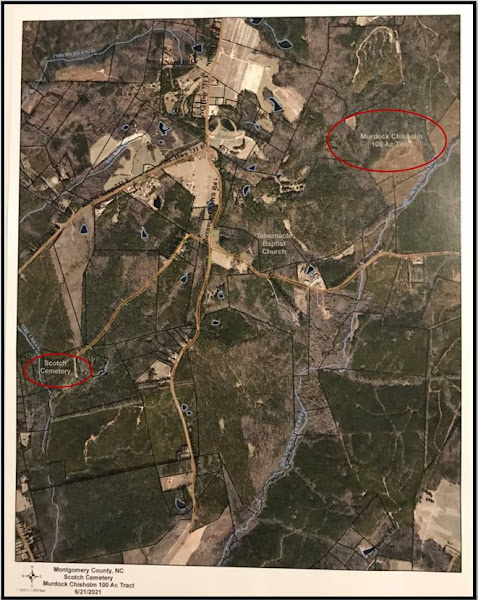 Mr. Arron W. E. Capel II bought the house shown on the Map in Deed Book 136, page 515 from Cleo Wooley. Mr. Capel bought the house because it was the closest in age to his Richmond County circa 1797 Isaac Ewing house (also called Touchstone House), was of similar construction and even type of nails used. Mr. Capel took pictures of the house before he secured the material he needed.

Could there have been another very old house on the 100 acres of land? That is possible but the present-day heirs of Cleo Wooley are not aware of one. 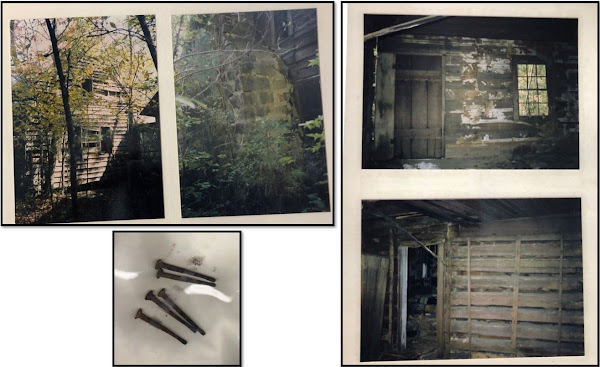 I do not have any information on Murdock Chisholm prior to 1783 other than his daughter Rachel married James McMillian and James served in the Revolutionary War. Rachel told some stories of her encounter with Tories when James was at war.

In addition to having a gold mine in the Beaver Dam Creek area, Angus (Anguish) Chisholm, son of Murdock, had a store. One document I saw listed his son, Whitson H. Chisholm as a merchant. 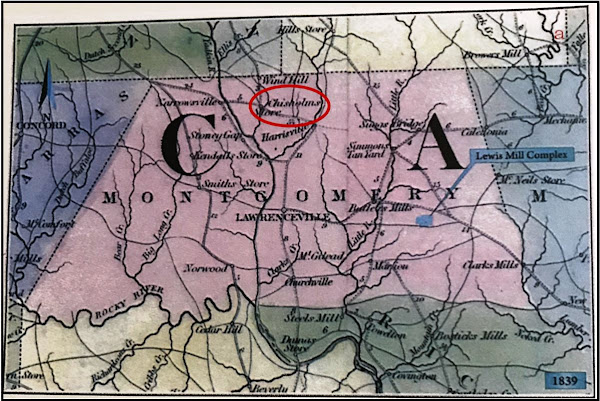 Whitson H. Chisholm married Martha Stanback. They were married only a short time and she died July 23, 1828. 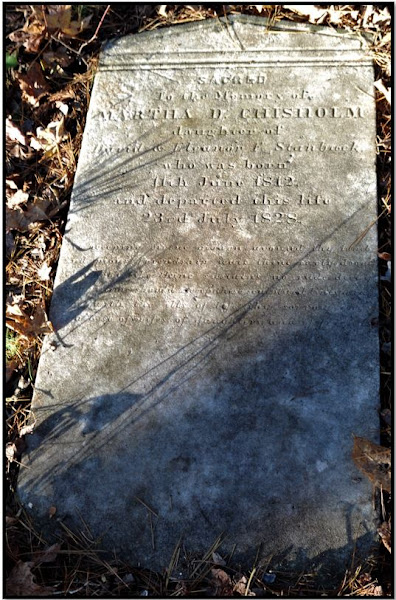 Recent research on the Angus (Anguish) Chisholm Family by genealogist Sue Forshee Cooper is shown below.

Malcom Chisholm, son of Murdock married Mary (I believe Sellers). They had two sons from this marriage. John was the name of one son, and I do not know anything about him other than he had children per the will of his mother recorded in Will Book 1, page 57 Montgomery County Clerk of Court’s Office. The other son, Daniel, married Mary Allred March 8, 1821. Two children came from this marriage. A daughter Rachel born in 1832 and died May 5, 1858. A son, John S. Chisholm was born February 6, 1822, and died July 24, 1905. Daniel Chisholm died May 27, 1849. 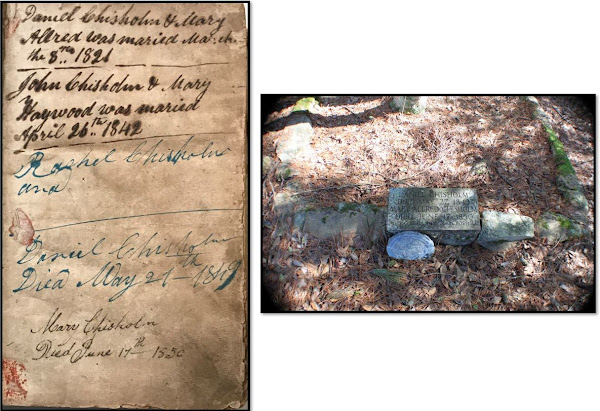 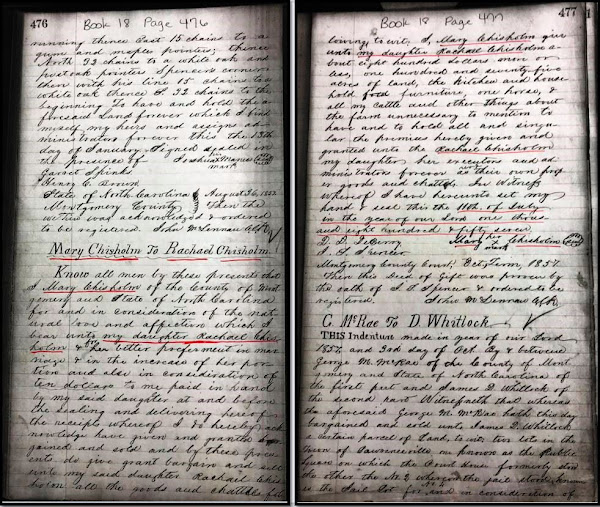 Daniel Chisholm, son of Murdock is buried in the Scotch Cemetery at the end of Rush Road (NCSR No 1538). He died in 1824. 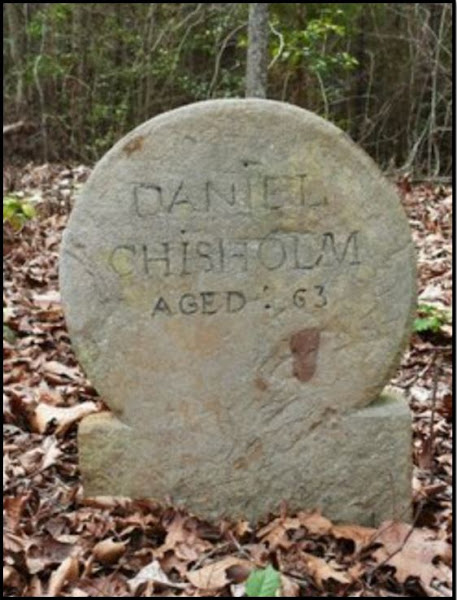 The oldest Chisholm I have a picture of is Mary Chisholm, daughter of Daniel, son of Murdock. Mary married John Ewing. John and Mary are buried in the Ewing Cemetery at Sulphur Springs. 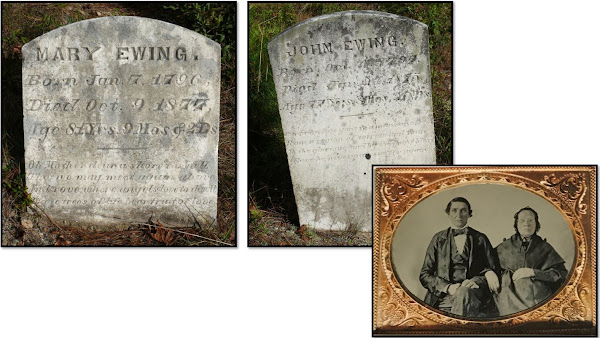 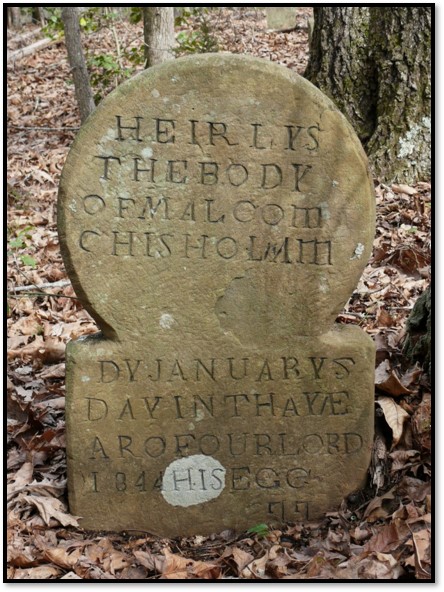 In the blog you have noticed in various places I say I believe certain things. The reason I say that is because I am not one hundred percent sure, but the evidence points in the direction of what was said.
Posted by Uwharrie Roots at 9:08 AM