I always end up frustrated when I try to find genealogy rather than letting genealogy find me. Searching for one name is like looking for a needle in a haystack. It is nearly impossible to find, and if you do find it, then you must search the more to make sure it is the very same person, and not another with the same name, that you are looking for. It is so much easier, for me anyway, to open a file, start reading from the beginning, and let the pieces of the lives of a family come together. Without fail, eventually, I will stumble across how that family is related to me.

That is the way it happened with the Blog, Old Seth Williams. The estate file for Seth Williams Jr yielded information on multiple families that I knew nothing about before. The best thing is that I broke through a brick wall with Mary Polly Davis Henderson, the wife of Lockey Henderson. For years, researchers had been searching for her parents, and now I know who they are.

If you read the Blog, Old Seth Williams, you learned that Matthew Davis Sr had purchased the interest of Thomas Williams, the brother of Seth Williams Jr, both the sons of Old Seth Williams. I found the estate file of Matthew Davis Sr, who died around 1857, in Randolph County, North Carolina. In that estate file I came across Green Davis, the son of Matthew Davis Sr, whose inheritance money was collected by Parson Davis, the brother of Green. So, it was obvious that Green was still alive, and I wondered why he could not accept the money himself. The most logical reason was because he lived out of state.

A little further into Matthew Davis’s estate file, I came to a name I am very familiar with – Lockey Henderson. He is my third great granduncle and the son of Susannah Smart Morgan Henderson, my fourth great grandmother and her second husband, Joel Henderson (another brick wall). Lockey married Mary Polly Davis and their first child, Joel Green Henderson, was born in 1843. Named after both grandfathers, Joel Henderson, the father of Lockey, and Green Davis, the father of Mary.

Here the pieces just began to connect. Genealogy had found me.

As a side note, Matthew Davis Jr, the brother of Green Davis, married Massan Henderson, the sister of Lockey.

Because of Parson Davis collecting and signing for the inheritance for his brother, Green, I knew Green was not dead. I also knew that Green was not able to collect the money for himself. I’ve seen enough estate files with Powers of Attorneys to know that Green must not be in the state of North Carolina if his brother was collecting his inheritance, but Matthew Davis Sr’s estate file did not have a Power of Attorney in it for Green. So, I began searching for Parson Davis because wherever he ended up, Green would probably be there too – Parson had to give Green his money.

After winding my way through Parson Davis’s life; he married at least three times, first to Elizabeth Hendrix in 1844, in Alabama, second to Sarah Coggin in 1855, in Montgomery County, North Carolina, and third to Rebecca Foster 1832–1877, in Alabama. I found both Parson and Green buried at Choctaw Corner Cemetery in Thomasville, Clarke County, Alabama, along with their wives.

Green Davis married Jane Hall around 2 Feb 1824. E. H. Carrington was the bondsman. Both are mentioned in the estate file of Robert Hall, Jane's father, who died in 1857 in Orange County, North Carolina. 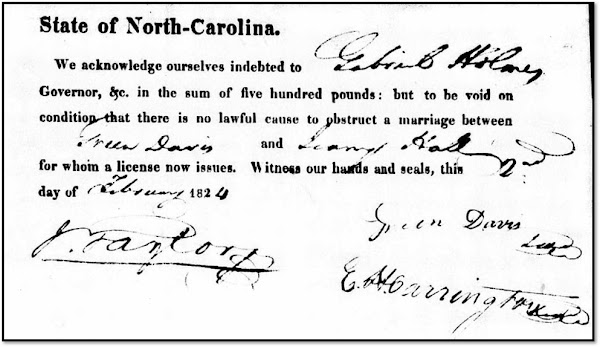 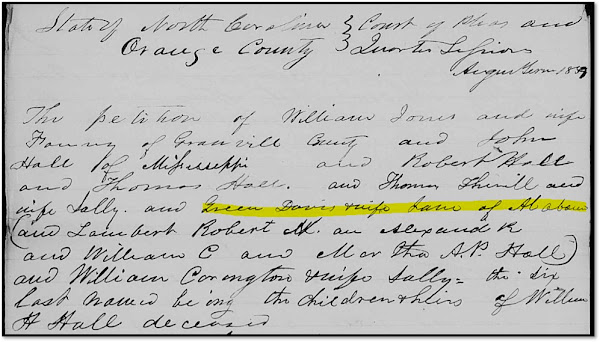 In 1830, Green Davis is living East of the Yadkin and Pee Dee River in Montgomery County, North Carolina. 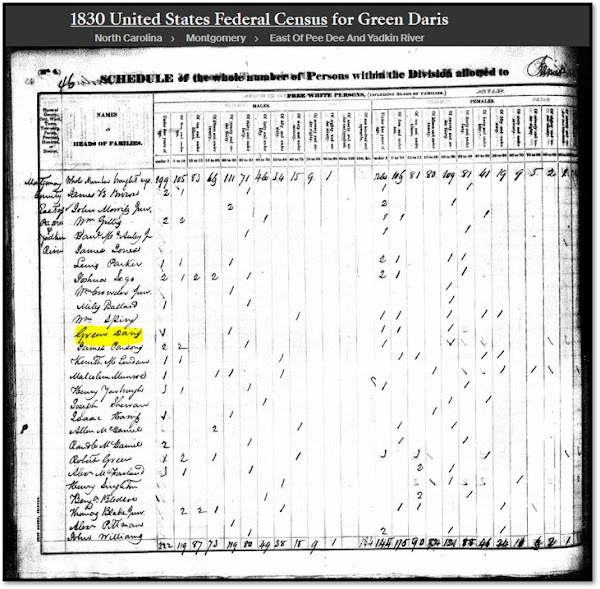 1840, Green Davis resides on the East side of the Pee Dee and Yadkin River in Montgomery County, North Carolina. 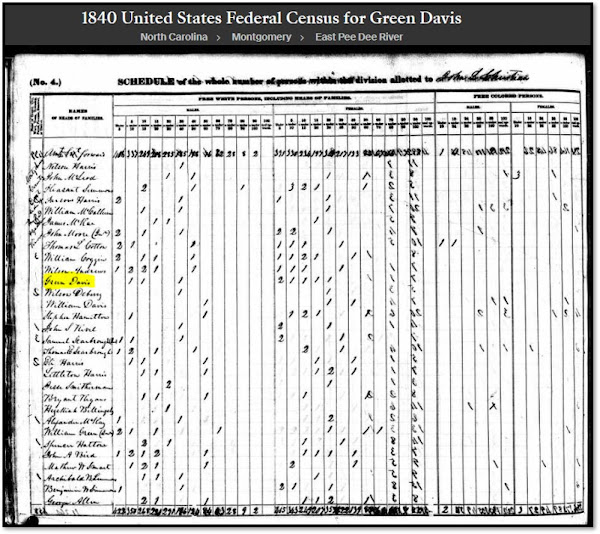 1850 finds Green and Jane Hall Davis in Clarke County, Alabama. Living with them are several others whom I have yet to research, but probably their children.

1860 finds the couple still in Clarke County, Alabama. Henry H. is probably Henry Harrison who was on the 1850 Census. Both, probably sons of Green and Jane.

The 1870 Census shows Green and Jane Hall Davis in their late 50s and still living in Clarke County, Alabama. Hannah Wiggins has not been researched yet. H. C. Privett is the grandson of Green and Jane by their daughter, Ann, who married Matthew Privett. Ann, wife of Matthew Privett, is mentioned in Matthew Davis’s estate file. 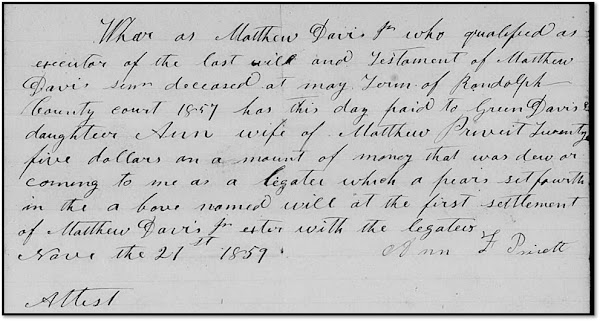 Now in their seventies, the 1880 Census is the last one where Green and Jane are found. They have lived full lives. Both born in North Carolina, they married in 1824, and migrated to Alabama around 1845.

In 1884, Green and Jane celebrated their 60th wedding anniversary, noted as the oldest married couple in Choctaw Corner.

Jane Hall Davis, wife of Green Davis, and mother of Mary Polly Davis Henderson, died in Oct 1885, Aged 78 years 4 months 23 Days. She was born and reared in Orange County, North Carolina. In 1845, she and husband Green, moved to Perry County, Alabama where she resided until 1850, then moved to Choctaw County, Alabama, where she lived the remainder of her life. She was the mother of 17 children – I have not researched them yet – but only 2 survived her. She died a member in good standing of the Baptist faith. 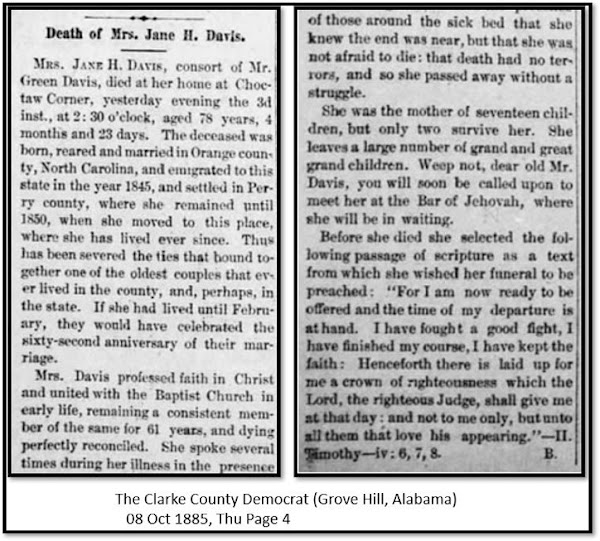 Green Davis, a native of North Carolina, and father of Mary Polly Davis Henderson, died 2 Feb 1888, in Choctaw Corner, Alabama. He was one of the oldest men in the county. He was 86 years old. He was noted as an exemplary member of the Baptist Church, the New Hope congregation. 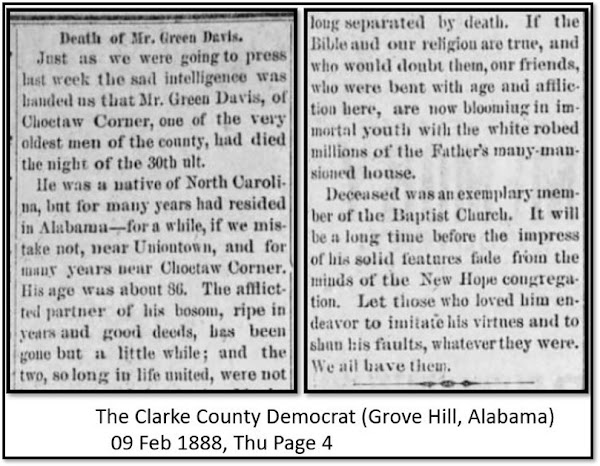 Mary Polly Davis Henderson, wife of Lockey Henderson, preceded her parents in death in 1863. The year of birth on her gravestone is incorrect. She was born, as noted by the 1850 and 1860 Census, about 1825. This is also more in line with her parents’ marriage in 1824. She is buried at the Henderson Family Cemetery in Eldorado, Montgomery County, North Carolina. 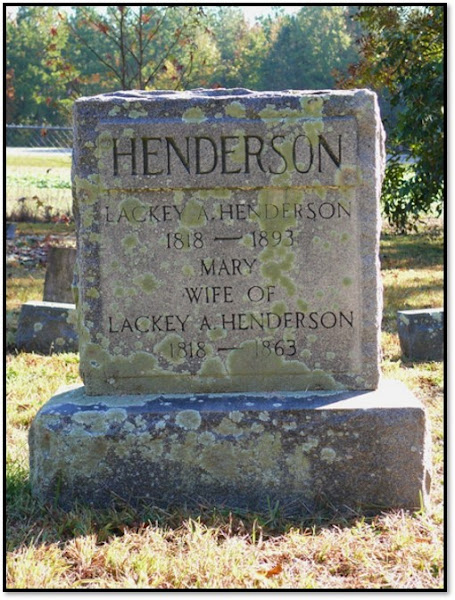 Posted by Uwharrie Roots at 2:43 PM