Mary Chisholm Morrison is one of those ancestors that has been hiding in plain site for a long time. As with most women in that era she can only be found through her husband. The fact that there are several John Morrison estate files, land grants, court records, Census records, and deeds make it nearly impossible to determine which of the several men who bear this name are the one I am looking for. The laborious job of reading records and putting families together to figure out who each John Morrison was continues but I wanted to share on this Blog what I have found out so far.

The only established fact that I have is that Mary Chisholm, daughter of Murdock Chisholm, was the wife of John Morrison. I believe she was born in Scotland around the year 1767. Per Murdock’s estate file, John and Mary Morrison lived in Richmond County, North Carolina in March 1825 when she received $12.02 ½ when her father’s estate was divided. 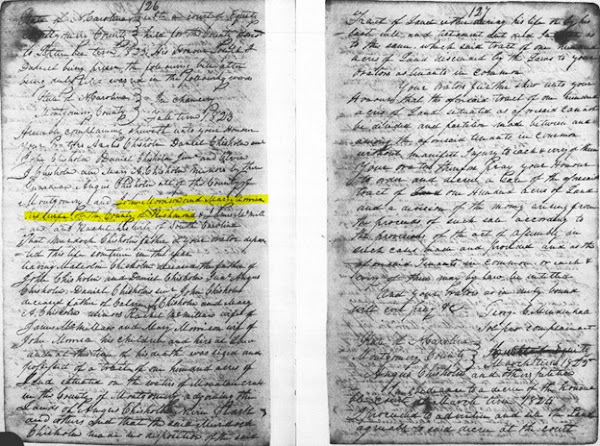 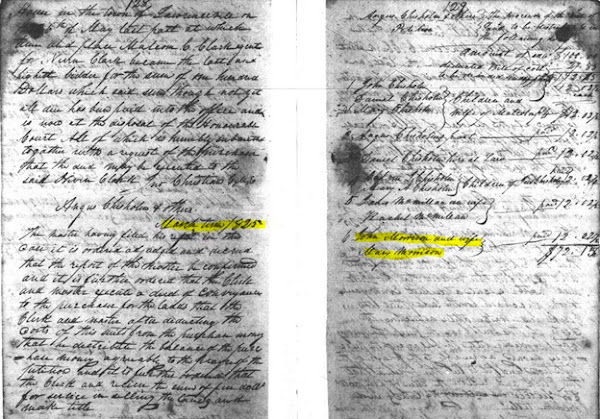 This John Morrison married Sarah Morrison, daughter of Norman and Christian Morrison. John and Sarah had three sons, Angus D (b. about 1832), John Murdock (born about 1834), and Norman Allan (born about 1836), prior to John’s death in 1838. Sarah is mentioned in her father’s will as Sarah McEachin, wife of James C. McEachin. All three estate files make mention repeatedly of the three sons and note them as being the heirs at law of John Morrison Dec’d.

Although I have not been able to pin a date of birth on this John Morrison, reading through these estate papers gives me the impression that he was older, perhaps a lot older, than Sarah who was born about 1810, and that perhaps Sarah was his second wife, though the estate papers never mention any other children or heirs belonging to John. I say this because John was a wealthy man who had accumulated land and slaves. I normally do not see this amount of wealth in younger men. Also, the Census record for Richmond County, North Carolina shows John’s progression from 1790 to 1820 with a wife and at least 3 children. Then, in 1830, the first wife is gone, and a 68-year-old John is living with 2 females ages 15 through 19. Sarah was born about 1810 and would meet the age requirement here.

There are other scenarios too as there are other John Morrison’s listed on Richmond County Census records who meet the age requirement for John. This is just one of the theories I am chasing. 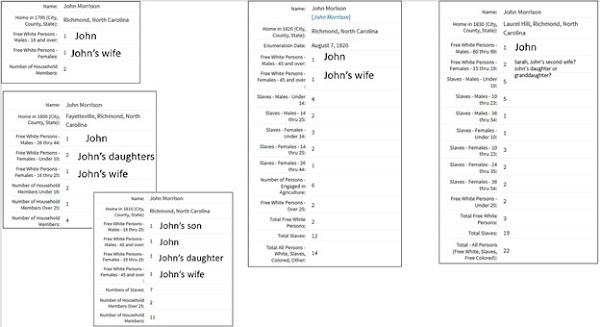 In the 1839 estate file, Sarah petitions the court to appoint a jury of freeholders and one Justice of the Peace to examine the estate of her deceased husband as she believes the provisions left to her in the will of her husband are less than what is allowed by law. I have not been able to find the will of John Morrison. It is not included in any of the estate files.

Sarah does win her case and a jury of men are dispatched to the estate of John Morrison to ascertain exactly what is, by law, due her. The jury found that the will did not meet the requirements of the law and proceeded to divide the real and personal property of John Morrison to meet the dower requirement. Sarah was awarded 290 acres of land, being part of several tracts including the dwelling house and all outbuildings, ¼ of the slaves, Peggy Rose & child, George, Frank, and Reuben, she received $112.50 and ¼ part of the money notes and other perishable property from the estate. 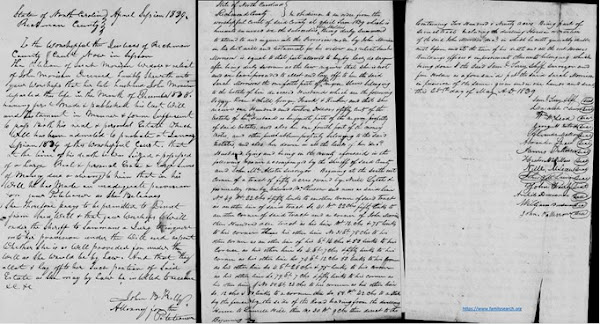 This could be the John Morrison I am looking for as there are mentions of people who had close ties to the Chisholm family, the Ewing’s, Robinson’s, and Haywood’s all intermarried with the descendants of Murdock Chisholm. The only issue is that this John is living in Montgomery County and not Richmond County. 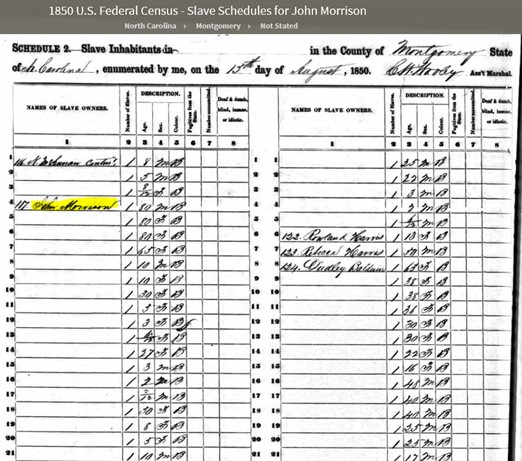 Estate file: John Morrison (1869) Richmond County: Gilbert Patterson, Administrator. Leaves lands and farm to sister Sarah and her husband, John A. W. Dees and father-in-law, James Dees. No mention of wife or other heirs at law. This may be another John Morrison.

Estate file: John Morrison (1886) Richmond County: Power of Attorney to Alexander Morrison from M.R. Morrison and wife Melissa from Columbus County, North Carolina for inheritance from the estate of John Morrison. This may be another John Morrison.

Estate file: John Morrison (1921) Richmond County: excluded, not relevant as this John Morrison died in 1921. The John Morrison I am looking for was born about 1762 and could not have lived this long.

Searching the North Carolina Supreme Court files found an 1852 court case between John Morrison and Abner Jenkins who had owed a debt to John since 1835. In this file is noted that John Morrison had more than one son, and his son, John R. Morrison is mentioned as “the son” who knew about the note on Abner Jenkins.

Abner Jenkins was born about 1797 in North Carolina. His great-great granddaughter, Mary Jenkins, who was born 126 years after him, would, in 1945, marry my Great Uncle, John Louis Morris. Mary Jenkins Morris died in June 2020 and was buried at White Crest Baptist Church in Montgomery County, North Carolina.

If this is the John Morrison I seek, the date of 1852 proves he is a different John Morrison than the one who married Sarah and died in 1838. John obviously could not institute a court case and testify in 1852 if he died in 1838.

Another family who had close ties to the Chisholm’s are the Pankey’s. As noted on the above document, Samuel Pankey entered bond together on 18 Mar 1844 in the Supreme Court case.

In 1824, Auzey Pankey, who married Elizabeth Chisholm, the niece of Mary Chisholm Morrison, wife of John Morrison, sold to John Morrison for the sum of $45 a tract of land in Richmond County on the Long Branch, said land was granted to Charles Hammond, and begins at the said branch at a stake...beginning corner of Shubale Weeks...to McKinnon’s line...to Bozeman's line....to Colemans line. Witnesses: Ralph Parnell and Arthur Robinson.

The Robinson’s were another allied family who had close ties to the Chisholm family through marriage. Arthur Robinson’s sister-in-law, Nancy Stanback, intermarried with John Chisholm, the brother of Mary Chisholm who married John Morrison. 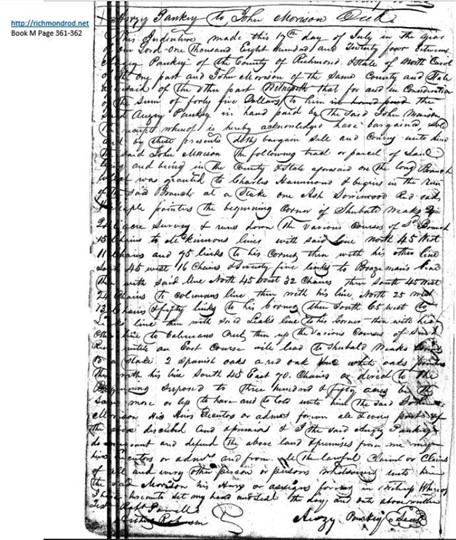 In 1814, Shubale Weeks and Stephen Weeks sold to John Morrison 240 acres of land lying in Richmond County north of Big Mountain Creek and adjoining the land of Isaac Lindsay for $120. Witness: John MacDonald, a name that continues to show up in every Chisholm family member I research! I have yet to identify who John McDonald is. 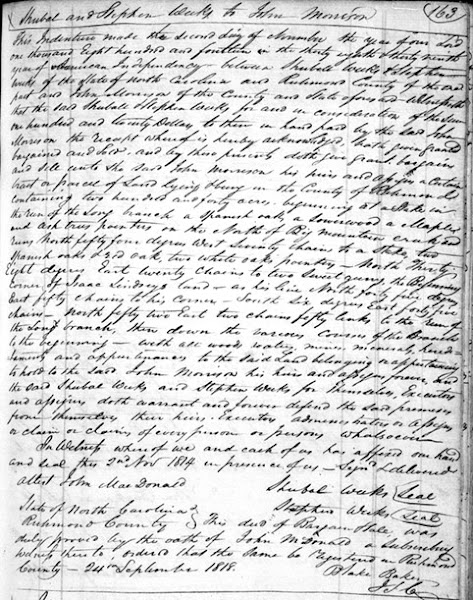 In 1844, John R. Morrison sold to Auzey Pankey for $300 a tract of land in Richmond County on the waters of Mountain Creek…containing 103 acres… except 9 acres which was deeded to Alfred Baldwin in the fall of 1807. Witnesses: John Pankey and Isaac Ewing Jr. 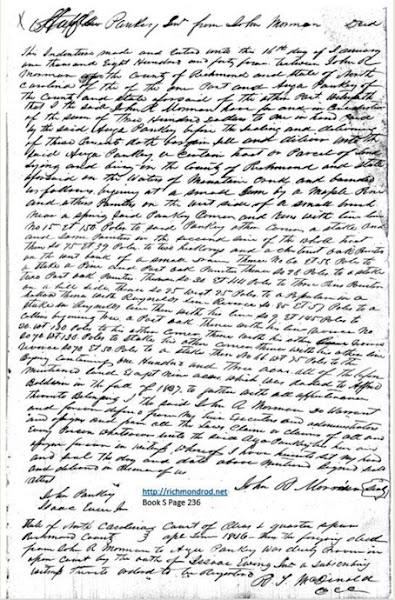 Posted by Uwharrie Roots at 7:30 PM