Joseph Gad Senr wrote his will on 20 Jul 1837, and is probably one of the most devastatingly straightforward wills I have ever read. He not only sees things (and people) as they are, he makes sure to put in place every protection available to him to protect himself and others against what he knows is going to happen. This is a man who not only sees the writing on the wall, he can interpret it, and plan to mitigate the risk or fall out as well.

Let’s jump into his will and you’ll see what I mean.

1. I give and bequeath to my son Joseph Gad…
2. I give to my son Mastin Gad…
3. I give to my three younger children, Thincy [Cynthia], Pinkney and Washington Gad…
4. To my wife Elizabeth Gad…
5. My slaves should remain on my plantation where they are now with my family…

Then, Joseph does something a bit unusual.

Item: my will and desire is that if any of my children should become dissatisfied with this my last will and testament and should try to brake [break] or overthrow the same that they shall have no part of my estate whatsoever and there [their] part or share which has been allotted them shall be divided amongst the rest of my children

He appoints his son Mastin and his friend Britain Chappell executors of the will.

I thought it a bit odd that a father would simply tell his children that if you disagree with me, then you get nothing. I wondered what would make a father say something like that or expect his children to argue over who gets what once their father dies. Most children who are grown and on their own as the two older children were, would be just fine with their younger siblings and mother getting the bulk of the estate for the care and education of the minor children. I saw nothing wrong with Joseph’s will. He was, according to the law, and culture of that era, putting in place the best possible solution that would protect his family after his death, as any father would.

But, that comment had me guessing there was some sibling rivalry going on in this family and daddy Joseph knew it.

The next paper in the estate file shows Elizabeth Gadd, wife of Joseph Gadd Senr, petitioning for a year’s provisions and her dower in Joseph’s lands. The court names Neil Nicholson Esq, Dudley Baldwin, Martin Rush and Howell Harris as persons to lay off and allot Elizabeth a year’s provisions. 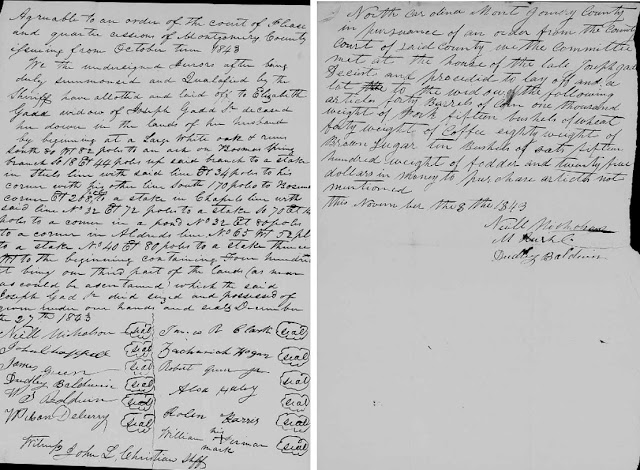 The next set of papers show Mastin Gadd Administering the estate as his father called for and the settlement of the estate. All tasks were seen to and the estate was wrapped up nice and tight. No arguing or disagreements among anyone.

Evidently, when daddy spoke, even from the grave, these kids listened. 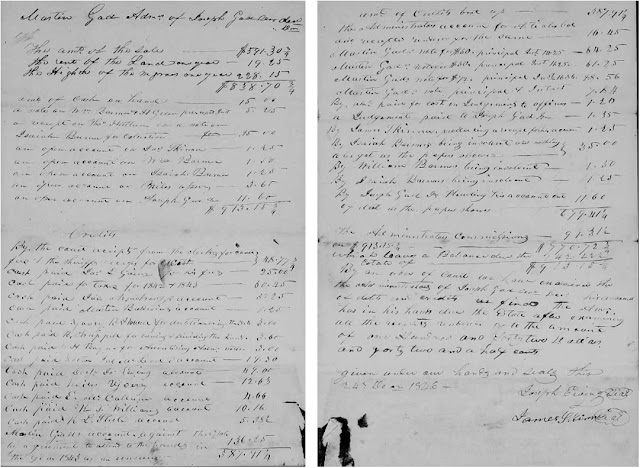 That comment made by Joseph in his will still sat with me though and I could not resist peeking into the lives of his wife and children to see how things turned out for them.

I turned to his wife’s estate file to find that she died in 1856, outliving her husband by more than ten years. On 6 Oct 1856, at a court of pleas and quarter sessions, the last will and testament of Elizabeth Gadd was produced and proven by subscribing witnesses.

That’s not so bad…until I read down the page.

On 7 Oct 1856, “the order made on yesterday of this term in relation to the paper writing purporting to be the last will and testament of Elizabeth Gadd is Rescinded by this court…”

And there it was, the reason why Joseph Gadd Senr wrote what he did in his last will and testament. Mother and daughter were trying to get one over on sons and brothers. Cynthia was to get the majority of her mother’s estate, then the remainder sold to pay just debts and if anything was left, it was to be divided among the sons.

And I direct further that the other property monies and effects whatsoever to be sold and pay my just debts and remainder to be equally divided among my other children. This is the way which I bequeath and order that the property which now hold and possess to be distributed. I set my hand and seal the day and date as herein written and signed in the presence of David Harbert and James Skinner 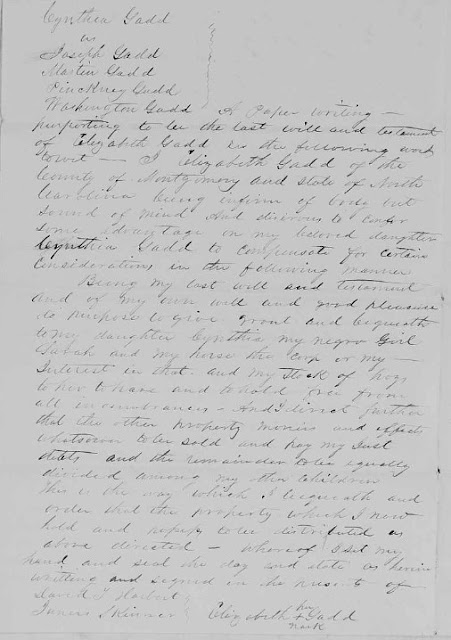 The court direct the following issue to be made up and sent up to the superior court to be submitted to jury there being no jury in the county court to wit is said paper writing or any thereof and is if so what part the last will and testament of the said Elizabeth Gadd or not. 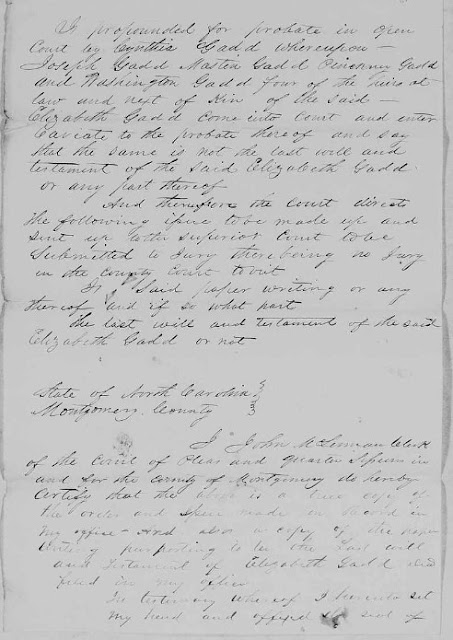 So, the Gadd brothers contested the last will and testament of their mother and are now in court fighting it out with their sister. The two subscribing witnesses were subpoenaed and Owen Hadley who is listed as a doctor is also summoned.

The last paper in the estate file for Elizabeth Gadd is for letters of Administration granted to Joseph Ewing on 6 Oct 1857. There is a separate file for Elizabeth located at Family Search showing the inventory of her estate. I am not able to find a settlement report nor the court file for the Superior Court. However, with letters of Administration granted to Joseph Ewing, I suspect that the higher court and jury allowed the Gadd brothers to contest the will and not have it executed. 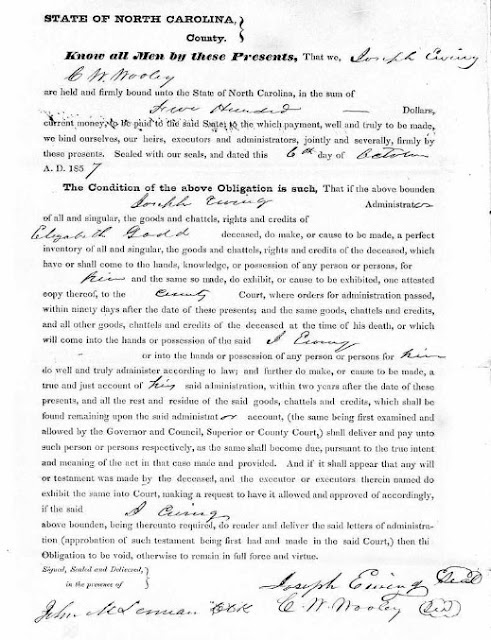 Posted by Uwharrie Roots at 3:30 PM