A Woman Who Has Whipped Two Men

Martha Jane Morgan Tucker, called Jane, has perhaps given me the greatest chuckle of all the ancestors in Montgomery County that I have come across. She is one of the most colorful and feisty women I have ever read about. Her descendants tell me she was a no-nonsense woman and the kind that took to heart any wrong perceived or implied. I imagine she kept her husband, James Tucker, on his toes.

In Jun of 1876, for reasons that are difficult to fathom for today’s generation, Jane Morgan Tucker, in what must have been a comical array of flying skirts, petticoats and hoop poles, attacked Mr. Jehu Davis. Jane was soon in the hands of the proper authorities and I am sure her husband, James Tucker, bailed her out of jail that day. The only detail left out of the below article was who the other man was that Jane Tucker whipped! 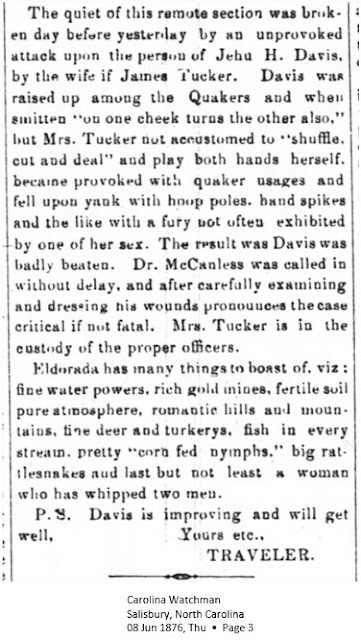 Jane is my first cousin four times removed, her father, Matthew Morgan, being my fourth great uncle, so Jane and I share Joseph Morgan, my fourth great grandfather and Jane’s grandfather, as our common ancestor. I stay in close contact with Jane’s great grandson and it is a joy to be around him and listen to the stories he tells about his Tucker ancestors.

Jane Morgan was born about 1835 in Montgomery County, North Carolina. She is the oldest child of Matthew Morgan, son of Joseph and Susanna Smart Morgan, and Sarah Harris Morgan, daughter of Littleton and Temperance Williamson Harris. Jane married James Tucker, the son of James and Amelia Tucker. I do not know Amelia’s maiden name.

The Tucker’s, like the Morgan’s, are a brick wall ancestor. James and Amelia Tucker, the in-laws of Jane Morgan Tucker, came to Montgomery County from Cabarrus County in the late 1830’s. I briefly mentioned the Tucker’s in my post Willis Morgan, son of Charles and Delilah Morgan when Lucy Talbert gave her deposition telling that a Mr. and Mrs. Tucker had come to visit the Charles Morgan family during a time when she lived in the Crump dower house with the Morgan family. Charles Morgan may have been Jane’s Great Uncle.

I know through Y-DNA testing that the Montgomery County Tucker family is part of the Tucker family called Cabarrus George Tucker and some of this family was in what is now Stanly County. They lived near Meadow Creek, an area that straddled the Cabarrus / Montgomery (later Stanly) County lines. I found a James and Amelia Tucker listed in the surviving records of Flat Rock Lutheran Church, located in current day Stanfield on Hwy 200. The records show James and Milly attended the church from at least 1834 to about 1840.

Jacob Tucker, the son of Cabarrus George Tucker, died in 1837 and is buried in the Flat Rock Lutheran Cemetery. It was shortly after Jacob died that James and Amelia Tucker showed up across the river in the Eldorado community and the James and Milly Tucker on the west side of the river, disappeared from that area. The search continues to prove or disprove that this is the same Tucker family. 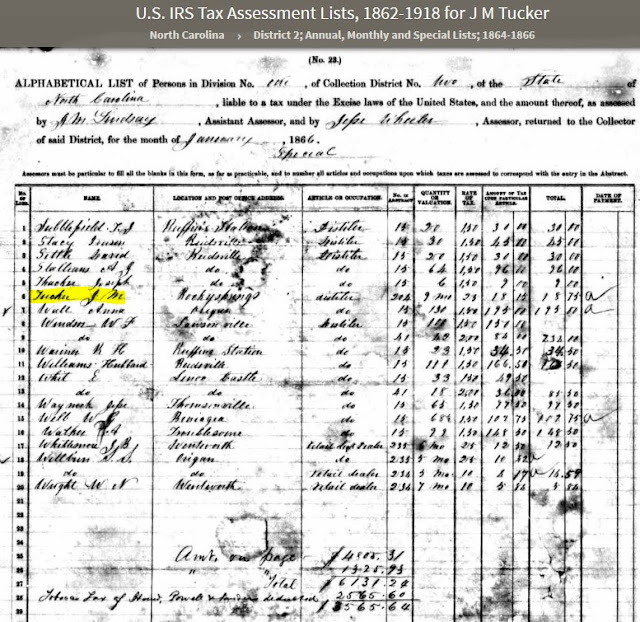 With no love lost between the Tucker’s and the Davis’s, in 1877, James Tucker and Jehu Davis are found in court. Jehu Davis made a complaint of slander and swore an Affidavit which resulted in an order of arrest. Jehu Davis claimed that James Tucker came to his house using profane language and calling him a thief and a liar in front of his wife, children and hired servant. Jehu claims he was provoked and mortified to the sum of $2000.00 and was now suing Tucker for said damages. 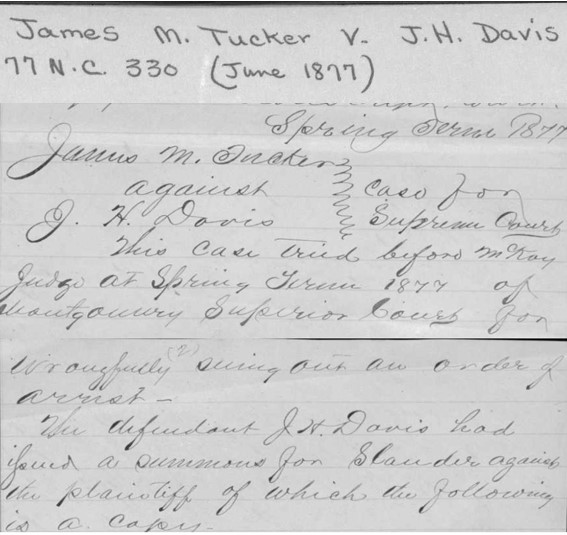 In a counter suit, James Tucker claimed that Jehu Davis swore out the arrest in an attempt to extort money from him. That after the arrest and imprisonment of one day, Jehu offered James to permit him to be released upon the payment of $150. James paid the money in order to procure his liberty and then counter sued for $500 damages. 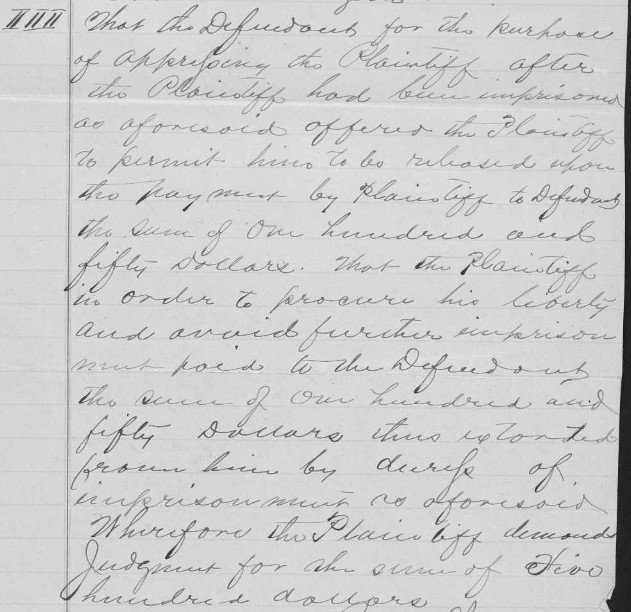 In the end, judgment was reversed, and the action was dismissed.

The 1880 Census shows that James and Martha Jane Morgan Tucker are living next door to Jane’s mother, Sarah Morgan, age 72, and to Jehu Davis, the man that Jane attacked in 1876. Jehu Davis claims his birthplace as New Jersey and his occupation is listed as U.S. Gauger. Ancestry has incorrectly transcribed the occupation as U.S. Ranger. But it is indeed U.S. Gauger.

In the book The Social History of Bourbon by Gerald Carson is explained what a U.S. Gauger is and the job responsibilities.

When the United States took charge of the manufacture of all alcoholic drinkables, there came into being an army of officials, inspectors, GAUGERS, government aides called storekeepers, guards and intricate regulations as to the seals, stencil plates, locks and keys of distillery buildings and mountains of paperwork.

The Gauger measured out the amount of grain for distilling, saw that the composition of the mash was strictly adhered to. A government man on hand when the whiskey barrel was filled and burned the history of the distillate into the barrel head on what was called the stamp or government end.

When a barrel of aged whiskey was withdrawn from the warehouse, the Gauger applied a wantage rod for determining the ullage - the empty portion of the cask, due to evaporation and absorption. The storekeeper was under strict orders to admit no one to the warehouse, not even the owner, except in his presence.

Checking the U.S. Register of Civil, Military and Naval Service records between 1863 and 1959, I found Jehu Davis listed for year 1881 as a Storekeeper and a Gauger. Jehu Davis was also a mineralogist and a Postmaster, as well as a farmer. 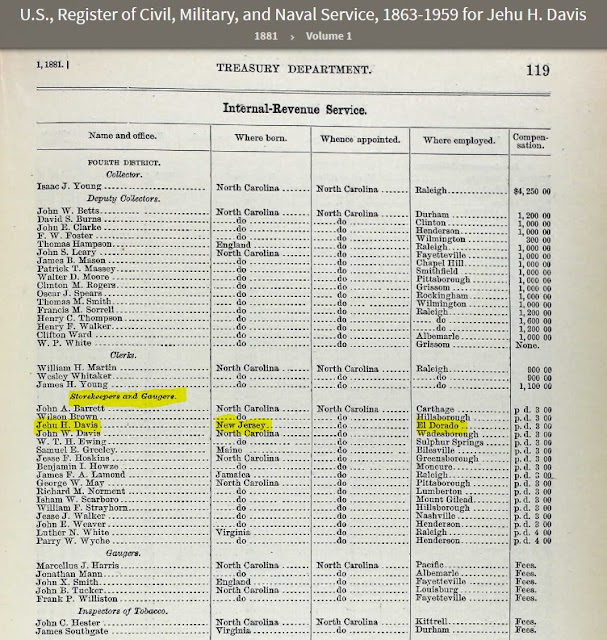 On 6 Jan 1900 James Tucker, husband of Jane Morgan Tucker, was found dead, lying in the road about three miles from his home. His cause of death was unknown. 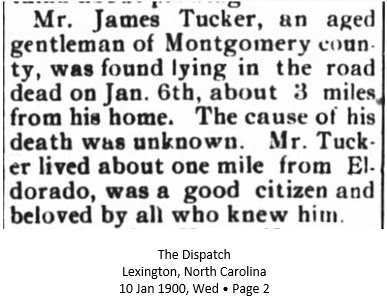 The 1900 Census shows Jane Tucker, a widow, age 66, running a boarding house with several boarders. Some of her children live close by.

Jane Morgan Tucker died in Jan 1905 and is buried in the Henderson Family Cemetery in Eldorado, North Carolina, alongside her husband, James Tucker. 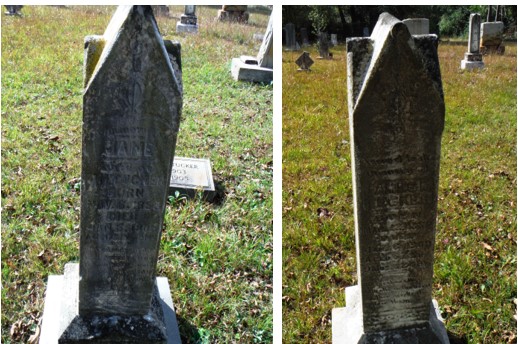 Posted by Uwharrie Roots at 4:40 PM