In the 126-page estate file of Henry Delamothe, located at Family Search, the first document in the folder is a summons to the sheriff of Montgomery County to take the bodies of John Morris, this John may be my third great grandfather, or it could be his son, John Jr, George Washington Morris, my third great uncle, and Nelson Harris, to have these three men at the court house in Lawrenceville on the last Monday in February 1844 to answer John C. Atkins, executor of Henry Delamothe Dec’d, of a plea of covenants broken to his damage $50. 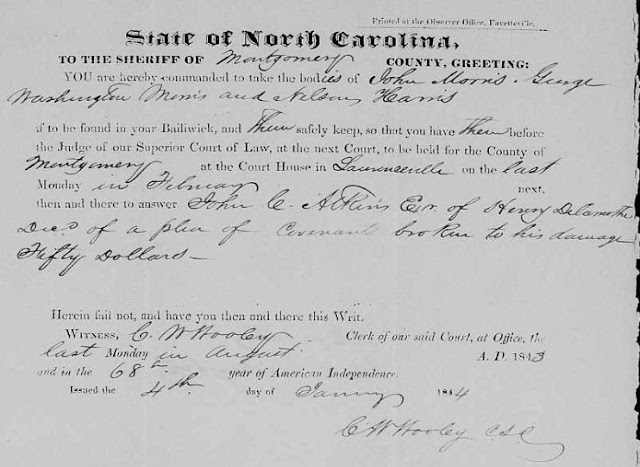 Nelson Harris, the son of William Harris, was born about 1810 and died in 1857. He married Nancy Ingram in 1845, sister to Abigale Ingram, who married Nelson’s brother, Parsons Harris. Of interest, Grandison Morris, brother to George Washington Morris mentioned in the document, named his son, Parsons Harris Morris, who later, in 1870, became the Register of Deeds for Montgomery County, a position which he held for many years. It is obvious, based on the document, as well as, the fact that a son was named after one of them, that Nelson and Parsons Harris had a relationship with at least two members of my Morris family, Grandison and George. What kind and how close that relationship was, I hope to find out. 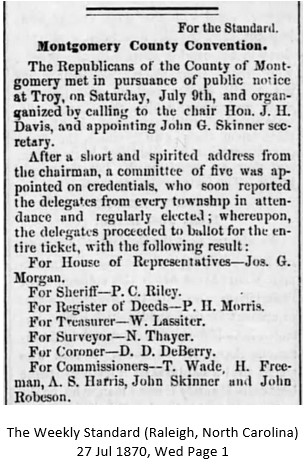 On page 40 of the estate file is found a rental agreement between John Morris Jr, Nelson Harris and John Atkins, the executor of Henry Delamothe. John Jr rented, from Jan 1843 to Jan 1844, the houses and plantation whereon the said J. Morris now lives, for $10. The rental agreement has a clause that the houses and plantation shall not be abused in any way nor is the timber to be cut except such as may be necessary to fence the plantation and for fire wood. The testator was Francis J. Kron, the doctor who migrated from Prussia, and the nephew-in-law to Henry Delamothe. 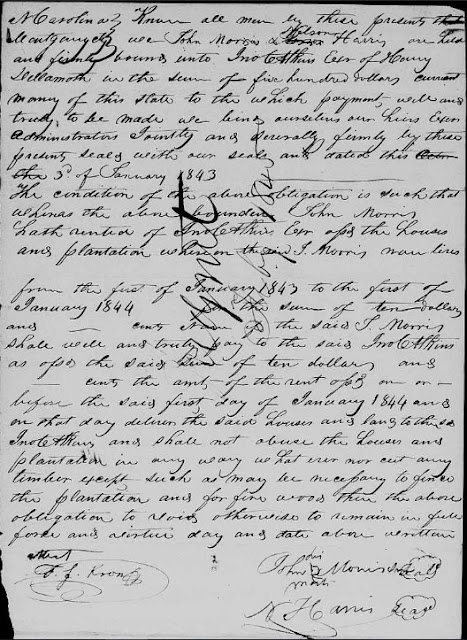 On page 42 of the Henry Delamothe estate file is a rental agreement between John Morris, Washington Morris and Nelson Harris dated 28 Oct 1840. The rental agreement is for John Morris to rent of John Atkins executor of Henry Delamothe, the house and plantation whereon John Morris now lives called the John Bell land, for twelve months from Jan 1841 to Jan 1842 for the sum of $15. As the document states that John Morris now lives on this land, it is assumed that John probably had lived on the land the previous year as well and most likely rented the land from year to year, although, I do not know what year John first lived on the John Bell land. The same terms apply as before, that the house and plantation shall not be abused in any way and no shade trees about the house shall be cut or timber in the woods shall be cut except what may be needed for fencing or for firewood. 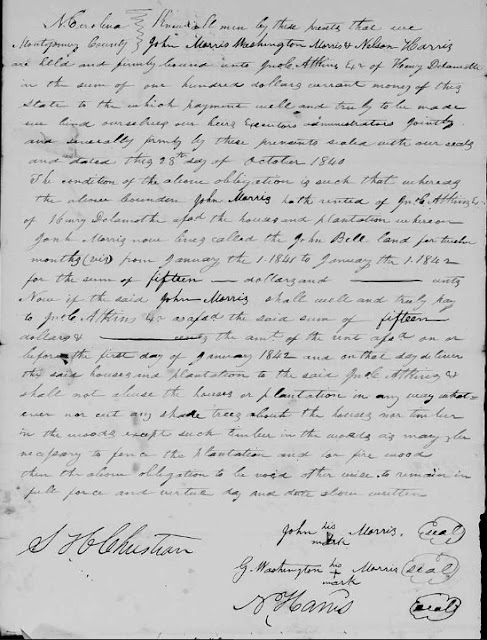 Now, both John Morris Sr and John Morris Jr are listed as miners on every Census past 1850, so, they probably would not have been a tenant farmer on the John Bell land, relying on crops for their lively hood. Most likely, enough crops and livestock were raised to feed the immediate family and the home that was leased from Henry Delamothe was just that, a home and nothing more. The rent paid would assist Henry Delamothe with additional income to pay property taxes on the land.

John Bell, no doubt is related to, and probably the son of, Joseph Bell, who was born about 1732, migrating to Anson County around 1773; per land grant info, he settled in those parts that became Montgomery in 1779. Joseph lived near the mouth of Cedar Creek on the west bank of the (Uwharrie) River, at the foot of the (Buck?) Mountain. His name appears on a petition in 1777 to divide Anson to form Montgomery and by 1790, he, and his sons, Richard, David, John and Benjamin, all born prior to 1774, show up on the Montgomery County Census. Joseph is said to have died about 1818 in Henderson, Montgomery County, North Carolina. I have yet to find his estate file, although I have seen references made to it, and I am sure upon Joseph’s death, and perhaps even before, he divided his land among his lawful heirs.

It is said by some that Joseph is the progenitor of all the Bell’s in this area, however, Land Grants were issued to William Bell and Thomas Bell in 1752 and 1753, some 20 years before Joseph Bell entered his first land grant in Anson County in 1773. More research is required to determine if there is a connection between these Bell men. William and Thomas lived on the Broad River, current day York County, South Carolina, while Joseph lived on the Uwharrie River, current day Montgomery County, North Carolina. So, just because these men have the same last name, and lived at one time, in the same county (Anson), does not necessarily mean there is any close relationship, or any relationship at all. Boundary lines changed very quickly back then, genealogy and geography go hand in hand. 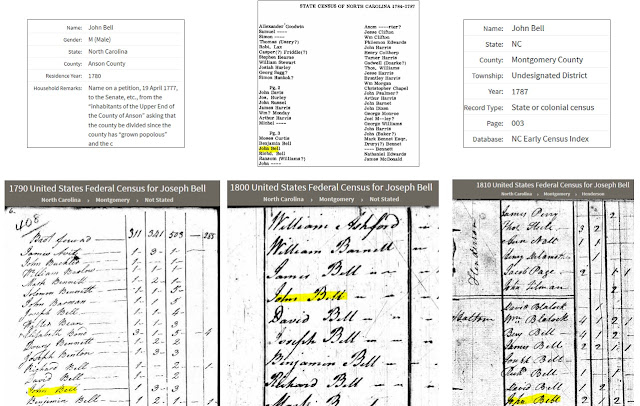 John’s office in Fayetteville was used to process payments for officers and soldiers who had served in the continental army and had claims for pay arrearages. I’m sure he charged a fee for his services. David Allison, the Assignee of John Porterfield, and many others, was caught up in several scandalous lawsuits over his lifetime, as well as the lifetime of his heirs. 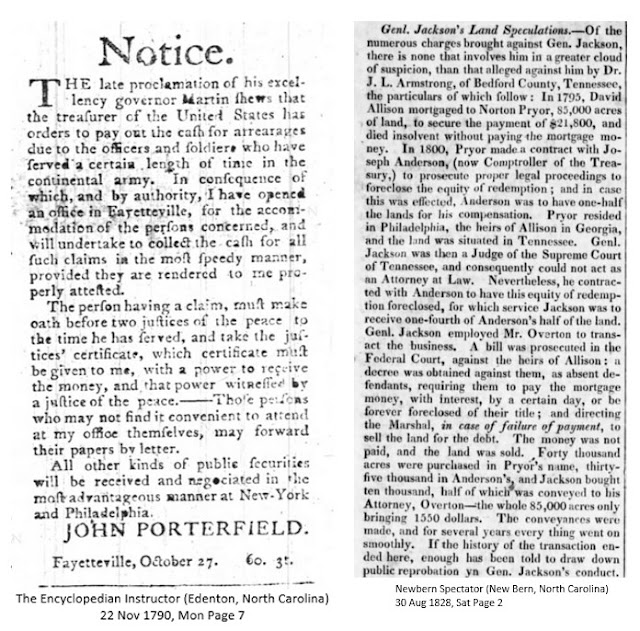 I am not able to find any record of John Bell after his 1819 land grant. I can only assume that he died between 1820 (that Census being destroyed) and 1830 as he is not found on a Census record. It is unfortunate that early Montgomery County land records were also destroyed. Researchers can only use what records remain for the county to try and piece together events in those early days.

At some point after 1819, I think it is possible that Henry Delamothe bought the John Bell land. Henry, at some point, began renting the plantation and my Morris ancestors rented the land. I now have more documentation to include to my timeline for my Morris ancestors, as well as, timelines of Henry Delamothe and John Bell and other Bell family members.

In my next post I will refer to Richard Bell, the brother of John Bell and how, while researching the Bell family I have once again been brought back full circle to the Morgan family – I can’t seem to stay away from them, even if I try!
Posted by Uwharrie Roots at 11:46 PM