Cranford vs Morris…the story of Charlie and Annie

I love reading through old court files at the archives in Raleigh or online at Family Search. Supreme Court files usually offer a plethora of information that can tie families together, as was the case when I discovered who the real parents of Willis Morgan are, or can certainly offer colorful details about a family. Several months ago, I discovered such a case concerning the killing of a hog by my first cousin three times removed, John Thomas Morris. I am just now getting around to writing about it.

John is the son of William Morris and Margaret Lewis of Montgomery County, North Carolina. He was born in 1859, just prior to the Civil War, known as the Antebellum Era, at a time when North Carolina was coming out of what became known as a “Rip Van Winkle” condition due to the states under development.

Constitutional reforms of 1835 paved the way for a quarter-century of development in the state that led to the building of railroads and plank roads; support for a public school system; the establishment of institutions for the care of the blind, deaf, and mentally ill; reformed tax system; changes in the legal status of women; the improvement of agricultural and manufacturing conditions; and the growth of the University of North Carolina and other colleges, academies, and religious agencies. (https://www.ncpedia.org/rip-van-winkle-state)

In September of 1889, John was 30 years old. He had married Caroline Hall, daughter of Murrill (sometimes seen as Merrill) and Susannah Tuner Hall, several years earlier, on 1 Jan 1882, at the home of his first cousin, Joseph Morris, in Uwharrie Township. The Hall’s, as previously noted in other posts, are inner-connected in some way to the Morgan and Beckerdite families and have connections to Randolph County, NC to the Kearns and Steed families. I am slowly working my way through this web of mazes to fully understand the intricate details.

Joseph Morris is my second great uncle, the son of Thomas and Mary Williams Morris. He married Margaret Rosina Merritt, the daughter of John and Deborah Sanders Merritt, who happen to serve as my maternal third great grandparents, in 1877. I made mention of John and Deborah in my post, Temperance Morris, wife of Jacob Sanders, and a Blog about the Merritt’s is forthcoming...someday. 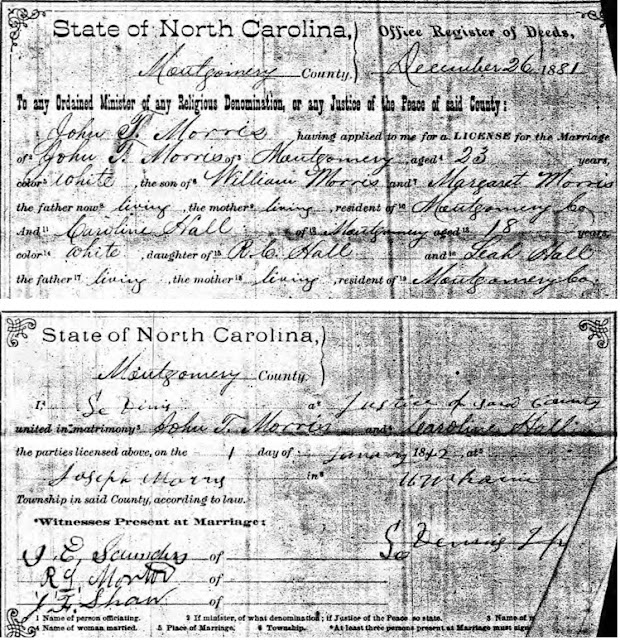 So, it was on the day of John’s sixth wedding anniversary, 1 Jan 1888, that he was accused of unlawfully maiming and killing a hog inside an enclosure, and not surrounded by a lawful fence, that evidently belonged to the man that would in the future become his oldest son, Charlie’s, father-in-law. But, John did not know that at the time. John plead not guilty. 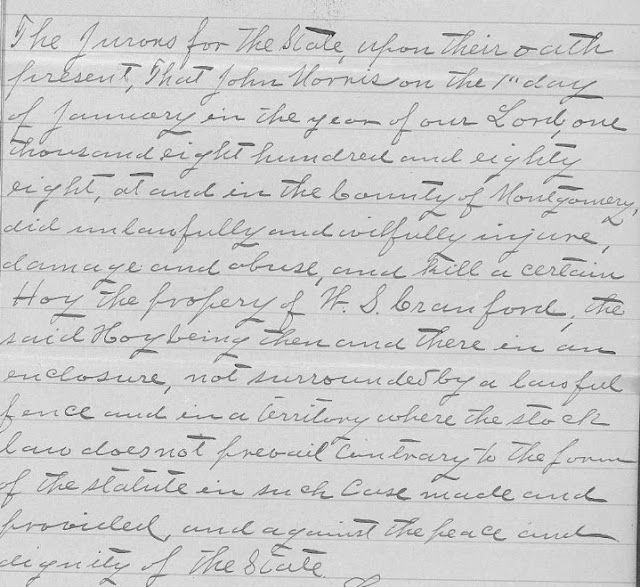 The charges were that John shot and killed a hog, the property of William Stokes Cranford, noted as W.S. in the court papers, near the residence of John’s father, William, whose farm was within what was called a neighborhood enclosure or fence, but not a stock law fence, as was Cranford’s farm, and many others, within the same fence, the farms separated by a creek over which stock could easily pass. 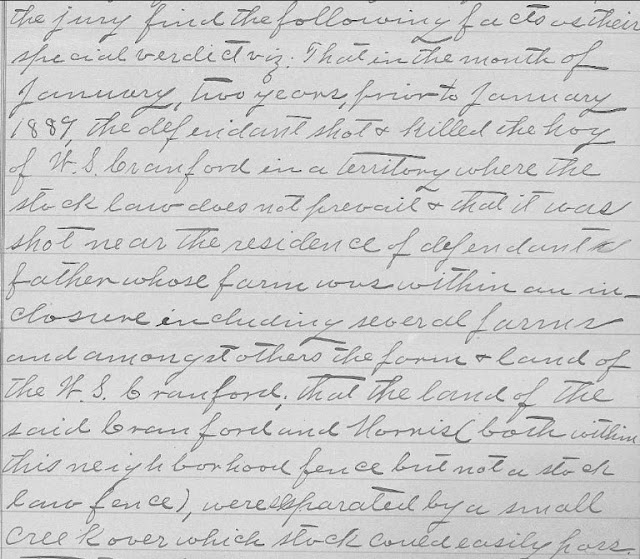 The Grand Jury, only calling two of the four witnesses, William Stokes Cranford and George Henderson, as the other two witnesses were not summoned, the case was continued to the fall session for the want of evidence. 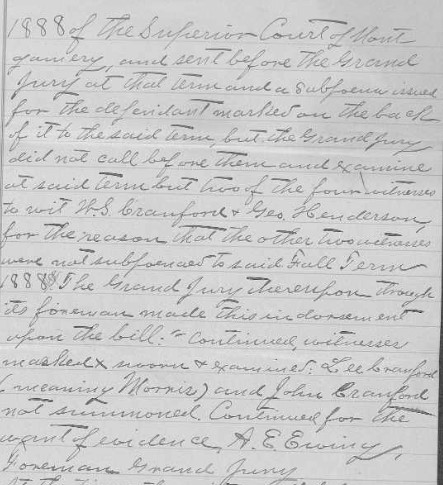 Again, at the fall session, the case was continued as the grand jury made no presentment of the case. The bill was again sent to the grand jury at the Spring term of court in 1889, but the court believed the statute of limitations had expired, and John was found not guilty by the lower court. Therefore, the state appealed to the Supreme Court. 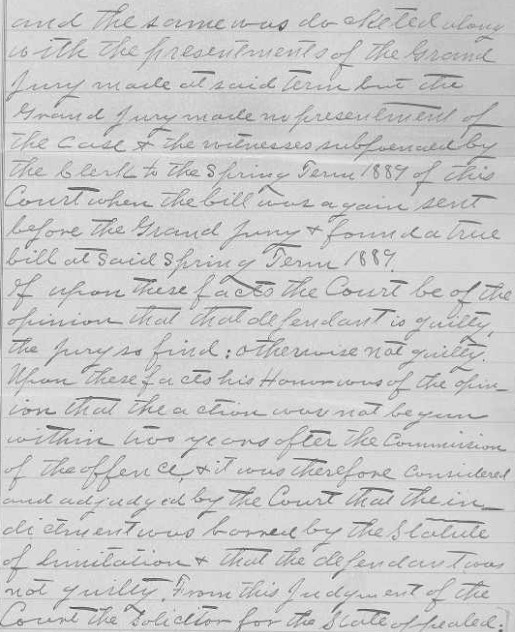 Unfortunately, the remainder of the file has been lost to history and I will never know if John was, or was not, found guilty of killing the hog of William Stokes Cranford in an enclosure.

What I do know is that, in an ironic twist of fate, John’s oldest son, Charlie, grew up to marry Annie Cranford, the oldest daughter of William Stokes Cranford and Mary (Fannie) Morris in Aug 1904. 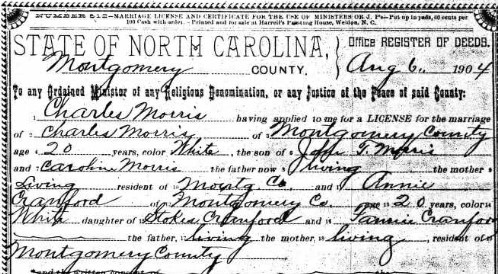 William Stokes Cranford was, according to his death certificate, born in Montgomery County on 22 Sep 1854 to Richard and Adaline Hurley Cranford. I have not done much research on the Cranford or Hurley lines, but these surnames are in my family tree and I will, someday, find the time to thoroughly research these families. I do know there is a Y-DNA project for the Cranford surname at Family Tree DNA. William married Mary Frances Morris in 1878. 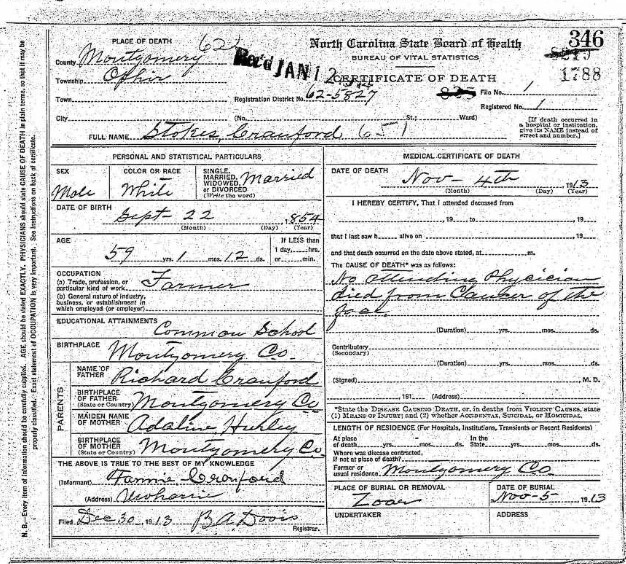 Charlie and Annie Cranford Morris made their home in the Uwharrie area of Montgomery County. In 1910, the newly married couple reside next door to Charlie’s parents and showing that two children have been born to this marriage, but only one is now living.

The 1920 Census provides some tantalizing details on the families of Montgomery County. The Census taker provided the name of the road where the family dwelling was located. The Morris’s and the Harris’s lived on River Road in Uwharrie Township. That road still exists today, running parallel to the Yadkin and Pee Dee River between Hwy 24/27 and Hwy 109.

The Tucker’s lived on what was then called Lowder Ferry Road. That road no longer exists on maps today that I can find. In fact, all mentions of the road are referred to as on the Stanly side of the river.

Lowder’s Ferry was located on the west bank of the Yadkin, across from the Yadkin’s confluence with the Uwharrie River. From the Montgomery side of the river, I would guess that the road would be located directly across the river from the Morrow Mountain boat launch, near the end of Morrow Mountain Road.

In speaking with the grandson of Milas Tucker, he remembers his grandfather living at the end of Morton Road and there being a ferry at or near the end of that road called Lowder's Ferry. 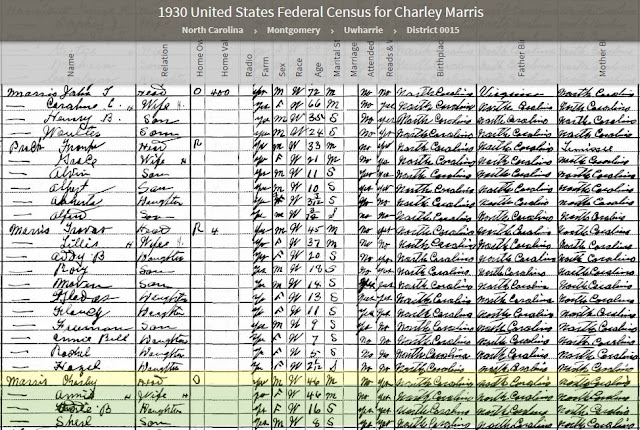 Between 1930 and 1935, Charlie and Annie move to Eldorado, the community next to Uwharrie. On this Census, the question is asked, “Residence city in 1935?” and Charlie answered, “Same house.” So, I know he moved from Uwharrie to Eldorado between 1930, when he is listed as living in Uwharrie, and 1935 as he stated he had been in the same house for five years, on the 1940 Census. Charlie, listed in previous Census’ as working in the Lumber Mill, now shows he is a Logger, working in the saw mill industry.

By 1950, a tool and die maker in Troy, NC, by the name of Hugh Clark, invents a device to speed up log sawing. Charlie Morris, a log turner, is shown in the Newspaper demonstrating how the device works. 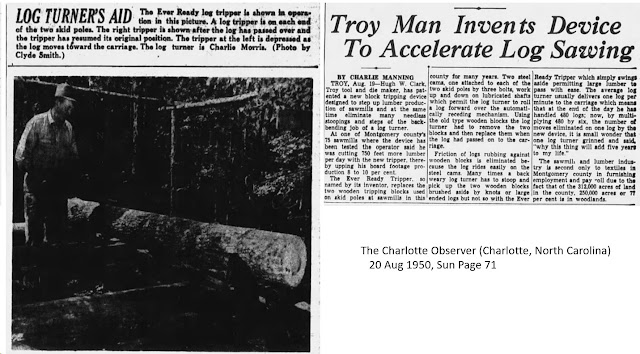 Charlie and Annie remained in the Uwharrie area of Montgomery County their entire lives. Both died in the mid-1970s around 90 years of age and are buried at Uwharrie United Methodist Church Cemetery in Uwharrie Township.

Posted by Uwharrie Roots at 3:34 PM