McDonald was the youngest son of Lucian and Clementine Marks, born on September 9, 1887 in Chatham County, NC. As a child he played sandlot baseball with Paul Green.

As an aside note, Paul Green is a Pulitzer playwright best known for his historical dramas of life in North Carolina during the first decades of the twentieth century. To get a flavor of the speech and attitudes of the time, read Green’s book “Home to my Valley”.

It seems that Lucian wasted no time seeing that his children received an education. The 1898 rolls for Buies Creek Academy list Donald (age 12) as one of their students.

McDonald married Lina Eetelle Reardon on July 14, 1907 in Neills Creek, NC. She was the daughter of John Randerson Reardon and Emma D Ryals. She was born May 3, 1889 in Harnett County, NC.

Lucian had past in 1904 and Clementine in 1907 and although he was the youngest son, he ended up with the family farm. Dorothy Marks (his granddaughter) said he would have liked to go off and do some of the exciting things his siblings had done, but he held to many responsibilities. Actually looking back at his life one would feel he had much to be proud of.

He wore many hats in the community, a deacon at the Baptist Church, town clerk, property renter and business partner in a pharmacy with J. Campbell, he counted out the pills and accompanied Doc Joe McKay in his buggy on some of the calls (Doc Joe took over his father’s practice in 1885 and retired in 1935).

He performed experiments for the state on seed and plants. They were advertised in the “The Progressive Farmer” and sold up and down the eastern seaboard. One year he had a run of bad luck, with hail destroying the plants, which was not insured that year.

They had to return the money that was sent in from the advertisement. He was the first to introduce tobacco into the area and was the first one to own a car.

Cecil would bring home some of his college professors for dinner and the family was very proud of their company. They would wear a new suit from Walter Marks store and have a wonderful meal. One story that has been told is when one of the professors came over; the family went to a store in Dunn (probably Sims’s) and brought back new silverware for the meal. It was said; Herman held up his knife and exclaimed he didn’t know which side to use.

McDonald was a friend of Dr. Campbell, and helped him at the start Campbell University. When Dr. James A. Campbell died March 19, 1934 at age 72, services were held at the auditorium of the college. Being a deacon of the Baptist church McDonald was one of the honorary pallbearers.

By the 1900 census, Neills Creek Township, Harnett County, NC
We find that Clementine has had ten children in all, but only six survived. Four children are in the household: Leola (25), Elmond E (17), Joseph E (14) and McDonald (12). We see that everyone can read and write and the three boys are attending school. Lucian owns his farm free and clear of mortgage.

The family said several children are buried in the Marks family cemetery on the farm. As I mentioned in my last blog, several of the stones were plowed under along with their names and dates.

1910 Census for Duke, Harnett Co., NC for Don Marks
He along with his brother Joe and family rent a house on 41 J Street. Don is a laborer in a cotton mill and has been married for two years and has one son, Cecil (2).
Joe is married to Minnie and is a machinist in the cotton mill. They have two children: Eldridge (4) and Hortense (2). All the adults can read and write.

The Erwin Cotton Mill Number 2
The following quotes are from mill worker Joe Johns:
“They bought land in the 1890s and the mill was up and running by 1903. They built a big mill and a power plant and a brick mill. They built the churches, a hospital, houses for folks. They owned the railroad, too. We had our own icehouse, our own cotton gin, blacksmith shop. And in town, everybody had a garden. I mean a big garden. Out on the edge of town, the mill owned all the land and if you wanted a bigger garden, you could have your bigger place down just 4 or 5 blocks away. A lot of folks would raise hogs and the hog pens were all on the edge of town too”.

“They didn't just work in the mill. The mill provided us with a swimming pool, tennis courts, a bowling alley, even started a theater”.

“Lots of times, you'd have folks who, back in the early days, worked on the farm all their life. That farming life was tough. They'd have a family in town that they knew, and they'd come in and live with them because the person in town here had a steady job, where the guy on the farm did not”.
“Cotton was hand-picked in the fall of the year. Then the farmer would take it to the gin and you'd see a line of trucks and mules and wagons here to the mill. Cotton was weighed and sold right here, and they'd end up weaving it and selling it. We made more denim cloth than any place in the world”.
“I'll never forget that mill whistle either. You had your "wake whistle." That was an hour or more before you started work, then when the "work whistle" sounded everything started humming. Most of the time, folks got used to it and never even heard it. It was just part of the scenery”.

It doesn’t appear that Dan was at the mill for very long. The family members I spoke made no mention of this. In 1915 he was on the Tax List for Neills Creek, showing he had real and personal property valued at $476.00 and taxed $5.93.

WWI
On 6 April 1917, the United States declared war on Germany and officially entered World War I. Six weeks later, on 18 May 1917, the Selective Service Act was passed, which authorized the president to increase the military establishment of the United States. As a result, every male living within the United States between the ages of eighteen and forty-five was required to register for the draft. Of course, not all the men who registered actually served in the armed forces.

There is no indication that he actually served, but does provide us some information. He is living on Lillington R 1, is married with four children. He was described as having gray eyes, light hair and medium build. Although family members say he had blue eyes, brown hair and a receding hairline (which probably happened later on). 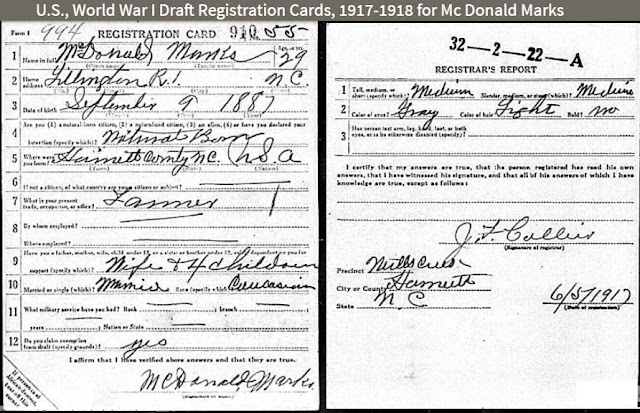 McDonald’s oldest son, Cecil and his bride of six months Virgie were living next door. Cecil listed himself as a farmer.

Cecil is still a farmer and lives next door to his mother and he now has three daughters: Peggie Joyce (6), Dorothy (3) and Virginia (2 mos).

Health Issues
McDonald developed Bright’s disease (also known as nephritis), which involves chronic inflammation of the kidneys. Clementine and Herman Marks were also afflicted with the disease.
Family members said when comparing McDonald’s signature from 1903 and 1905, it is was obvious something was amiss. The first signature flows and is clear, the second shows signs of motor control problems. 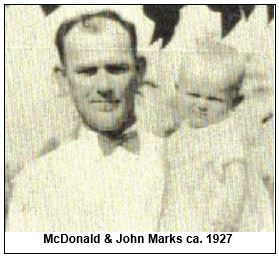 In 1934 complications set in when he received a spider bite, which was treated with lithium, which also affects the kidneys. The cure was almost as bad as the ailment and he died within 24 hours of having been bitten. Doc McKay stayed with him through the night, McDonald said he heard music and saw his father. Some said he wasn’t logical, but other said he couldn’t have been more rational.

The family never got over his death, in fact Stacey always spoke of him as if he were still there. Buck who was only 8 never stopped missing him. He developed a close bond with his sister Stacey and after coming back form WWII Buck never missed a Christmas at the home. 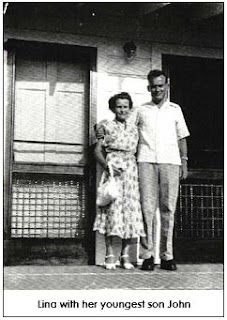 On August 6, 1951, Lina sold 32.2 acres of land to her son-in-law and daughter, Horace E. & Stacey Johnson, leaving 3.7 acres. This property was located in Neills Creek Township is noted as J. H. Reardon Land, the deeds office noted that this would be an indicator of the original landowners. It is approximately one mile SE from the town limits of Buies Creek on a private road about 300 feet from US Highway 421 between Buies Creek and Dunn, before Old Stage Road. The land now owned by R.D. Lee Farms, Inc. and is still used for farming of cotton and asparagus. It’s interesting to note on the location map pin pointing this property, it noted the area as Marks Land.


Marks Reunion
One story June told us with such vividness that it almost pulled you back in time, was that family reunion of McDonald’s family back in the early 1950’s. She was only a child then, but has very special memories of that time. Everyone was so happy to get together and one could feel the love in the air. The children were outside playing all day. Playing so hard that they were all dirty before it was over. The adults were taking pictures to hold the memories of this day and someone would play the piano. They had a wonderful evening meal and as always would have storytelling at the table. Afterwards, the men would go out on the front porch to talk and the children would play until dark. At this time everyone would pack up the cars and head off. It would be so quiet, June said, she was so wound up with the excitement of the day, it was difficult to settle down to sleep. 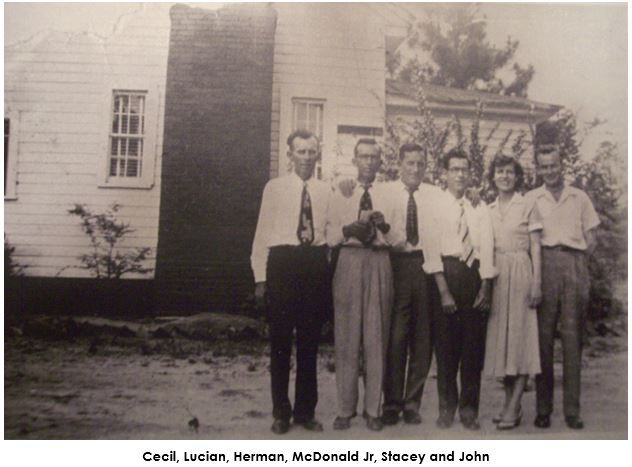 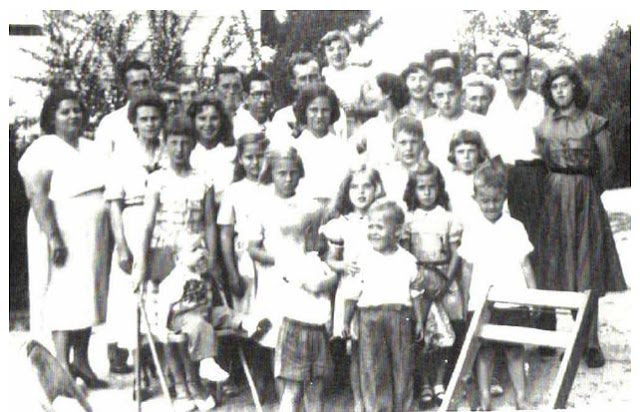 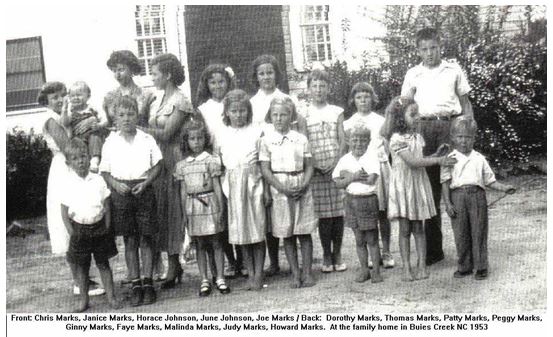 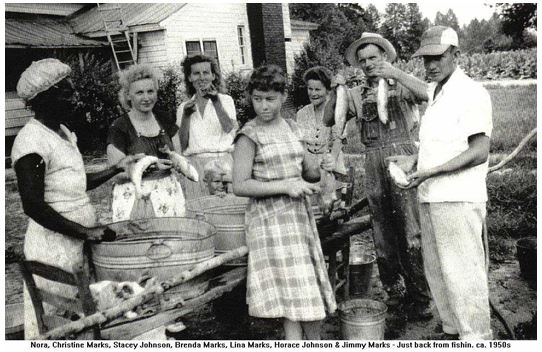 The Family Homestead
In August of 1951, Lina sold 32.2 acres of land to her son-in-law and daughter, Horace & Stacey Johnson, leaving 3.7 acres. This property is noted as J. H. Reardon Land, the deeds office noted that this would be an indicator of the original landowners. The land now owned by R. D. Lee Farms, Inc. and is still used for farming.

It’s interesting to note on the location map pin pointing this property, the area is called Marks Land. They sold off the house and a small piece of land to Jonnie Lee and farmed the rest. June Lackey lamented that they have allowed the house run down and wished they had been able buy it.
Doc McKay had quite a sizable amount of land, which butted up to the east side of McDonald’s property. Lantz said their house is situated on the site of one of Doc’s slave cabins. Something they looked back at with some amusement was that a trip to Raleigh back then was a whole day’s travel one way. Now with cars, people commute to work there every day.

Lina died from a heart attack on Sept. 4, 1962 at Duke University Hospital in Durham, NC and was buried next to her husband in Buies Creek Cemetery in Lillington. 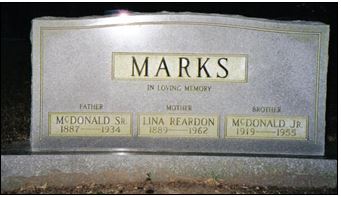 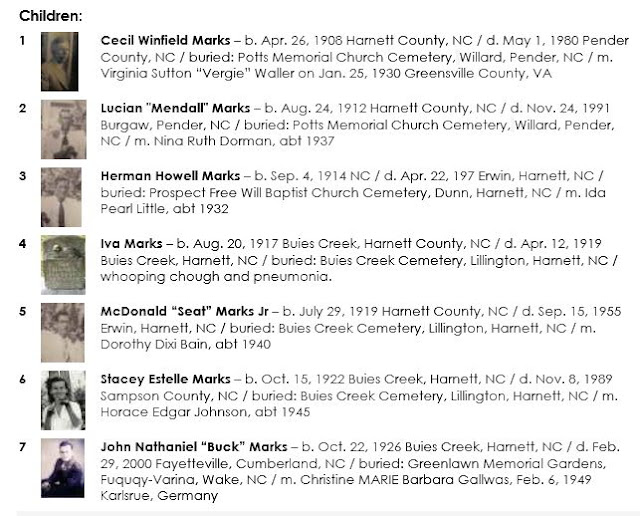 Posted by Uwharrie Roots at 3:22 PM