If you have been following along with this Blog, you will recall back in Oct 2017, I made mention of Mary Marks in my King of Uwharrie post. For a very long time I wondered who she was and if she really did exist or if her mention was, perhaps, a prank pulled by her brothers, Edward and Tom, on the Census taker. For a while, I really put my focus on Mary and tried to find any slither of information on her that I could.

It was not until I began the Uwharrie Roots Blog that I ran across a document that, finally, proved Mary Marks was a real human being. While writing the King of Uwharrie post, I discovered that Mary Marks signed as a witness to her brother, Tom Marks’, marriage to Barbara Lefler, on 26 Jan 1876, at the residence of their father, William Buck Marks, in Eldorado Township, Montgomery County, North Carolina. Unfortunately, I still had no idea, at that time, who the Mary was that signed as a witness, or how she related to my Marks family. 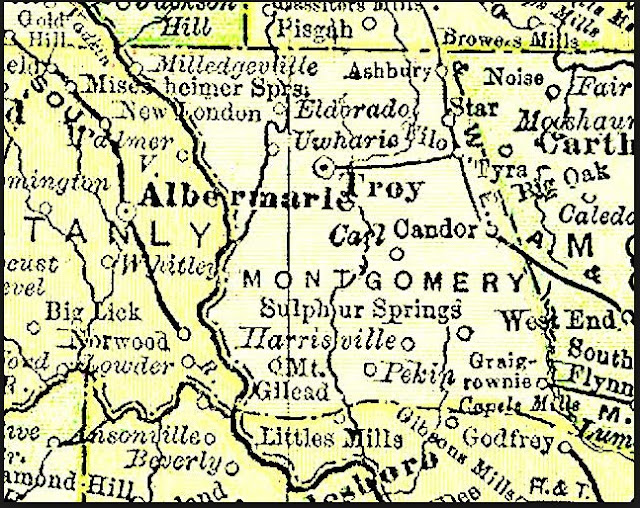 After weeks of research, I put Mary aside as I was not able to find any information on her. I went on to help a newfound cousin research his Tucker line. The Tucker’s are another family with Uwharrie Roots and I was happy to learn about them. As with anything new, one must familiarize oneself. I began hunting down the Tucker families in Montgomery and Stanly and surrounding areas and putting their families together. I was in the process of researching marriage records for a Lavina Tucker when I stumbled upon Mary Marks, quite by accident. To my surprise, the person I had spent months looking for was listed in the Montgomery County Marriage Register directly above Lavina Tucker.

Genealogy tip for the day: you never know what you will find when researching other lines – so pay close attention! 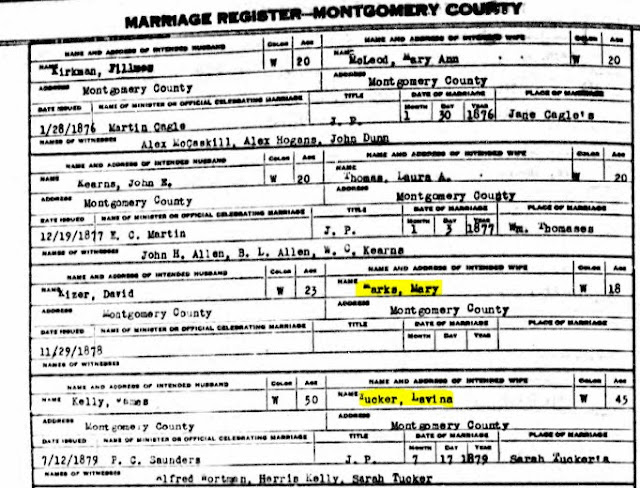 However, according to the 1880 Census, Mary, now married to David Kizer for about two years and living across the river in Furr Township, Stanly County, is listed as age 18. David and Mary have no children.

Further proof that her age was incorrectly listed on the 1870 Census can be found in the Montgomery County Marriage Register. David, age 23 and Mary, age 18, were married 29 Nov 1878, making Mary born in 1860.

Lastly, Mary’s death certificate states she is 67 years old in 1928, when she died, making her birth year 1861. It is my belief that Mary was most likely born around Jul 1861, about one year after the 1860 Census was enumerated. Thus the reason she is not found on the 1860 Census and is most likely 8 or 9 years old on the 1870 Census. She is not found with her mother, Leah Marks, in 1880 as she married in 1878, two years before that Census was taken. 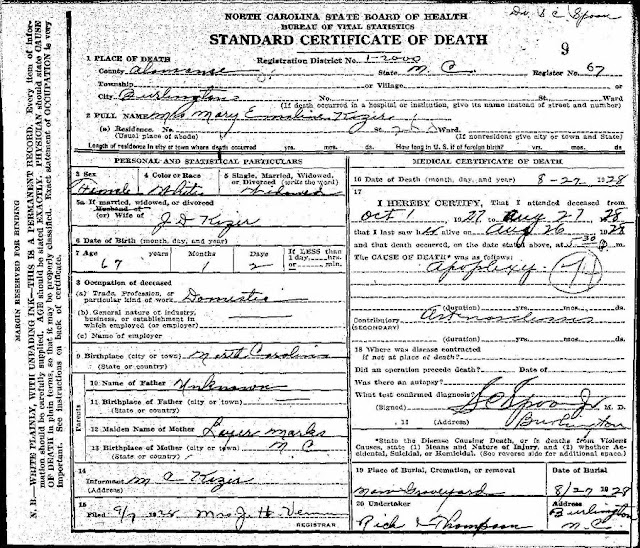 According to the Montgomery County Marriage Register, David Kizer and Mary Marks were married on 29 Nov 1878 but I found a newspaper article dated 31 Jul 1879 announcing the Kiser, Marks wedding. Someone with a sense of humor, who probably knew David and Mary, wrote the poem for them. 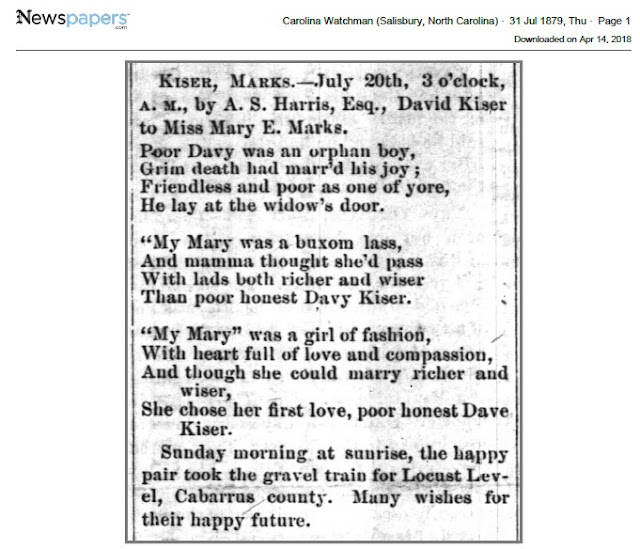 I am not sure what to make of the poem as it seems to allude that David was an ‘orphan,’ that ‘death’ had taken away his joy and he was ‘at the widow’s door.’ I cannot help but wonder if the ‘death’ that had taken away the joy of the wedding was Mary’s father, William Buck Marks, and the widow was Leah Marks, Mary’s mother. We do know that Leah Caroline Fesperman Marks is listed on the 1880 Census as a widow.

The year 1900 finds David (going by his first name, James) and Mary Marks Kizer, in, of all places, Gulf, Chatham County. Seven children have been born between the years 1883 and 1900. James (David) Kizer and his oldest son, Charlie, have a listed occupation as Fireman Stationary Engineer and Marshall, the second oldest, is listed as Farm Labor.

I had to look up what a Fireman Stationary Engineer was. According to census.gov, there were two classes of jobs and Census takers were instructed to distinguish between the two job classes. One class was a boiler operator and mostly worked in the many Industrial Mills that were popping up all over the country. These jobs were to be listed as ‘Stationary.’ The second class of jobs were Fireman Locomotive Engineers and these jobs were to be listed as locomotive engineer or locomotive fireman. As with so many other families of this era, people were on the move looking for work. They moved wherever work could be found. Farming had become outdated after the Civil War.

The Kizer family, listed as farmers on the 1880 Census, had moved from Stanly County to Chatham County between 1880 and 1900 to, most likely, find work. Somewhere along the way, David had acquired a skill to work on boilers and was able to land a job in this field; his oldest son looks to have also acquired the same skill.

Looks like the job was a dangerous one too!


Gulf, Chatham County, sits just about 7 miles west of Cumnock, once Chatham, now Lee County, North Carolina, where, in 1895, a huge mine explosion killed Charlie Poe, husband of Sarah Hamilton. Sarah is the daughter of Lee Thomas and Julia Marks Hamilton. I wrote about Sarah and her horrific life in my blog Sarah Ann Hamilton...daughter of Julia Ann Marks Hamilton

It would seem that David and Mary Marks Kizer might have been in Gulf at the time of the Cumnock explosion. 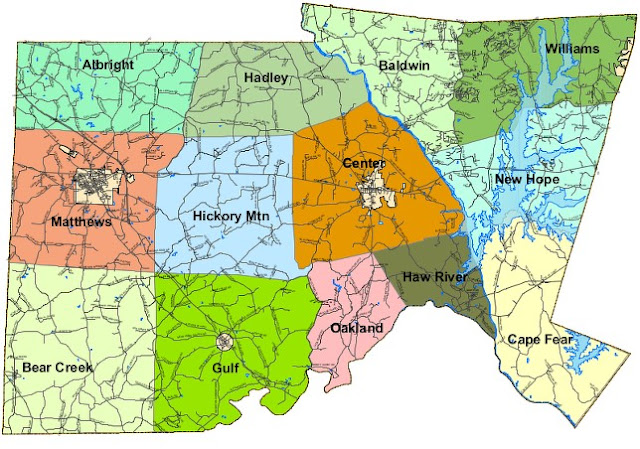 The year 1910 finds David and Mary Marks Kizer and family in Alamance County, Haw River Township. Charlie Kizer, the oldest, looks to not be living in his parent’s home. Marshall, Mary Bertie, Medina, William (Willis), and Robert are still at home. Ida Johnson Kizer is the wife of Marshall and their children, Ernest and Gurnie are listed as grandchildren to David Kizer.

Nora Emeline Kizer, seen on the 1900 Census as age 5 months would passed away in Haw River in 1901 and is buried at Haw River City Cemetery. 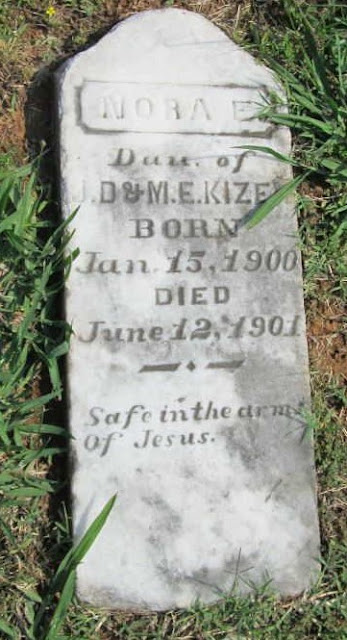 The year 1920 shows that most of the children are grown and have left home; some have not gone too far. Marshall and Ida Johnson Kizer live next door to David and Mary and have added a daughter, Ruthie, to their family. 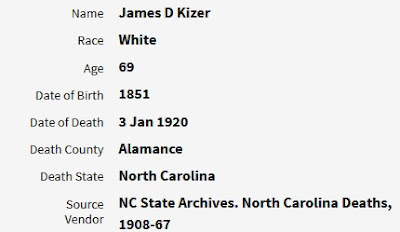 After the death of her husband, David, Mary Emeline Marks Kizer would move to Danville, VA with her sons, Robert and William. Mary’s sister, Cyrona Marks Hamilton would die in 1922. Cyrona’s death notice ran in The Concord Daily Tribune and noted that Mary lived in Danville, VA and Julia Marks Hamilton, living in Swepsonville, North Carolina, would die three months later. Lee and Julia Marks Hamilton had probably already moved back to Eldorado as Julia died there and was buried at Lanes Chapel in Blaine, North Carolina. 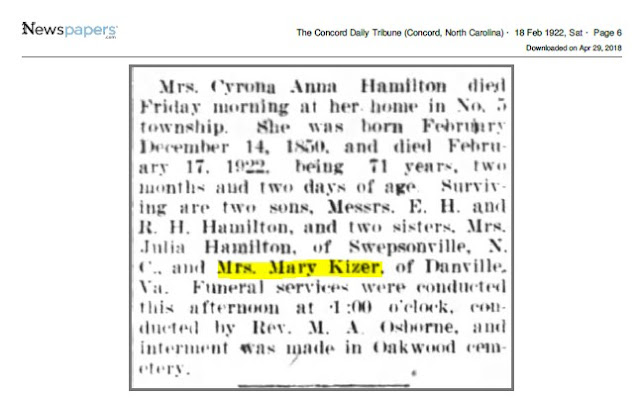 The only documentation I am able to find on Robert and William being in Virginia is their marriage licenses. In 1923, William married Carrie Bright in Pittsylvania, VA, about 16 miles north of Danville. In 1915, Robert married Minnie Pearl Mitchell in Danville, VA. Minnie died in 1916 from Puerperal Eclampsia, with a contributing cause of Nephritis. Minnie was only 18 years old. 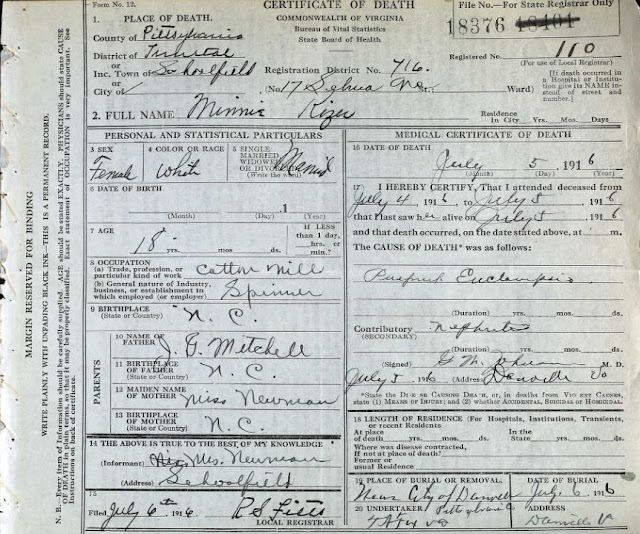 Mary is my third great Aunt and the daughter of William Buck Marks and Leah Caroline Fesperman. 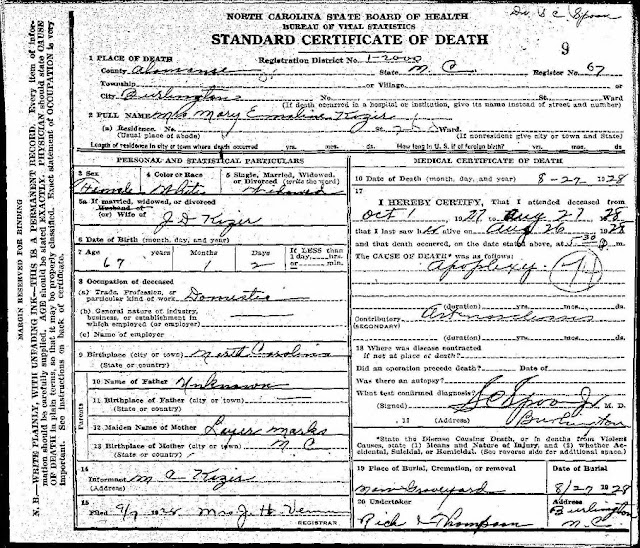 Posted by Uwharrie Roots at 9:05 AM