Who's your daddy, William 'Buck' Marks?

Be sure to read the Blog I found your daddy, William Buck Marks

I've heard the story so many times now that I can repeat it in my sleep. William "Buck" Marks came from Chatham County into Montgomery County, on the Stanly County side, in the early 1800's. Legend says that he was hired to teach the Michael Fesperman children to read and write. Instead, he ran off with Michael Fesperman's  daughter, Leah Caroline, against her father's wishes, moved to the Uwharrie area of Montgomery County, where they had at least five children, and he died sometime before 1880. Leah was disowned and left only $5 in her father's will.

William ‘Buck’ Marks, my 3rd great-grandfather, seems to have left the county as mysteriously as he came in because there is not so much as a grave stone to place a flower on that I can find! This man magically showed up in Montgomery County, NC in 1850, swept his 'student' Leah off her feet, fathered five children, and then magically left or died sometime before the 1880 Census was taken.

The 20th day of Sept, 1850 is where I first find mention of my illusive 3rd great-grandparents, William ‘Buck’ Marks and Leah Caroline Fesperman. They are living in Montgomery County, NC and even though the Census taker, E.W. Woody forgot to write in the area, I know it is most likely near Eldorado because that is where most all the Marks’ lived. William is a shoemaker (not a teacher), 50 years old, born in NC about the year 1800, and he is listed as able to read and write.

Note: I do find it ironic that Leah, listed as age 27, born about 1823 in NC, cannot read or write, (that’s what the little mark / is for) since that is the reason William Marks was hired by Michael Fesperman in the first place, according to family legend. But, I digress.

At this point, I have learned that William and Leah have been together for at least 1 year and 9 months as they have a 1 year old daughter; Jane R. William is 23 years older than Leah. I have never found a marriage license. I do find it hard to believe that William, being 50, has never been married and has no children. It is also hard to accept that Leah at age 27 is not yet married with children of her own.

When I look at the ages of the other families living around William and Leah they all are between 25 and 50 and have been married with several children for several, if not many, years - not any different than today, I suppose. So, how does one get to be 50 and 27 and never married in the year 1850? It seems unheard of. And why would a father (Michael Fesperman) hire a 50 year old man to teach his 20-something year old daughter to read and write?

So many questions, not enough answers. It is why I have started this Blog. To, hopefully, get some answers. Taking my family legend to heart and giving the benefit of the doubt that William Marks was indeed hired by Michael Fesperman to educate his children, and that he is from Chatham County, NC (so many variables...) AND that he was an educator, I begin my search on the history of Chatham County schools between 1820 and 1850 in hopes of finding a listing of the first teachers in the county. Surely, if he taught in the first school houses of the state there would be a record for him. 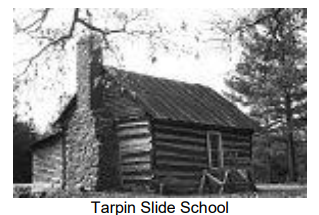 Chatham’s first and best-known academy was the Pittsborough Academy, established by state charter in 1787, about the time William Marks was born, with the name persisting into the twentieth century. Other academies were begun at Haywood (1818), Rock Rest (1828, moved to Pittsborough in 1831 and called Kelvin), Tick Creek (1832, later Caldwell), Pleasant Hill (1838), and Cobia’s Select Female School (1839) near Pittsboro. [A Brief History of the Schools of Chatham County by Jane Pyle 2009]

The first public free school in North Carolina was opened on January 20, 1840 in Rockingham County. The school's first teacher was George W. Garrett, a large plantation owner who had gone to school at a military academy in Virginia. Mr. Garrett provided the land and the building for the first free school, with the agreement that he would be the teacher. Unfortunately, I can find no listing of the counties first school teachers so I am unable to verify the family legend on this route so, I move on to other sources.

Find a Grave is a great way to locate ancestors if you have a name. Of course, the database is only as good as the information that is loaded into it but I had to try a search. I found a William Thomas Marks in Chatham County whose occupation is listed as teacher on Find-a-Grave. But, this William was born in 1861 (Chatham County) and died in 1918 (Lee County). This William was too young to be my William being born 61 years too late. 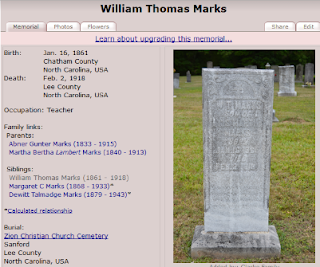 William the teacher's father is listed as Abner Gunter Marks (1833-1915) and I see Abner's father is listed as William Marks from Chatham County (1807-1880), married to Sarah Gunter (1811-1895), Chatham County. Now, this William Marks would meet the criteria for my William except that he is already married, with children; and his wife did not die until 1895. 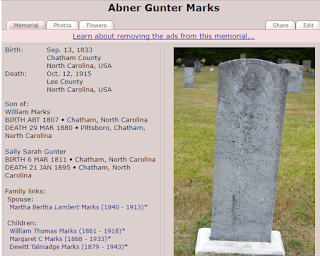 Chatham County is a good 60 miles from Montgomery County by today’s road system and even further from Stanly County. Travel would have been difficult between the two counties in the years 1850 (when my William showed up on the Montgomery County Census) and 1870, the last Census he can be found on. I do not imagine that folks made the trip a lot, if ever.  It was difficult enough just getting across the county to go to the court house to do your legal business. 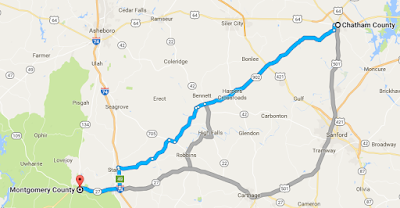 For now though, back to Montgomery County and my William Marks.

The 1860 Census finds William and Leah in the Fork (Eldorado) community of Montgomery County. William is listed as age 65, born abt. 1795 (5 years older than the last Census). He is still a shoemaker and his personal estate is valued at $40 ($1126 in current money). It seems William has lost the ability to read and write over the last 10 years as the 1850 Census states that he can read and write. Leah is listed as age 37, born abt. 1823. That sounds about right. She still claims she is unable to read or write. Jane R is now 11 years old and has 2 sisters and 2 brothers and those old enough are attending school. All were born in NC.

The majority of their neighbors are listed as farmers with the last name Talbert. Two other families are also listed, Pierce (or maybe Purce) family are directly next door to William and Leah and are from Virginia. Hamblin (Hamlin) and Mary, age 75 and 67. The Levi Talbert family is directly on the other side.

I went back to the 1850 Census and rechecked the names of the neighbors as I did not recall the name Pierce or Purce listed. As suspected, the Pierce or Purce family is not listed on the 1850 Census. I tried to find out more about this family but am at a dead end. They seem to be new to town in 1860; a bit odd considering their age. Could Mary be William's sister? More research on this family is needed.

In 1850, at dwelling 654, also from Virginia, are John and Amelia Morris (also my ancestors and more on them in another blog). Perhaps the Pierce (or Purce) family are related to the Morris?

I have determined that William Marks was not a teacher, even though he may have claimed to be one. I have now turned my research to Shoemakers in Montgomery County, NC in the years 1850 and 1860; if William Marks did make shoes who bought them? Where did he purchase his materials from?  Was a receipt ever written out for the payment of shoes or items purchased to make shoes?

Montgomery County lists only 3 shoemakers on the 1850 Census and one retailer.

As William Marks was born about 1800 he would have learned how to make shoes the original way - by hand. The industrial age had not yet begun. He may have had a shop on his property or perhaps owned a shop in town. Perhaps he worked for someone else or had others work for him. Perhaps he trained the 2 younger men, John Lacky and Guilford Warbritton, in the art of shoe-making. Perhaps he sold his shoes to Thomas Atkins who is listed as a Retailer who could have resold them to the public.

Since I enjoy learning about new things, and I know nothing of how shoes were made in the early 1800s I wanted to see what I could find out. A good place to learn about how shoes were made before the industrial age (or anything else done back in the day) is Colonial Williamsburg, Virginia. I visited there in 2008 and learned a lot about the life of our ancestors – how they lived, what they ate, what they wore, etc. and found it fascinating. It is true that necessity is the mother of invention. 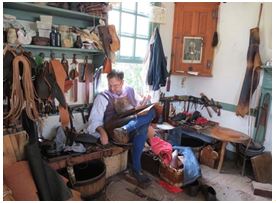 Originally, a shoemaker (sometimes called cordwainers) made shoes one pair at a time. For most of history, shoe-making had been a handcraft, meaning it is time consuming and all done by hand. Traditional shoemakers used more than 15 different techniques of making shoes. I will spare you the next 10 paragraphs on shoes. (www.colonialwilliamsburg.com) 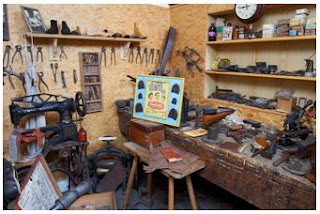 By the mid-1800's the sewing machine was invented and was being used for shoe-making; did William have to learn how to make shoes all over again? By the end of the 19th century (1800's), shoe-making was no longer a traditional handicraft. Shoe-making had been mostly mechanized, with production occurring in large factories and shoes being stored in large warehouses waiting to be sold. Textile mills were popping up everywhere and people were flocking to them for work.

1870 finds the Marks family still in the Eldorado community of Montgomery County, NC. However, there are two new names listed. Mary, age 18 and Martha, age 15.  Where are the two boys, Edward, who is 15 by now and Thomas who is 12? Jane and Cyrona are also missing. Perhaps these are the two girls just going by their middle names?  Once again, I am stumped and will have to dig deeper to find out who these girls are and what happened to the four missing children. 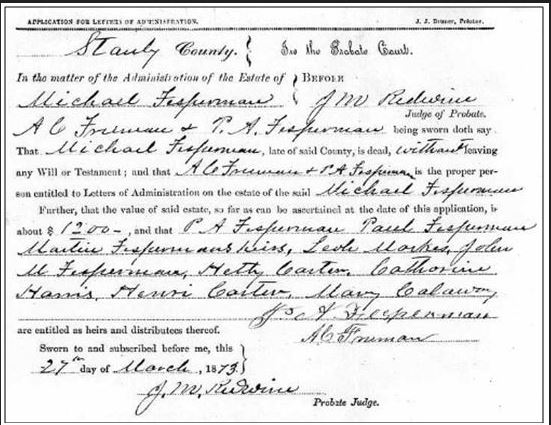 There, written in the court document, is Leah Marks, my 3rd great-grandmother, along with all her brothers and sisters, listed as rightful heirs to their father's estate. It would seem that the entire family had not disowned Leah. Her brothers and sisters had included her for an equal share and not just the $5 her father had left her in his handwritten will.

As far as I know William and Leah Fesperman Marks exited this life as mysteriously as they entered it - with little or no documentation about them. By the 1880 Census Leah is 58 and found living next to the Clay Morgan family in the Eldorado community of Montgomery County. Leah, now going by her middle name Caroline, is listed as widowed. William ‘Buck; Marks died sometime between the 1870 and 1880 Census.

I still don't know much about my 3rd great-grandparents, William and Leah Marks - but that is what this Blog is about - my hope is to, eventually connect to others who may have information that can help solve this puzzle.

The search continues...and a good place to start is with each of the Marks children.
Posted by Uwharrie Roots at 3:17 PM