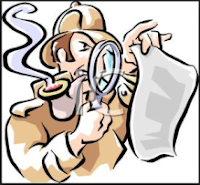 Once you eliminate the impossible, whatever remains, no matter how improbable, must be the truth. -Arthur Conan Doyle

Searching for ancestors can lead to insanity if one is not willing to accept the truth once it is found. Sometimes, that truth is ugly and sometimes it is sweet. Either way, it is the truth and must be accepted as such. I have been on the hunt for my great-great-great-grandfather, William 'Buck' Marks, for quite some time now, but, it has only been in the past month that I have really focused one hundred percent of my attention on him and his family.

William Marks seems to have mysteriously dropped into Montgomery County, NC just as mysteriously as he left the place. There is no birth record, no death record, not even a grave to lay a flower upon. Granted, the court house in Montgomery County, NC burned down in 1835, and again in 1840, and many records were lost. But, by 1850 the good people of Montgomery County seemed to have figured out what the problem was and corrected it; so, records of my 3rd great grandparents should exist since it wasn't until close to 1850 that we find them together. At least that is the logical conclusion.

My hunt for William 'Buck' Marks has taken a very wide turn and I am now researching the Marks of Stanly, Chatham and Richmond Counties in North Carolina. There will be many more Blogs to come in regards to what I find. For now I am focusing my attention on the children of William and Leah.

The first child that we show a record for is Jane R. She shows up on the 1850 Montgomery County, NC Census. I am not sure what area of Montgomery County they are living in, as the 1850 Census does not say, but I imagine it is the Eldorado community as that is pretty much the same area where my Marks family has resided up to this day. William and Leah have been together for more than a year as Jane R is shown to be 1 year old.


Jane shows up again on the 1860 Census as 11 years old but disappears as magically as her father can by 1870.

However, there are two new names showing on the 1870 Census, Mary, 18 and Martha, 15. Both are listed with the last name Marks. I have my own theory about who Mary and Martha are and will be writing another Blog about them in the future. But, for now, back to Jane R.


I have two theories I am chasing on Jane.

Theory # 1 is that Jane died between the 1860 and 1870 Census of some dreaded disease that always seemed to afflict our ancestors and any clue of her death was destroyed by some happenstance, like flooding the area to build a lake. However, I am not able to find that there was a dreaded disease outbreak during that time or that there was another happenstance in the county at that time. I also had no good fortune in locating a grave for an 11 to 20 year old Jane R. She could perhaps be buried in an unmarked grave at Prospect Baptist Church on River Road, near the Eldorado community. It is believed that William and Leah are buried there in unmarked graves.


So, I went back to the 1870 Census and sure enough, there was Lindsay and Jane with two little boys, Alexander, age 2 and Zebulon, age 6 months, living right down the road from William and Leah in Eldorado, Montgomery County.

Tracking them now became easy - it usually is when you have names. Mrs. Abie Hanes Davis is Abigal Loflin and is shown living with her parents on the 1880 Census in Rockford, Surry, North Carolina, United States. Alexander and Zebulon (Zeb) are right where they should be and we find more children as well. I won't spend time in this Blog researching the Loflin children as I am only interested right now in the children of William Marks. But, at some time in the future, I will find out more on each of the Loflin children and attempt to track down their descendants.


There is a possible third theory on Jane. It is not mine, but a family member who noticed this one. On the 1870 Census there is a Jane listed living with S.H. Hamilton. The age for Jane is correct and there is a strong possibility that this could also be our Jane R. More research must be done to either prove or disprove this third theory.


I have not as yet been able to pin down Jane's entire story. While looking for her grave I could only find a Rebecca Jane Loflin at findagrave.com. However, the person who did this research has Jane married to Burrell Loflin. I did search for Burrell Loflin and Jane Marks but found nothing other than this posting at findagrave.com.


I'll continue to search for Jane R. Marks - she is out there somewhere and she does have her own story to be told. Hopefully, someday, I will be able to tell it...