John Chisholm is the son of Murdock and Mary Chisholm. He was born about 1776 in Scotland. He came to America with his parents and siblings before 1780, most likely following the path that many Scots did, arriving in Wilmington, North Carolina and making their way up the Cape Fear River to Cross Creek, now Fayetteville, and then migrating to Richmond County and later to Montgomery County.

John married Elizabeth Stanback, daughter of Thomas and Mary Jennings Stanback, a prominent family in the area. Elizabeth died 20 Jul 1817 and John, shortly after, in Oct 1818. Both are buried on Luther Mountain, just west of Harrisville, Montgomery County, North Carolina. 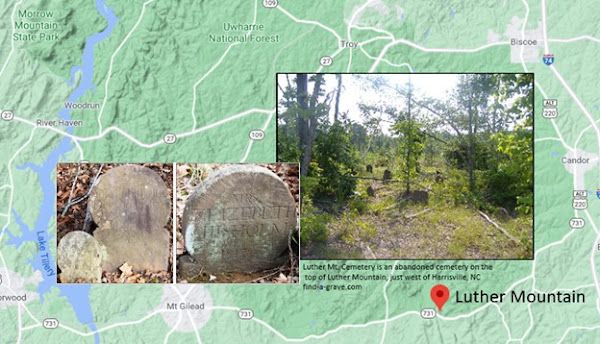 Adaline Chisholm was 10 months old when she died and could possibly be the child of John and Elizabeth who died young. M.P. Chisholm and S.P. Chisholm may have also been children at the time of their deaths. I have not been to this cemetery yet but hope to at some future date. I am told by those who have visited this cemetery that John Chisholm (age 42) is buried next to Elizabeth Chisholm.

Based on the dates of death, 1816 – 1818, most of these people probably died of some epidemic that was ravaging through the area at that time. In a Newspaper article published in the Weekly Raleigh Register, Raleigh, North Carolina, 10 May 1816, is found the obituary of Ralph Gorrell Esq, who died “of the prevailing Epidemic.” In years to come, the daughter of John and Elizabeth Stanback Chisholm, will marry the grandson of Ralph Gorrell Esq.

Later in the file, at the time of distribution, we find out that Anguish (Angus) Chisholm, the brother of John Chisholm Dec’d, is the guardian of Calvin Chisholm and Mary Chisholm. 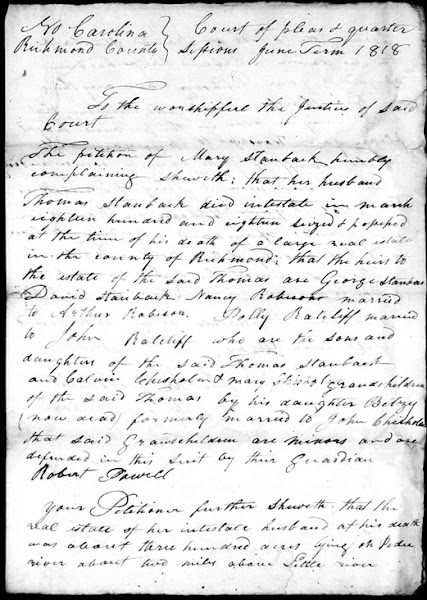 However, of interest, Mask’s Ferry still looked to be in operation in 1811 and was still known as Mask’s Ferry, as it is noted in a newspaper article “Roads from McFarland’s Turnpike” in the Weekly Raleigh Register. 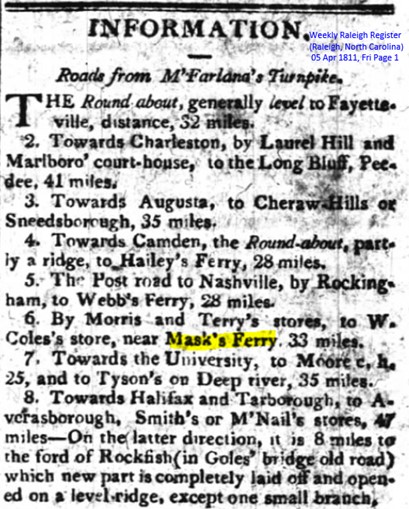 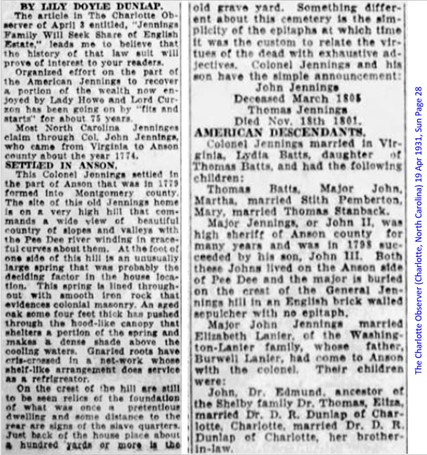 Thomas Stanback married second to Mary Morehead daughter of Joseph and Elizabeth Turner Morehead. Joseph Morehead came from Scotland and landed at Charleston, South Carolina. He made his way up the Pee Dee River and settled near Blewitt’s Falls in Richmond County, North Carolina. He married Betsy Tanner, but record nor tradition survives to tell us the date or place of their marriage. His 1806 will named his heirs as: James, Joseph, John (father of North Carolina Gov. John Motely Morehead), Charlie, Turner, Keran, Elizabeth, Sarah, Mary (second wife of Thomas Stanback), and Nancy (Ann).

Some of the Morehead family eventually made their way to Rockingham County, where in 1821, Ann Eliza Lindsay married John Motley Morehead, the nephew of Mary Morehead Stanback. Later, the couple moved to Guilford County. The Lindsay’s were associated with a resettlement group of two-dozen or so families who arrived in the area around 1753. The group was known as the “Nottingham colony” and originated from the Nottingham Presbyterian Settlement area near the border between Pennsylvania and Maryland. The family’s patriarch was Robert Lindsay, Sr. (c.1735-1801). (https://preservationgreensboro.org/the-elusive-mrs-morehead/)

I wrote about the Lindsay family in my blog post Crump v. Morgan

I do not know where Mary or her brother Calvin grew up. Possibly in the home of their uncle, Angus, but I think it is more likely, due to the future connections in Guilford County to the Gorrell and Kerr families, that they lived in the home of their grandfather, Thomas Stanback and, after his death in 1818, Calvin and Mary continued to live with their step-grandmother, Mary Morehead Stanback, who did not die until 1836.

The 1830 Census for Richmond County, North Carolina was enumerated on 28 Jun 1830 and shows Mary Morehead Stanback, age between 50 & 60 and living in her household is a female between age 20 & 30 who could be Mary Jennings Chisholm. Both Mary and Calvin, based on future records, look to have been well educated. 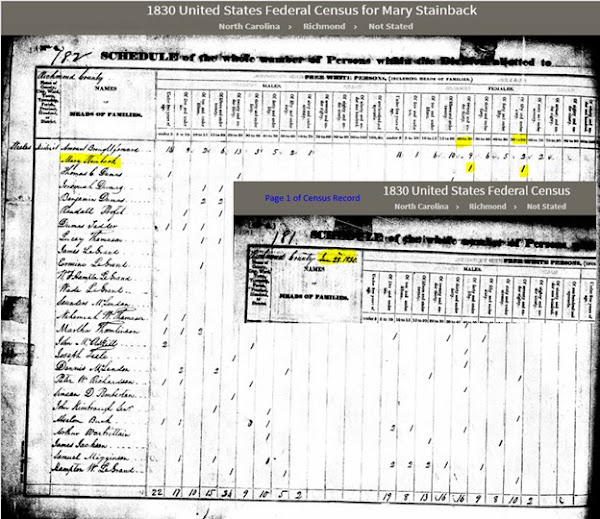 In Dec 1830, the wedding of Ralph Gorrell Esq. and Mary Jennings Chisholm is announced in the Weekly Raleigh Register. The couple wed in Mary’s hometown of Lawrenceville, Montgomery County.

From the website NC Pedia, Ralph Gorrell, lawyer, was the eldest son of David (1770–1848) and Euphemia Stewart Gorrell (1770–1850) of Guilford County. His grandfather was Ralph Gorrell, Esq. (1735–1816), who migrated from County Donegal, Ireland, to Boston in 1750, and thence to Guilford County where he settled near and became an active member of the Alamance Presbyterian Church.

As a side note, Ralph Gorrell Esq married Mary Kerr, daughter of David and Katherine Kerr. Mary had a brother named William Kerr.

Continuing from NC Pedia, like his grandfather, Ralph Gorrell developed an interest in politics. After graduation from Greensboro Academy in 1820 and The University of North Carolina in 1825, he was licensed to practice law in 1827. He ran for the House of Commons in 1832 but withdrew when he discovered that he was three acres under the constitutional property requirement of one hundred acres. He was elected to the House of Commons in 1834, 1835, and 1854. He also served Guilford County in the state senate in 1856 and 1858; there the minority party supported him for presiding officer.

As a lawyer and a businessman, Gorrell achieved a good reputation and moderate wealth. From 1830 to 1835 he organized a business partnership with William Kerr and Calvin J. Chisholm to operate mercantile houses in Greensboro and Morganton. In 1851, he became the first president of the Greensboro Mutual Life Insurance and Trust Company. Gorrell also owned a plantation—in 1860 he listed the value of his property at $46,000 (worth $1.4 million today). He also had a flourishing law practice.

Gorrell was a devoted husband and father. He married Mary Jennings Chisholm of Richmond County, North Carolina, but their lives were saddened by the deaths of seven of their ten children. One son, Captain Henry Clay Gorrell, died leading troops in the Civil War. Anne Eliza Gorrell, who married Joseph B. Fariss in 1869, was the only child to bear him grandchildren. 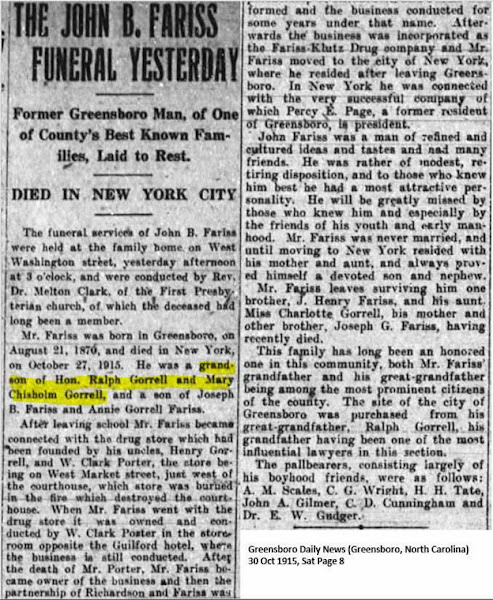 Gorrell was noted for holding daily family devotions after he joined the Presbyterian church in 1843. He became the ruling elder of his church in 1849 and was regularly called upon to represent it at meetings of the presbytery, synod, and general assembly.

From the website Carolana, historical records show that this staunch Presbyterian group “developed a democratic, individualistic, self-reliant society very different from that of the older, settled coastal regions.” They have been characterized as having three distinct loves: religion, democracy, and education. Many of the names of the early settlers are familiar names today, particularly, Gorrell, Hunter, and Lindsay.

In 1807, when the county seat of Guilford County was moved to a more central point, it was found to be on the land of Ralph Gorrell (grandfather of Ralph Gorrell, husband of Mary Jennings Chisholm Gorrell); and the following deed was drawn:

"Ralph Gorrell, Esq. to the Commissioners This Indenture made the Twenty fifth day of March in the year one thousand eight hundred & Eight Between Ralph Gorrell, Esq. of the County of Guilford & State of North Carolina of the one part & Charles Bruce, Hugh Forbis, Jacob Clap, Wm. Armfield, David Caldwell, [Jr.], George Swain, Nathan Mendenhall of the County & State afs. of the other part - Commissioners appointed by the Act of Assembly for the purchasing a Suitable Tract of Land at or Contiguous to the Center of Guilford County for Erecting a Town Court House Prison and Stocks & Such other publick uses as they may Deem Necessary thereon witnesseth that the S. Ralph Gorrell for and in Consideration of the Sum of Ninety Eight Dollars to him in hand paid by the Said Commissioners and Receipt whareof is hereby Acknowledged hath granted & by these presents Doth grant Bargain & Sell alien and Confirm unto the S. Commissioners all thate Tract Mesuage or Tenement of Land in Guilford County on the waters of Buffelow - Beginning at a Post Oak grub on the west Side of his land turning thence East Eighty four poles to a willow Oak thence North Eighty poles to a stake thence west Eighty four poles to a Post Oak grub on his west line thence along S. line to the first Station containing forty Two acres." (https://www.carolana.com/NC/Counties/guilford_county_nc.html)

Ralph and Mary Chisholm Gorrell's spacious home was a meeting place for preachers as well as lawyers and statesmen. It was there in 1865 that General Joseph E. Johnston delivered the last message to his troops before surrendering.

After Gorrell's death (1875), the Cape Fear and Yadkin Valley Railroad Company purchased his homeplace for its general offices. (https://www.ncpedia.org/biography/gorrell-ralph)

In Mar 1833, Calvin J. Chisholm, of the county of Burke (North Carolina), son of John and Elizabeth Stanback Chisholm, ordained Ralph Gorrell of the county of Guilford (North Carolina) as his true and lawful attorney to sell a tract of land in the county of Richmond adjoining the lands of David Stanback and Elizabeth Stanback on the Pee Dee River. On 27 Apr 1833, Duncan Kerr proved the execution of the power of attorney and it was ordered to be registered in Richmond County. 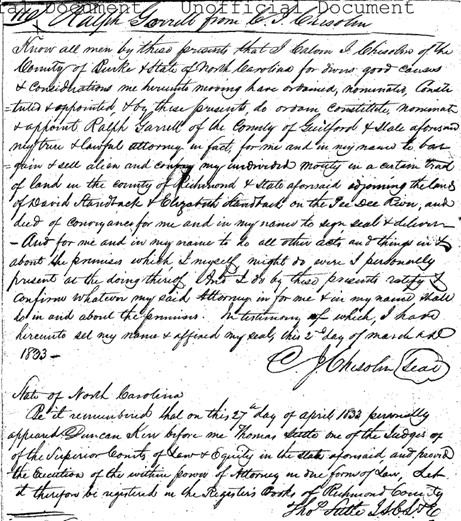 Within weeks of the power of attorney being granted, Ralph Gorrell sells to David Stanback, brother of Elizabeth Stanback Chisholm, on behalf of his brother-in-law, Calvin J. Chisholm, and his wife, Mary Jennings Chisholm Gorrell, for the sum of $1400, a tract of land in Richmond County on the Pee Dee River beginning at a poplar formerly Ratliff's corner on the river and runs to the Ferry Road up to the fork of the path that leads to the former mansion house of Thomas Stanback deceased, and with the old path, to the river road near the said house, to the corner of the heirs of George Stanback, on said road, to the bank of the river called Denson's beginnings, then down the course of the river to the beginning, containing 92 acres more or less. It being the interest of the aforesaid Calvin J. Chisholm and Mary J Gorrell in the lands of their grandfather Thomas Stanback, and the part laid off to them in the partition of the lands of said estate. 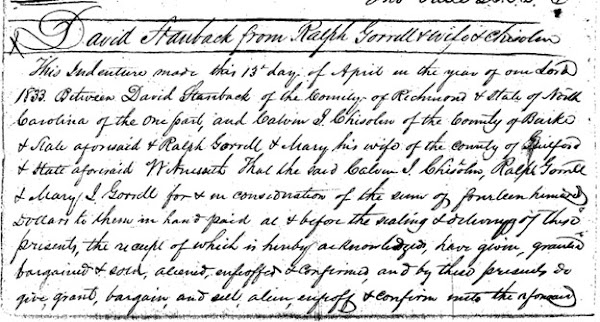 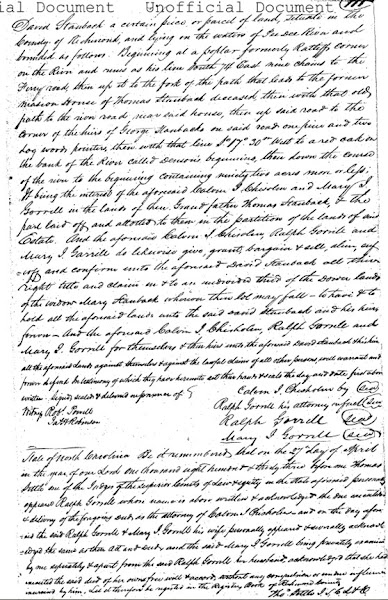 In an interesting weave of associations that could only have been brought together through the family of Mary Morehead Stanback, I found that Calvin J. Chisholm had business dealings with William Kerr, a man who settled and established a business in Greensboro, and evidently achieved some prominence in the community, as he served as Chairman of the Board of Commissioners in 1833. Ralph Gorrell, husband of Mary Jennings Chisholm Gorrell, became a business partner of Kerr’s about 1831.

The Greensboro History Museum houses letters that relate to the operation of William Kerr’s business in the early 1830s and one letter includes a lengthy discussion of Hugh Campbell’s partnership with Ralph Gorrell.

A folder includes Kerr’s correspondence (1831-33) from Col. C.J. Chisholm, a Morganton, NC, merchant with whom Kerr worked. Chisholm writes of the connection between his business and “court days,” and his letters also provide insight into life in the gold region of Western North Carolina.(https://archives.greensborohistory.org/manuscripts/kerr)

I have emailed the museum requesting copies of the letters and expect to hear back after the holidays. C. J. Chisholm was in Morganton, Burke County, North Carolina in 1832 selling wares he had obtained in Philadelphia and New York. 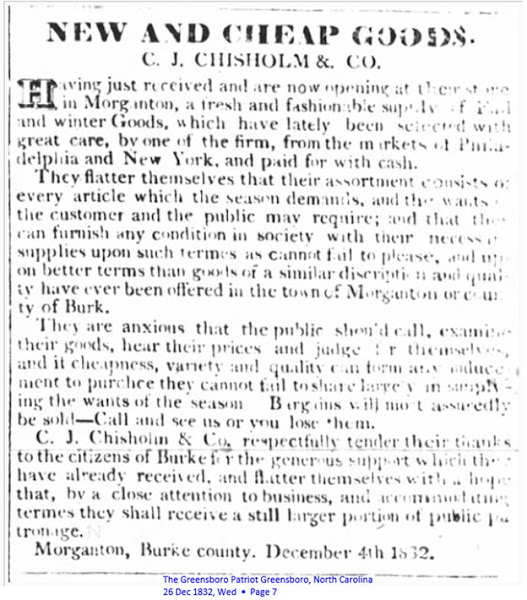 At a Rail Road Meeting in Nov 1833, the citizens of Burke County “convened at the Court House for the purpose of expressing their sense upon the various schemes of Internal Improvement proposed in the State” of North Carolina and for choosing delegates to the Convention in Raleigh. Four delegates were chosen, Colonel C. J. Chisholm being one of them. 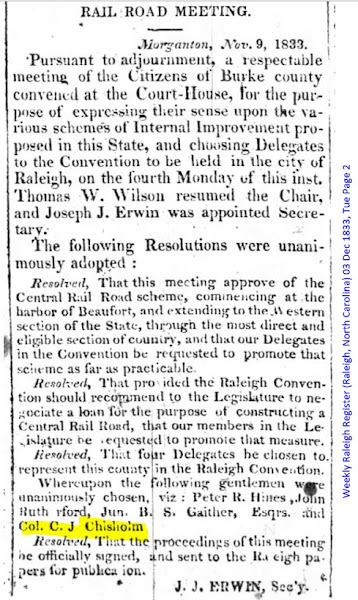 Stay tuned for the next blog on Malcom Chisholm, who came from Scotland to America in 1790 and with him brought a letter that I will share on the blog. This Malcom has been very confused with Malcom, son of Murdock, and I hope to clear up some of that confusion.

Posted by Uwharrie Roots at 2:31 PM