The 1949 William Wyler film, The Heiress, staring Olivia de Havilland as spinster daughter Catherine Sloper, reminds me of what my 3rd great-grandmother, Leah Caroline Fesperman, must have been like. Catherine, aka Olivia de Havilland, who, at the beginning of the movie, seems to have submitted to life’s cruel fate to make her a spinster, finally falls in love. Unfortunately, it’s with a man whom her father dislikes. Somewhere towards the end of the movie, Catherine, who has finally become tired of her father’s constant put downs towards her and the man she loves, reaches deep down inside herself and pulls out a tigress that has been hiding inside her since birth. In a fire storm of tongue lashes at her father after he threatens to disinherit her if she marries this man, Catherine whips out pen and paper and begins to write herself out of her father’s will. It is epic! And it is exactly what happened to my 3rd great-grandmother.

Leah Caroline Fesperman was the fourth child born to Michael and Leah Dry Fesperman about 1823 in what was then designated as Montgomery County, North Carolina. In 1841, about ten to twelve years before Leah meets her husband, William Marks, the land west of the Pee Dee River became Stanly County, North Carolina with Albemarle as the county seat. The land east of the Pee Dee River remained Montgomery County, North Carolina with Troy becoming the county seat. The Pee Dee River is literally the dividing point between the two counties. Both Leah Fesperman and William Marks lived on the west side of the river along what is now Valley Drive and near the current Morrow Mountain State Park. However, around 1848/9 they run away together across the river, to the community of Eldorado.

We first see Leah on the 1840 Census listed as age 15 thru 19 living in West Pee Dee River, Montgomery County, North Carolina. Up until 1850 Census takers were only allowed to take the name of the head of the family and all other family members were just counted as male/female within a certain age group. Fast forward to today and researches must guess who the family members were based on age. It is quite frustrating. You can see my guesses in the below screen capture.

Thus far, I have only been able to find the following family members for Leah Caroline. There are two unknowns listed on the 1840 Census and, at this time, I do not know who they are. They may have been a brother or sister who had died from some epidemic or was killed as a young person and the documents lost forever in the court house fire in the mid to late 1800's. Philip and Paul are not showing on the 1840 Census as living in their father’s house. Both are listed on separate Census’ as heads of their own houses. 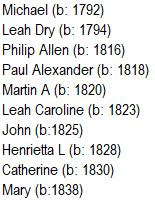 The Fesperman’s lived within a mile of Dr. Francis Joseph Kron who had migrated to America from Trier, Prussia and had settled in Montgomery County, North Carolina to make his living as the community physician. Dr. Kron lived in an area now known as Morrow Mountain (see above map) and he makes mention of Michael Fesperman in his journals dated 1835, saying, “The first inhabited plantation about a mile from my house, where one Michael Fesperman, a millwright and ingenious mechanician lives.”

In researching Michael Fesperman, (and I am nowhere done with finding tidbits of data on him) I have built a profile that tells me that he had his hand in so much that nothing he ever did could ever be fully accomplished. He was a very busy man, probably too busy. I will write more on him in the upcoming posts so; stay tuned for my Blog on the “Little Dutchman.”

Some refer to the period of time between 1830 to 1850 as the antebellum years, a Latin phrase meaning literally "before the war," while others refer to it as the Plantation era. Either way, this is the period that Leah Caroline grew up in. Her father, Michael Fesperman, as stated by Dr. Kron in his journal, was an ingenious millwright (mechanic). Leah’s family was most likely at the top end of upper middle class as her father still had to work to make a living but was probably paid very well for the work he performed. Leah probably grew up in a house similar to Dr. Kron’s, which can be seen today at Morrow Mountain State Park.

Family tradition says that Leah and William met when Michael Fesperman, Leah’s father, hired William Marks to educate his children. I have no proof that this is true and no proof that William Marks was an educator. Census records list him as a shoe maker and I only found on one Census where he claimed he could read and write. By 1845 the youngest of Leah’s siblings would have been Mary, 7, Catherine, 15, Henrietta, 17 and John, 20. Leah was 22 in 1845 and Martin would have been 25. Perhaps Mr. Fesperman hired William Marks to educate his younger daughters. Certainly, William and Leah would have seen one another if he was coming to the house to give lessons.

One thing though is for sure, they did meet and, defying her father, Leah left with William Marks. I imagine in a firestorm that Michael Fesperman never forgot because on the 11th day of March 1870, some 25 years after that fateful day he watched his daughter leave with William Marks, he wrote in his will the following:

By 1850 we find Leah living with William Marks in Montgomery County, North Carolina. She is 27 and he is 50. They have a one year old daughter, Jane R.


1860 finds the couple in the Fork (Eldorado) community with five children, three daughters and two sons.

The Marks’ family is still living in Eldorado in 1870. The two oldest daughters, Jane and Cyrona, have married and moved out. Julia remains at home (she will marry Lee Thomas Hamilton in 1876). The two younger boys, Edward and Thomas, are missing and two females, Mary and Martha, are listed. See my Blog The King of the Uwharrie for an explanation on Mary and Martha.

The years between 1870 and 1880 saw the Marks children, as with all families, grow up, get married, leave home and start families of their own. Those joyful times of weddings and grandchildren seemed to have been overshadowed by the death of Leah’s husband, William Marks. I don’t know exactly when William Marks died but I do know it was between the dates Feb 1876, when Julia was married and the Census taken in Jun 1880.

The 1880 Census finds Leah still in Eldorado but now a widow, living alone. I can’t help but wonder what Leah saw when she looked back on her life. Was her life filled with happiness or sorrow? Was she glad that she defied her father and followed the man she loved? I suppose we will never know how Leah Caroline felt about it; however, on behalf of all her descendants, we are very glad she found the will to defy her father; otherwise, we all would have never been born.

Michael Fesperman, Leah’s father, died in Mar 1873, just three years after he wrote his will. His oldest son went to probate court to prove his father’s last will and testament but because Michael Fesperman, the busy man that he was, never got around to signing his will, the court would not prove it. Instead, the oldest son, Philip, was appointed Administrator of the estate of his father.

It would seem that not everyone in the family had disowned Leah for running off and marrying William Marks as her brother included her as a rightful heir to the estate of her father, Michael Fesperman.

Leah Caroline Fesperman Marks died after 1880. Thus far, I have not been able to find any death or burial records. Family tradition says that she is buried next to her husband, William Marks, at Prospect Baptist Church on River Road, near the Eldorado community, in an unmarked grave.
Posted by Uwharrie Roots at 4:46 PM